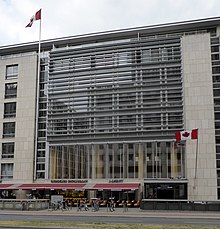 Embassy of Canada in Berlin

Embassy of Germany in Ottawa

Canada–Germany relations are those between Canada and the Federal Republic of Germany. The two countries are close allies and fellow NATO and G7 members.

The earliest contact between Germany and Canada occurred in New France, the area of North America colonized by France in the 17th century. A number of ethnic Germans migrated to the colony during French colonial possession between 1663 and 1763, and mixed in with the French population. The first major German migration to Canada, however, was after the English conquests of Nova Scotia. A significant number of Germans served in the British invading force and subsequently elected to settle in the new lands. The colony's population was mainly French-speaking Roman Catholic Acadians. Since most British settlers preferred to settle in the warmer Southern Colonies, the British administration faced a daunting demographic problem. An aggressive plan to recruit foreign protestants began to balance the population statistics. Most of the attracted settlers came from German duchies and principalities on the Upper Rhine in the present-day Rhineland-Palatinate Bundesland. The Duchy of Württemberg was the major source of these immigrants. Because of this migration, many Nova Scotian towns on the South Shore such as Lunenburg, Kingsburg and Waterloo bear distinctly German names. Many of the names of islands, beaches and points are also German and there are many Lutheran churches.

There was an even larger ethnic German migration to Canada after the American Revolution, where ethnic Germans made up a large proportion of the United Empire Loyalists who fled to Canada. These loyalists and many German mercenaries hired by Britain fought to defend British North America. Some of these mercenaries decided to settle in Canada once their terms expired, and several of the Brunswick regiment settled in Quebec, southwest of Montreal and south of Quebec City. The largest group fleeing the United States were the Mennonites who were subjected to discrimination in the United States for their pacifist beliefs. They moved to what is today southwest Ontario, settling around Berlin, Ontario (now known as Kitchener). This large group also attracted new migrants from Germany drawing some 50,000 of them to the region over subsequent decades. Beginning in 1896, western Canada drew further large numbers of German immigrants, mostly from Eastern Europe. Once again Mennonites were especially prominent, having been persecuted by the Tsarist regime in Russia. Used to the harsh conditions of farming in Russia, many of these settlers were among the most successful in adapting to the Canadian prairies. 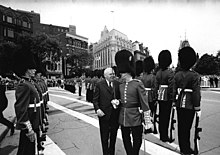 A guard of honour provided by the 1st Battalion, The Canadian Guards during the visit of West German Chancellor Ludwig Erhard to Ottawa in 1964.

Relations between Germany and Canada arguably hit a low point while fighting in the First World War, and then an even lower point with Canada's declaration of war against Nazi Germany in the Second World War. The declaration of war came a week after the British declaration, and was independent of the British declaration. Canadian forces played a major role in the invasion of the continent, with special responsibility in 1944-45 for the liberation of the Netherlands. Although asked by Britain to provide transport planes and air crews for the Berlin Blockade of 1948, Canada refused. However, under the enthusiastic leadership of Liberal Prime Minister Louis St. Laurent it did join NATO in 1949, despite opposition from some intellectuals, the far left, and many French Canadians.[1]

See also: Embassy of Canada in Berlin, Embassy of Germany in Ottawa, and List of Canadian ambassadors to Germany

In addition to its embassy in Ottawa, Germany maintains consulates in Toronto, Montreal and Vancouver. Additional diplomats responsible for specialized files are also accredited from Washington.

In 2006 Germany was the sixth ranked destination of Canadian exports (0.9%) and sixth ranked source of imports to Canada (2.8%).

10% of Canadians claim some German heritage.