Canada–Europe relations are the diplomatic, economic, and cultural ties between Canada and the peoples and states of the European continent.

Prior the Second World War, this referred primarily to bilateral relations with particular countries. However, since 1945 Europe has become increasingly institutionalized, and the Government of Canada deals directly with the major European multilateral organizations.

Canada's relationship with Europe is a consequence of the historical connections generated by colonialism and mass European immigration to Canada. Canada was first colonized by Norse Vikings on the shores of Baffin Island plus those of Newfoundland and Labrador in the Middle Ages. However, centuries later in the Modern Age, it would be mainly colonized by France and, after 1763, it formally joined the British Empire after its conquest in the Seven Years' War. In addition, it also had colonial influence from Spain in British Columbia plus southern Alberta and Saskatchewan. Formal diplomatic ties were not possible between Canada and European countries when Canada was a collection of British colonies, but migration ties continued through the nineteenth and early twentieth centuries.

Traditionally, from the beginnings of Canadian diplomacy in the 1870s to the 1930s, Canadian contacts with European countries were limited. Canada was not fully independent of the British Empire in matters of foreign affairs. Therefore, Canada could not sent ambassadors to European capitals but rather relied on the Canadian High Commissioner in London or the Canadian Legate attached to the British Embassies in Paris, as well as Washington to make contacts with European diplomats.

Travel between Canada and Europe for political leaders was also limited. This began to change during and following the First World War, when Canada was a member of the Entente Powers in alliance with a variety of European states including France, Belgium, Italy, and Russia, and sent troops to France and Belgium. Formal expression of this new relationship emerged after 1919 when Prime Minister Robert Borden attended the Paris Peace Conference, and when Canada joined the League of Nations and sent representatives to its headquarters in Geneva.

Canadian engagement with the League of Nations was relatively weak, however as the government of Mackenzie King mostly pursued a policy of isolationism. Though King did begin to make overseas travel for prime ministers a more regular occurrence, including a visit to Adolf Hitler in Berlin in 1937.[1] 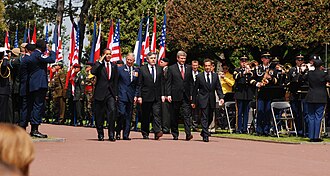 With the onset of the Second World War Canada became intimately involved in the politics of Europe, as a member of the Allies, as a sanctuary for European refugees including the Dutch royal family, and with Canadian troops fighting in France, Belgium, Italy, and the Netherlands. Canada began raising the status of its missions in Europe from legations to embassies in 1944. Canada was a strongly Atlanticist state, and following the war, the new links were institutionalized through the creation of the North Atlantic Treaty Organization which bound Canada to defend any of the (Western) European members of the alliance if it was attacked by the Soviet Union. Relations with "Eastern Europe" (in the sense of the Warsaw Pact) were decidedly cooler.

Economically, Canada still dealt much more with the United Kingdom than the rest of the continent at end of the war, but this began to change quickly because of the post-war economic booms in France and West Germany combined with British relative decline. At the same time Canada's relations with the United States loomed ever larger, so that relations with UK were no longer so important as to be thought of as separate from European relations, as they had been before. This was confirmed by Canadian refusal to back Britain's position in the Suez Crisis of 1957, and Britain's entry into the European Economic Community in 1973 over Canadian (and Australasian) objections. Canada and Britain still continue to have close ties, however, based on shared history and culture, and share the same head of state and are both members of the Commonwealth.

Canada's commitments to the rest of Europe included NATO-related forces stationed in Germany and Norway, and a series of economic agreements with the EEC starting in 1976.

Since the end of the Cold War, Canada has expanded ties with Eastern Europe, including being the first western country to recognize the independence of the Baltic States and Ukraine from the Soviet Union in 1991.

Canada is still a member of the NATO alliance committed to defending its fellow members from an attack anywhere in Europe, however Canadian forces in Germany and Norway have been withdrawn.

Proposals for transatlantic economic and political ties, which Canadian hoped NATO would include in 1949, have not come to fruition. The European Union and the North American Free Trade Association instead represent two divergent trade blocs. However, Canada has signed a free trade agreement with the smaller European Free Trade Association in 2008. As of 2010[update] talks for a Canada - EU FTA are ongoing.