Canada–El Salvador relations refers to the diplomatic relations between the Canada and the Republic of El Salvador. Both nations are members of the Organization of American States and the United Nations.

Diplomatic relations between Canada and El Salvador were established on 29 December 1961.[1] El Salvador opened its embassy in Ottawa in 1973. Initially, Canada accredited an ambassador to El Salvador based in Costa Rica and then from Guatemala. In 1995, Canada opened a diplomatic office in San Salvador before establishing a resident embassy in 2005.[1]

During the Salvadoran Civil War, Canada accepted thousands of Salvadoran refugees fleeing the war. In 1981, Canada cut aid to El Salvador because of concerns about death squads in the country. Aid was renewed in 1985.[2] After the signing of the Chapultepec Peace Accords in January 1992, Canada pledged up to $5 million for poverty alleviation, human rights promotion and democratization in El Salvador.[3]

In January 2001, an earthquake struck El Salvador killing over 900 people. Canada immediately sent the 436 Transport Squadron with aid supplies to El Salvador.[4] Between 2001 and 2010, Canada and El Salvador (along with Guatemala, Honduras and Nicaragua) negotiated the Canada–Central American Four Free Trade Agreement, however, after twelve rounds of negotiations, no agreement had been reached and the free trade agreement remains defunct.[5]

There are direct flights between both nations with Air Transat and Avianca Costa Rica. 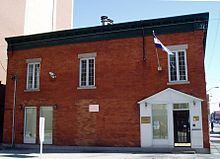 Embassy of El Salvador in Ottawa