Camp David is the country retreat for the president of the United States. It is located in the wooded hills of Catoctin Mountain Park, in Frederick County, Maryland, near the towns of Thurmont, and Emmitsburg, about 62 miles (100 km) north-northwest of the national capital city of Washington, D.C.[1][2][3] It is officially known as the Naval Support Facility Thurmont. Because it is technically a military installation, the staffing is primarily provided by the Seabees, Civil Engineer Corps (CEC), the United States Navy and the United States Marine Corps. Naval construction battalions are tasked with base construction and send detachments as needed.

Originally known as Hi-Catoctin, Camp David was built as a camp for federal government agents and their families by the Works Progress Administration.[4] Construction started in 1935 and was completed in 1938.[5] In 1942, President Franklin D. Roosevelt converted it to a presidential retreat and renamed it "Shangri-La" (for the fictional Himalayan paradise in the 1933 novel Lost Horizon by British author James Hilton).[4][6]

Camp David received its present name in 1953 from Dwight D. Eisenhower, in honor of his father, and grandson, both named David.[7] Eisenhower had the practice golf facility built at Camp David.

The Catoctin Mountain Park does not indicate the location of Camp David on park maps due to privacy and security concerns, although it can be seen through the use of publicly accessible satellite images.[3]

Franklin D. Roosevelt hosted Sir Winston Churchill at Shangri-La in May 1943.[8] Dwight Eisenhower held his first cabinet meeting there on November 22, 1955 following hospitalization and convalescence he required after a heart attack suffered in Denver, Colorado on September 24.[9] Eisenhower met there with Nikita Khrushchev for two days of discussions in September 1959.[10]

John F. Kennedy and his family often enjoyed riding, golf and other recreational activities there, and Kennedy often allowed White House staff and Cabinet members to use the retreat when he or his family were not there.[11] Lyndon B. Johnson met with advisors in this setting and hosted both Australian prime minister Harold Holt and Canadian prime minister Lester B. Pearson there.[12] Richard Nixon was a frequent visitor. He personally directed the construction of a swimming pool and other improvements to Aspen Lodge.[13] Gerald Ford hosted Indonesian president Suharto at Camp David.[14]

Jimmy Carter initially favored closing Camp David in order to save money. Once Carter actually visited the retreat, he decided to keep it.[15] Carter brokered the Camp David Accords there in September 1978 between Egyptian president Anwar al-Sadat and Israeli prime minister Menachem Begin.[8] Ronald Reagan visited the retreat more than any other president.[16] In 1984, Reagan hosted British prime minister Margaret Thatcher.[17] Reagan restored the nature trails that Nixon paved over so he could horseback ride at Camp David.[18] George H. W. Bush's daughter, Dorothy Bush Koch, was married there in 1992, in the first wedding held at Camp David.[19] During his tenure as president, Bill Clinton spent every Thanksgiving at Camp David with his family.[20] In July 2000, he hosted the 2000 Camp David Summit negotiations between Israeli prime minister Ehud Barak and Palestinian Authority chairman Yasser Arafat there.[21][22]

In February 2001, George W. Bush held his first meeting with a European leader, British prime minister Tony Blair, at Camp David to discuss missile defense, Iraq, and NATO.[23] During his two terms in office, Bush visited Camp David 149 times, for a total of 487 days, for hosting foreign visitors as well as a personal retreat.[24] He met there with Blair four times.[24] Among the numerous other foreign leaders he hosted at Camp David[24] were Russian president Vladimir Putin[25][26] and President Musharraf of Pakistan in 2003,[27] Danish prime minister Anders Fogh Rasmussen in June 2006,[21] and British prime minister Gordon Brown in 2007.[28]

Donald Trump hosted Mitch McConnell and Paul Ryan at Camp David while Republicans prepared to defend both houses of Congress in the 2018 midterm elections.[32] The 46th G7 summit was to be held at Camp David on June 10–12, 2020, but was cancelled due to health concerns during the ongoing COVID-19 pandemic.[33] 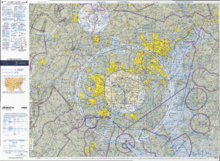 Aviation chart showing restricted airspace in the Washington DC area. Camp David is the light circle to the north.

On July 2, 2011, an F-15 intercepted a civilian aircraft approximately 6 miles (10 km) from Camp David, when President Obama was in the residence. The two-seater, which was out of radio communication, was escorted to nearby Hagerstown, Maryland, without incident.[35]

On July 10, 2011, an F-15 intercepted another small plane near Camp David when Obama was again in the residence; a total of three were intercepted that weekend.[36]