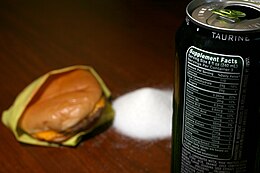 A 710-millilitre (24 US fl oz) energy drink with 330 kilocalories, more than a typical fast-food cheeseburger, and the equivalent of 18 single-serving packets of sugar.

The calorie is a unit of energy widely used in nutrition.[1]

For historical reasons, two main definitions of calorie are in wide use. The small calorie or gram calorie (usually denoted cal) is the amount of heat energy needed to raise the temperature of one gram of water by one degree Celsius (or one kelvin). [2][3] The large calorie, food calorie, or kilocalorie (Cal, calorie or kcal) is the amount of heat needed to cause the same increase in one kilogram of water.[4] Thus, 1 kilocalorie (kcal) = 1000 calories (cal). By convention in food science, the large calorie is commonly called Calorie (with a capital C by some authors to distinguish from the smaller unit).[5] In most countries, labels of industrialized food products are required to indicate the nutritional energy value in (kilo or large) calories per serving or per weight.

Calorie relates directly to the metric system, and therefore to the SI system. It is regarded as obsolete within the scientific community, since the adoption of the SI system, but is still in some use.[1] The SI unit of energy is the joule, with symbol "J": one calorie (small) is defined as exactly 4.184 J; one kilocalorie (large) is 4184 J.

The calorie was first introduced by Nicolas Clément, as a unit of heat energy, in lectures during the years 1819–1824. This was the "large" calorie, viz. modern kilocalorie.[1][6] The term entered French and English dictionaries between 1841 and 1867. It comes from Latin calor, meaning 'heat'.

The use of the kilogram-calorie (kcal) for nutrition was introduced to the American public by Wilbur Olin Atwater, a professor at Wesleyan University, in 1887.[1]

The modern calorie (cal) was first recognized as a unit of the cm-g-s system (cgs) in 1896,[6] alongside the already-existing cgs unit of energy, the erg (first suggested by Clausius in 1864, under the name ergon, and officially adopted in 1882).

Already in 1928 there were serious complaints about the possible confusion arising from the two main definitions of the calorie and whether the notion of using the capital letter to distinguish them was sound.[7] Use of the calorie was officially deprecated by the ninth General Conference on Weights and Measures, in 1948.[8]

The alternate spelling calory is archaic.

The modern (small) calorie is defined as the amount of energy needed to increase the temperature of 1 gram of water by 1 °C (or 1 K, which is the same increment).[2][3] The definition depends on the atmospheric pressure and the starting temperature. Accordingly, several different precise definitions of the calorie have been used.

The two definitions most common in older literature appear to be the 15 °C calorie and the thermochemical calorie. Until 1948, the latter was defined as 4.1833 international joules; the current standard of 4.184 J was chosen to have the new thermochemical calorie represent the same quantity of energy as before.[10]

The calorie was first defined specifically to measure energy in the form of heat, especially in experimental calorimetry.[14]

To facilitate comparison, specific energy or energy density figures are often quoted as "calories per serving" or "kcal per 100 g". A nutritional requirement or consumption is often expressed in calories or kilocalories per day.

In other scientific contexts, the term calorie almost always refers to the small calorie. Even though it is not an SI unit, it is still used in chemistry. For example, the energy released in a chemical reaction per mole of reagent is occasionally expressed in kilocalories per mole.[23] Typically, this use was largely due to the ease with which it could be calculated in laboratory reactions, especially in aqueous solution: a volume of reagent dissolved in water forming a solution, with concentration expressed in moles per litre (1 litre weighing 1 kilogram), will induce a temperature change in degrees Celsius in the total volume of water solvent, and these quantities (volume, molar concentration and temperature change) can then be used to calculate energy per mole. It is also occasionally used to specify energy quantities that relate to reaction energy, such as enthalpy of formation and the size of activation barriers.[24] However, its use is being superseded by the SI unit, the joule, and multiples thereof such as the kilojoule.

In the past, a bomb calorimeter was used to determine the energy content of food by burning a sample and measuring a temperature change in the surrounding water. Today, this method is not commonly used in the United States and has been replaced by calculating the energy content indirectly from adding up the energy provided by energy-containing nutrients of food (such as protein, carbohydrates, and fats). The fibre content is also subtracted to account for the fact that fibre is not digested by the body.[21]