A cacique (Iberian Spanish: [kaˈθike]; Latin American Spanish: [kaˈsike]; Portuguese: [kɐˈsikɨ, kaˈsiki]; feminine form: cacica) translates to "King"[1] or "Prince"[2][3] of an indigenous group, derived from the Taíno word kasike for the pre-Columbian tribal chiefs in the Bahamas, the Greater Antilles, and the northern Lesser Antilles. In the colonial era, Spaniards extended the word as a title for the leaders of practically all indigenous groups that they encountered in the Western Hemisphere. In Hispanic and Lusophone countries, the term also has come to mean a political boss or leader who exercises significant power in the political system known as caciquismo.[4]

Cacique comes from the Taíno word kassiquan, meaning "to keep house".[5] In 1555 the word entered the English language as "Prince".[6] In Taíno culture, the cacique rank was hereditary[7] and sometimes established through democratic means. His importance in the tribe was determined by the size of his tribe rather than his skills in warfare since the Taínos were mostly a peaceable culture. They also enjoyed several privileges for their standing: they lived in a larger rectangular hut in the centre of the village, rather than the circular huts of other villagers, and they had a special sitting place for the areytos (ceremonial dances) and the ceremonial ball game.[8] Similar to other rulers their word was the law and they oversaw a sophisticated level of governance.[9] 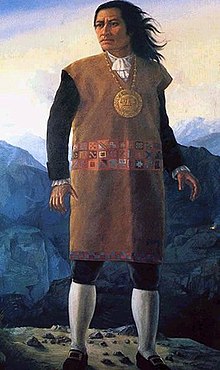 Tupac Amaru II, Andean kuraka or cacique who led a massive rebellion in 1781.

Spaniards extended the usage of cacique to refer to leaders at the town or village level in virtually all indigenous groups in Spanish America.[10] Caribbean caciques who did not initially oppose the Spanish were co-opted into being intermediaries between the Spanish and their communities, but their cooperation was transitional and most revolted, resulting in their deaths in battle or by execution.[11] Two famous early colonial-era caciques are Hatuey (Cuba) and Enriquillo (Hispaniola)[12] who are now national heroes in Cuba and the Dominican Republic. At the base of the monument to Hatuey the historical plaque reads: "To the memory of Chief Hatuey, unforgettable native, precursor of the Cuban fight for freedom, he offered his life, glorifying his ideals while tormented by the flames on 2/2/1512. Monuments Delegation of Yara, 1999". Hatuey was a historical character in the 2010 film Even the Rain.

In central Mexico in the colonial era, the Spanish more successfully utilized the leaders of the much more hierarchically organized indigenous peoples to function as intermediaries in the system of colonial rule. The hierarchy and nomenclature of indigenous leadership there might survive internally within communities, but the Spaniards' designation of caciques did not necessarily correspond to the hereditary indigenous system of leadership.

Elite indigenous men willing to cooperate with the colonial rule replaced those with hereditary and traditional claims to leadership.[13] The Spanish recognized the indigenous nobility as nobles within newly established colonial system, and caciques' status along with their families was reinforced by their being allowed to hold the Spanish noble honorific don and doña. Caciques were among the first to introduce European material culture into Indigenous communities: they built Spanish-style houses, acquired Spanish furnishings, and wore Spanish clothes. They engaged in such Spanish-style commercial enterprises as sheep and cattle ranching and the raising of silkworms. Many even owned Black slaves. They also acquired certain new privileges, such as the right to carry swords or firearms and to ride horses or mules.[14] Some caciques had entailed estates called cacicazgos. The records of many of these Mexican estates are held in the Mexican national archives in a section Vínculos ("entails").[15][16][17] The establishment of Spanish-style town government [cabildos] was used as a mechanism to replace traditional rule. Spanish manipulation of cabildo elections.[18] In some areas the traditional, members hereditary lineages became office holders on the town councils.[19]

By the late colonial era in central Mexico, the term cacique had lost its dynastic meaning in many areas; "cacique status could in some degree buttress a family's prestige, but it could no longer in itself be regarded as a rank of major authority."[20] In a 1769 appeal to the Viceroy of New Spain by a cacique family for restoration of its privileges, they were enumerated: that the cacique should be seated separately from commoners at public functions; he was excused from serving in town government; he was exempted from tribute and other exactions; he was excused from Sunday worship and payments of the half real; his servants were not liable for community labor; he was exempt from incarceration for debt and his property from sequestration; he could be imprisoned for serious crime but not jailed in the public jail; the caciques' names were to be listed among the nobles in official registers; and "all these privileges are to apply equally to the caciques' wives and widows." With Mexican independence in 1821, the special privileges of colonial-era caciques were abolished.[21]

In the Andean region the local term kuraka was used as an alternative to cacique, in contrast to the rest of the Spanish Colonial Americas. After conquering the Inca Empire the Spaniards in the Peruvian viceroyalty had allowed the kurakas or caciques to maintain their titles of nobility and perquisites of local rule so long as they were loyal to the Spanish monarch.[22] In the late eighteenth century, a massive uprising, the Tupac Amaru rebellion (1781), often called the "Great Rebellion", was led by Tupac Amaru II, a kuraka who claimed to be a descendant of the Inca royal line, namely to the last Emperor Thupaq Amaru. At independence in 1825, Simón Bolívar abolished noble titles, but the power and prestige of the kurakas was already in decline following the Great Rebellion.[23] Kuraka rebellions were made since the beginning of the Spanish colonial rule, kurakas from different backgrounds and places of the Andes led uprisings on multiple occasions, being the Tupac Amaru II rebellion, which came after 250 years of colonial rule, the largest of them and the major rebellion in the history of Spain's American empire,[24] nevertheless kuraka revolts would continue years and decades after Tupac Amaru II's uprising such as the Tupac Katari uprising or the Mateo Pumakawa insurrection made during the South American Wars of Independence.

An extension of the term cacique, caciquismo ("boss rule") can refer to a political system dominated by the power of local political bosses, the caciques. In the post-independence period in Mexico, the term retained its meaning of "indigenous" leaders, but also took on a more general usage of a "local" or "regional" leader as well.[25][26] Some scholars make a distinction between caudillos (political strongmen) and their rule, caudillismo, and caciques and caciquismo.[27] One Argentine intellectual, Carlos Octavio Bunge viewed caciquismo as emerging from anarchy and political disruption and then evolving into a "pacific" form of "civilized caciquismo", such as Mexico's Porfirio Díaz (r. 1876-1911).[28] Argentine writer Fernando N.A. Cuevillas views caciquismo as being "nothing more than a special brand of tyrant".[29]

In Spain, caciquismo appeared in late 19th-century Spain and early 20th-century.[30] Writer Ramón Akal González views Galicia in northwest of Spain, as having remained in a continual state of strangulated growth over centuries as a result of caciquismo and nepotism. "Galicia still suffers from this anachronistic caste of caciques."[31] Spanish strongman El Caudillo Francisco Franco (1892-1975) was born in Ferrol in Galicia.

In the Philippines, the term cacique democracy was coined by Benedict Anderson.[32] It has been used to describe the political system where in many parts of the country local leaders remain very strong, with almost warlord-type powers.[33] The Philippines was a colony of Spain from the late sixteenth century until the Spanish–American War of 1898, when the United States assumed control. The U.S. administration subsequently introduced many commercial, political and administrative reforms. They were sometimes quite progressive and directed towards the modernization of government and commerce in the Philippines. However, the local traditional Filipino elites, being better educated and better connected than much of the local population, were often able to take advantage of the changes to bolster their positions.

There is no consensus in the scholarly literature about the origins of caciquismo. Murdo J. MacLeod suggests that the terms cacique and caudillo "either require further scrutiny or, perhaps, they have become so stretched by the diversity of explanations and processes packed into them that they have become somewhat empty generalizations".[34]

Notable native caciques of the Americas