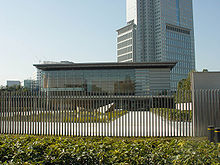 The Prime Minister's Official Residence is where the Cabinet is located

In practice, much of the Cabinet's authority is exercised by the Prime Minister. Under the Constitution, the Prime Minister exercises "control and supervision" over the executive branch, and no law or Cabinet order can take effect without the Prime Minister's countersignature (and the Emperor's promulgation). While Cabinet Ministers in most other parliamentary democracies theoretically have some freedom of action (within the limits of cabinet collective responsibility), the Japanese Cabinet is effectively an extension of the Prime Minister's authority.

According to Article 75 of the Constitution, Ministers of State are not subject to legal action without the consent of the Prime Minister during their tenure of office.

A paulownia flower pattern is routinely considered to be a symbol of the Japanese prime minister and cabinet.

Powers exercised via the Emperor

The members of the current cabinet of Japan headed by the Liberal Democratic Party lawmaker Shinzō Abe as of 11 September 2019 are as follows:[1]