The South American Football Confederation (CONMEBOL, /ˈkɒnmɪbɒl/; Spanish: Confederación Sudamericana de Fútbol;[1] Portuguese: Confederação Sul-Americana de Futebol[2] or CSF) is the continental governing body of football in South America (apart from Guyana, Suriname, and French Guiana), and it is one of FIFA's six continental confederations. The oldest continental confederation in the world, its headquarters are located in Luque, Paraguay, near Asunción. CONMEBOL is responsible for the organization and governance of South American football's major international tournaments. With 10 member football associations, it has the fewest members of all the confederations in FIFA.

CONMEBOL national teams have won nine FIFA World Cups (Brazil five, Uruguay two, and Argentina two), and CONMEBOL clubs have won 22 Intercontinental Cups and four FIFA Club World Cups. Argentina and Uruguay have won two Olympic gold medals each, and Brazil has won one Olympic gold medal. It is considered one of the strongest confederations in the world.

Juan Ángel Napout (Paraguay) was the president of CONMEBOL until 3 December 2015 when he was arrested in a raid in Switzerland as part of the U.S. Justice Department's bribery case involving FIFA. Wilmar Valdez (Uruguay) was interim president until 26 January 2016 when Alejandro Domínguez (Paraguay) was elected president. The Vice presidents are Ramón Jesurum (Colombia), Laureano González (Venezuela), and Arturo Salah (Chile).

In 1916, the first edition of the "Campeonato Sudamericano de Fútbol" (South-American Football Championship), now known as the "Copa América", was contested in Argentina to commemorate the centenary of the Argentine Declaration of Independence. The four participating associations of that tournament gathered together in Buenos Aires in order to officially create a governing body to facilitate the organization of the tournament. Thus, CONMEBOL was founded on 9 July 1916 under the initiative of Uruguayan Héctor Rivadavia Gómez, but approved by the football associations of Argentina, Brazil, Chile, and Uruguay. The first Constitutional Congress on 15 December of that same year, which took place in Montevideo, ratified the decision.

Over the years, the other football associations in South America joined, with the last being Venezuela in 1952. Guyana, Suriname, and the French overseas department of French Guiana, while geographically in South America, are not part of CONMEBOL. Consisting of a French territory, a former British territory, and a former Dutch territory, they are part of the Confederation of North, Central American and Caribbean Association Football (CONCACAF), mainly due to historical, cultural, and sporting reasons. With ten member nations, CONMEBOL is the smallest and the only fully continental land-based FIFA confederation (no insular countries or associates from different continents).

Headquarters of CONMEBOL in Luque, Paraguay 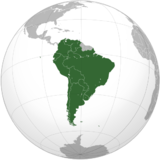 Countries that are members of CONMEBOL

The Intercontinental Cup was jointly organised with UEFA between the Copa Libertadores and the UEFA Champions League winners.

For each tournament, the flag of the host country and the number of teams in each finals tournament (in brackets) are shown.

On 27 May 2015, several CONMEBOL leaders were arrested in Zürich, Switzerland by Swiss police and indicted by the U.S. Department of Justice on charges of corruption, money laundering, and racketeering.[17] Those swept up in the operation include former CONMEBOL presidents Eugenio Figueredo and Nicolás Léoz and several football federations presidents such as Carlos Chávez and Sergio Jadue. On 3 December 2015, the CONMEBOL President Juan Ángel Napout was also arrested.[18]