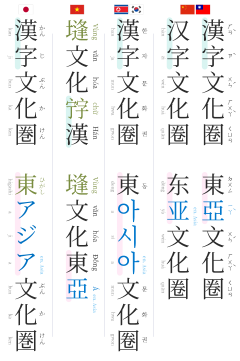 In internationalization, CJK characters is a collective term for the Chinese, Japanese, and Korean languages, all of which include Chinese characters and derivatives in their writing systems, sometimes paired with other scripts. Occasionally, Vietnamese is included, making the abbreviation CJKV, since Vietnamese historically used Chinese characters as well. Collectively, the CJKV characters often include hànzì in Chinese, kanji, kana in Japanese, hanja, hangul in Korean, and hán tự or chữ nôm in Vietnamese.

Other scripts used for these languages, such as bopomofo and the Latin-based pinyin for Chinese, hiragana and katakana for Japanese, and hangul for Korean, are not strictly "CJK characters", although CJK character sets almost invariably include them as necessary for full coverage of the target languages.

Until the early 20th century, Classical Chinese was the written language of government and scholarship in Vietnam. Popular literature in Vietnamese was written in the chữ Nôm script, consisting of borrowed Chinese characters together with many characters created locally. By the end of the 1920s, both scripts had been replaced by writing in Vietnamese using the Latin-based Vietnamese alphabet.[1][2]

The number of characters required for complete coverage of all these languages' needs cannot fit in the 256-character code space of 8-bit character encodings, requiring at least a 16-bit fixed width encoding or multi-byte variable-length encodings. The 16-bit fixed width encodings, such as those from Unicode up to and including version 2.0, are now deprecated due to the requirement to encode more characters than a 16-bit encoding can accommodate—Unicode 5.0 has some 70,000 Han characters—and the requirement by the Chinese government that software in China support the GB 18030 character set.

Although CJK encodings have common character sets, the encodings often used to represent them have been developed separately by different East Asian governments and software companies, and are mutually incompatible. Unicode has attempted, with some controversy, to unify the character sets in a process known as Han unification.

The CJK character sets take up the bulk of the assigned Unicode code space. There is much controversy among Japanese experts of Chinese characters about the desirability and technical merit of the Han unification process used to map multiple Chinese and Japanese character sets into a single set of unified characters.[citation needed]

Libraries cooperated on encoding standards for JACKPHY characters in the early 1980s. According to Ken Lunde, the abbreviation "CJK" was a registered trademark of Research Libraries Group[3] (which merged with OCLC in 2006). The trademark owned by OCLC between 1987 and 2009 has now expired.[4]