The Caribbean Community (CARICOM or CC) is an organisation of fifteen nations and dependencies throughout the Caribbean having primary objectives to promote economic integration and cooperation among its members, to ensure that the benefits of integration are equitably shared, and to coordinate foreign policy.[14] The organisation was established in 1973. Its major activities involve coordinating economic policies and development planning; devising and instituting special projects for the less-developed countries within its jurisdiction; operating as a regional single market for many of its members (Caricom Single Market); and handling regional trade disputes. The secretariat headquarters is in Georgetown, Guyana. CARICOM is an official United Nations Observer.[15]

CARICOM was established by the English-speaking parts of the Caribbean, and currently includes all the independent anglophone island countries plus Belize, Guyana and Montserrat, as well as all other British Caribbean territories and Bermuda as associate members. English was its sole working language into the 1990s. The organization has become multilingual with the addition of Dutch-speaking Suriname in 1995 and the French-speaking Haiti in 2002. Furthermore, it has added Spanish as the fourth official language in 2003.[16] In July 2012, CARICOM announced that they were considering making French and Dutch official languages.[17] In 2001, the heads of government signed a revised Treaty of Chaguaramas that cleared the way to transform the idea of a common market CARICOM into a Caribbean (CARICOM) Single Market and Economy. Part of the revised treaty establishes and implements the Caribbean Court of Justice.

Currently CARICOM has 15 full members, 5 associate members and 8 observers. All of the associate members are British Overseas Territories, and it is currently not established what the role of the associate members will be. The observers are states which engage in at least one of CARICOM's technical committees. Although the group has close ties with Cuba, that nation was excluded due to lack of full democratic internal political arrangement.[citation needed] In 2017 the Republic of Cuba and the Caribbean Community (CARICOM) bloc signed the "CARICOM-Cuba Trade and Economic Cooperation Agreement"[18] to facilitate closer ties.

The countries of CARICOM which are designated as Less Developed Countries (LDCs) are:[21]

The countries of CARICOM which are designated as More Developed Countries (MDCs) are:[21]

The post of Chairman (Head of CARICOM) is held in rotation by the regional Heads of State (for the republics) and Heads of Government (for the realms) of CARICOM's 15 member states. These include: Antigua and Barbuda, Belize, Dominica, Grenada, Haiti, Montserrat, St. Kitts and Nevis, St. Lucia, St. Vincent and the Grenadines, Bahamas, Barbados, Guyana, Jamaica, Suriname, Trinidad and Tobago.

CARICOM contains a quasi-Cabinet of the individual Heads of Government. These heads are given specific specialised portfolios of responsibility for overall regional development and integration.[22]

The goal statement of the CARICOM Secretariat is:

To provide dynamic leadership and service, in partnership with Community institutions and Groups, toward the attainment of a viable, internationally competitive and sustainable Community, with improved quality of life for all.

The Community Council consists of ministers responsible for community affairs and any other Minister designated by the member states in their absolute discretion. It is one of the community's principal organs; the other is the Conference of the Heads of Government. It is supported by four other organs and three bodies.

The 25 designated institutions of CARICOM are as follows:

The Caribbean Court of Justice (CCJ) is based in Port of Spain, Trinidad and Tobago and was chiefly developed to act as a settlement unit for disputes on the functioning of the Caribbean (CARICOM) Single Market and Economy (CSME) (known as "original jurisdiction"). In addition, some of the region's Commonwealth Caribbean member states of CARICOM have opted to supplement original jurisdiction with "appellate jurisdiction" which by practice replaces the Privy Council (in London, United Kingdom) with the CCJ.

The Caribbean Public Health Agency (CARPHA) is a regional public health agency headquartered in Trinidad and Tobago[23] which was established by CARICOM leaders in July 2011[24] and began operation in 2013.[23]

As of 2018, the majority of member states continue to utilize the Privy Council as their final appellate court and three member states do not use the CCJ for either its original jurisdiction or its appellate jurisdiction because they have either not signed the Revised Treaty of Chaguaramas (the Bahamas and Haiti) or are a current United Kingdom Overseas Territory (Montserrat). A handful of various public propositions have been held in several countries of CARICOM polling on public support for transitioning of appellate jurisdiction to the CCJ, and to date the majority of these measures held have failed.

The six designated associate institutions of CARICOM are as follows:

The flag features a blue background, but the upper part is a light blue representing sky and the lower, a darker blue representing the Caribbean Sea. The yellow circle in the centre represents the sun on which is printed in black the logo of the Caribbean Community, two interlocking Cs. The two Cs are in the form of broken links in a chain, symbolising both unity and a break with the colonial past. The narrow ring of green around the sun represents the vegetation of the region.[25]

For CARICOM's 40th anniversary, a competition to compose an official song or anthem for CARICOM was launched in April 2013[27] to promote choosing a song that promoted unity and inspired CARICOM identity and pride. A regional panel of judges comprising independent experts in music was nominated by member states and the CARICOM Secretariat. Three rounds of competition condensed 63 entries to a final three, from which judges chose Celebrating CARICOM by Michele Henderson of Dominica[27] in March 2014.[28] Henderson won a US$10,000 prize.[29] Her song was produced by her husband, Roland Delsol Jr., and arranged by Earlson Matthew. It also featured Michael Ferrol on drums and choral input from the St. Alphonsus Choir. It was re-produced for CARICOM by Carl Beaver Henderson of Trinidad and Tobago.[28]

A second-place entry titled My CARICOM came from Jamaican Adiel Thomas[27] who won US$5,000,[29] and a third-place song titled One CARICOM by Carmella Lawrence of St. Kitts and Nevis,[27] won US$2,500.[29] The other songs from the top-ten finalists (in no particular order) were:

The first official performance of Celebrating CARICOM by Henderson took place on Tuesday 1 July 2014 at the opening ceremony for the Thirty-Fifth Regional Meeting of the Conference of Heads of Government in Antigua and Barbuda.[27]

The celebration of CARICOM Day is the selected day some Caribbean Community (CARICOM) countries officially recognise the commemorative date of signing of the Treaty of Chaguaramas, the agreement that established CARICOM on July 4, 1973. The Treaty was signed in Chaguaramas, Trinidad & Tobago by then leaders of: Barbados, Guyana, Jamaica, and Trinidad and Tobago. CARICOM Day is recognised as an official public holiday in Guyana where the secretariat is based, and is observed on the first Monday of July. The government of Antigua and Barbuda has also implemented CARICOM Day as a holiday.

The day features activities that are organised by government entities such as parades, pageants, and campaigns to educate people about CARICOM.

The Republic of Cuba commemorates with the bloc the initial date of official political relations between CARICOM and CUBA as the second week of December.[30]

CARICOM, originally the Caribbean Community and Common Market, was established by the Treaty of Chaguaramas[31] which took effect on 1 August 1973. The first four signatories were Barbados, Jamaica, Guyana and Trinidad and Tobago.

CARICOM superseded the 1965–1972 Caribbean Free Trade Association (CARIFTA) organised to provide a continued economic linkage between the English-speaking countries of the Caribbean after the dissolution of the West Indies Federation, which lasted from 3 January 1958 to 31 May 1962.

Haiti's membership in CARICOM remained effectively suspended from 29 February 2004 through early June 2006 following the 2004 Haitian coup d'état and the removal of Jean-Bertrand Aristide from the presidency.[32][33] CARICOM announced that no democratically elected government in CARICOM should have its leader deposed. The fourteen other heads of government sought to have Aristide fly from Africa to Jamaica and share his account of events with them, which infuriated the interim Haitian prime minister, Gérard Latortue, who announced he would take steps to take Haiti out of CARICOM. CARICOM thus voted on suspending the participation of Haitian officials from the councils of CARICOM.[34] Following the presidential election of René Préval, Haitian officials were readmitted and Préval himself gave the opening address at the CARICOM Council of Ministers meeting in July.

Since 2013 the CARICOM-bloc and with the Dominican Republic have been tied to the European Union via an Economic Partnership Agreements signed in 2008 known as CARIFORUM.[35] The treaty grants all members of the European Union and CARIFORUM equal rights in terms of trade and investment. Under Article 234 of the agreement, the European Court of Justice handles dispute resolution between CARIFORUM and European Union states.[36]

Thousands of Caricom nationals live within other member states of the Community.

Exclusive Economic Zones of the member states of the CARICOM. Considering them, the total area reaches the 2 300 297 km².

Barbados hosts a large diaspora population of Guyanese, of whom (in 2005) 5,032 lived there permanently as citizens, permanent residents, immigrants (with immigrant status) and Caricom skilled nationals; 3,200 were residing in Barbados temporarily under work permits, as students, or with "reside and work" status. A further 2,000-3,000 Guyanese were estimated to be living illegally in Barbados at the time.[46] Migration between Barbados and Guyana has deep roots, going back over 150 years, with the most intense period of Barbadian migration to then-British Guiana occurring between 1863 and 1886, although as late as the 1920s and 1930s Barbadians were still leaving Barbados for British Guiana.[47]

Relationship to other supranational Caribbean organisations 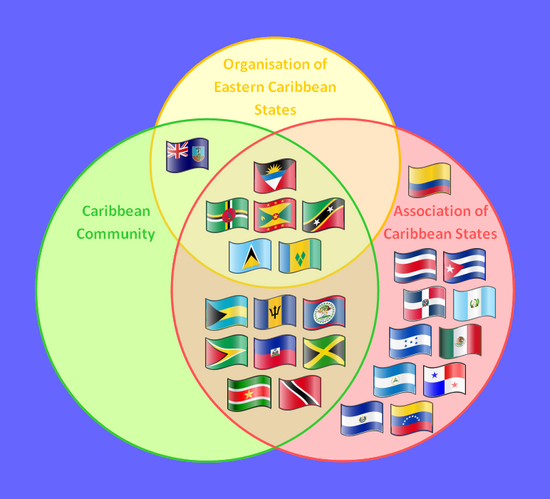 CARICOM was instrumental in the formation of the Association of Caribbean States (ACS) on 24 July 1994. The original idea for the Association came from a recommendation of the West Indian Commission, established in 1989 by the CARICOM heads of state and government. The Commission advocated both deepening the integration process (through the CARICOM Single Market and Economy) and widening it through a separate regional organisation encompassing all states in the Caribbean.[53]

CARICOM accepted the commission's recommendations and opened dialogue with other Caribbean states, the Central American states and the Latin American nations of Colombia, Venezuela and Mexico which border the Caribbean, for consultation on the proposals of the West Indian Commission.[53]

At an October 1993 summit, the heads of state and government of CARICOM and the presidents of the then-Group of Three (Colombia, Mexico and Venezuela) formally decided to create an association grouping all states of the Caribbean basin. A work schedule for its formation was adopted. The aim was to create the association in less than a year, an objective which was achieved with the formal creation of the ACS.[53]

CARICOM was also involved in the formation of the Community of Latin American and Caribbean States (CELAC) on 3 December 2010. The idea for CELAC originated at the Rio Group–Caribbean Community Unity Summit on 23 February 2010 in Mexico.[54][55][56][57][58]

Since 2013, the CARICOM-bloc and the Dominican Republic have been tied to the European Union via an Economic Partnership Agreements known as CARIFORUM signed in 2008.[35] The treaty grants all members of the European Union and CARIFORUM equal rights in terms of trade and investment. Within the agreement under Article 234, the European Court of Justice also carries dispute resolution mechanisms between CARIFORUM and the European Union states.[36]

In May 2016, Caricom's court of original jurisdiction, the CCJ, signed a memorandum of understanding (MOU) with the ACP Legal Association based in Guadeloupe recognising and supporting the goals of implementing a harmonised business law framework in the Caribbean through ACP Legal Association's OHADAC Project.[59]

OHADAC is the acronym for the French "Organisation pour l'Harmonisation du Droit des Affaires en les Caraïbes", which translates into English as "Organisation for the Harmonisation of Business Law in the Caribbean". The OHADAC Project takes inspiration from a similar organisation in Africa and aims to enhance economic integration across the entire Caribbean and facilitate increased trade and international investment through unified laws and alternative dispute resolution methods.[59]