Clarence Douglas Dillon (born Clarence Douglass Dillon; August 21, 1909 – January 10, 2003) was an American diplomat and politician, who served as U.S. Ambassador to France (1953–1957) and as the 57th Secretary of the Treasury (1961–1965). He was also a member of the Executive Committee of the National Security Council (ExComm) during the Cuban Missile Crisis.

Dillon was born on August 21, 1909, in Geneva, Switzerland, the son of American parents, Anne McEldin (née Douglass) and financier Clarence Dillon. Although Dillon grew up as a patrician, his paternal grandfather, Samuel Lapowski, was a poor Jewish emigrant from Poland.[3] After leaving Poland, his grandfather settled in Texas after the American Civil War and married Dillon's Swedish-American grandmother. Dillon's father later changed his family name to Dillon, an Anglicization of "Dylion", his grandmother's maiden name.[3] Dillon's mother was descended from the Graham family, Lairds of Tamrawer Castle at Kilsyth, Stirling, Scotland.[citation needed]

In 1938, be became Vice-President and Director of Dillon, Read & Co., a firm that bore his father's name (Clarence Dillon). After his World War II service on Guam, on Saipan, and in the Philippines, he left the United States Navy as Lieutenant Commander decorated with the Legion of Merit and Air Medal. In 1946 he became chairman of Dillon, Read; by 1952 he had doubled the firm's investments.[2]

Dillon had been active in Republican politics since 1934. He worked for John Foster Dulles in Thomas E. Dewey's 1948 presidential campaign. In 1951 he organized the New Jersey effort to secure the 1952 Republican nomination for Dwight D. Eisenhower. He was also a major contributor to Eisenhower's general election campaign in 1952.[2] 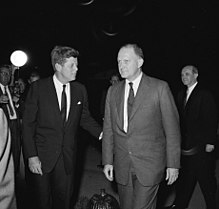 Dillon and Kennedy in August 1961. Dillon had just returned from the conference in Uruguay in which the Alliance for Progress was formalized, and where Dillon did battle with Che Guevara.[7]

Dillon proposed the fifth round of tariff negotiations under the General Agreement on Tariffs and Trade (GATT), conducted in Geneva 1960–1962; it came to be called the "Dillon Round" and led to substantial tariff reduction. Dillon was important in securing presidential power for reciprocal tariff reductions under the Trade Expansion Act of 1962. He also played a role in crafting the Revenue Act of 1962, which established a 7 percent investment credit to spur industrial growth. He supervised revision of depreciation rules to benefit corporate investment.

With his first wife, Dillon collected Impressionist art. He was a longtime trustee of the Metropolitan Museum, serving as its President (1970–1977) and then chairman.[3] He built up its Chinese galleries and served as a member of the Museum's Centennial committee.[8] He personally donated $20 million to the museum and led a fundraising campaign, which raised an additional $100 million.[9]

On March 10, 1931, Dillon married the former Phyllis Chess Ellsworth (1910–1982)[a] in Boston, Massachusetts. Phyllis was the daughter of John Chess Ellsworth[11] and Alice Frances Chalifoux. The couple had two daughters:

Dillon died of natural causes on January 10, 2003, at the New York-Presbyterian Hospital in New York City at the age of 93.[9]

Through his daughter Joan's first marriage, he was a grandfather of Joan Dillon Moseley (b. 1954), and through her second marriage to Prince Charles of Luxembourg,[12] he was a grandfather to Princess Charlotte (b. 1967) and Prince Robert (b. 1968) followed. After Prince Charles' death in 1977, Joan married Philippe-François-Armand-Marie, 8th duc de Mouchy in 1978, without further issue.[13]

In the Brendan DuBois novel Resurrection Day (1999), the Cuban Missile Crisis erupts into a full-scale nuclear war and Washington, D.C. is destroyed. President Kennedy is killed, as is Vice President Johnson, most of the Senate and Congress, and most members of the Kennedy administration. Dillon, the Secretary of the Treasury, is eventually found to have survived the war and becomes the 36th President of the United States.