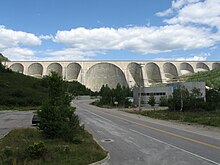 Barrage Daniel-Johnson, a hydroelectric dam on the Manicouagan River.

Côte-Nord (French pronunciation: ​[kot nɔʁ], French for "North Coast" (land area 247,655.33 square kilometres (95,620.26 sq mi)) is the second largest administrative region by land area in Quebec, Canada, after Nord-du-Québec. It covers much of the northern shore of the Saint Lawrence River estuary and the Gulf of Saint Lawrence past Tadoussac.

While most of the region is in the same time zone as the rest of Quebec, the far eastern portion east of the 63rd meridian, including half of Anticosti Island, is officially in the Atlantic Time Zone.

At the 2016 census, the population amounted to 92,518, approximately 1.1% of the province's population,[1] spread across 33 municipalities, various Indian reserves, and a Naskapi reserved land. The towns of Baie-Comeau and Sept-Îles combined amount to a little more than half of the population of the region.

Côte-Nord was created as an administrative region in 1966. Important landmarks of Côte-Nord include Anticosti Island, the Mingan Archipelago, and the Manicouagan Reservoir.

A territorial dispute between Quebec and Newfoundland and Labrador concerning the border between Côte-Nord and Labrador was set on 2 March 1927 by the Judicial Committee of the Privy Council. The boundary was entrenched in the Canadian constitution upon Newfoundland joining confederation in 1949. While this border has not been formally accepted by the Quebec government, the Henri Dorion Commission (Commission d'étude sur l'intégrité du territoire du Québec) concluded in the early 1970s that Quebec no longer has a legal claim to Labrador.[2]

The region's economy is based on mining (mostly iron), lumbering, aluminum production, and tourism. Côte-Nord's fourteen hydroelectric dams, notably the Manicouagan-Outardes complex, supply Hydro-Québec with over 10,500 megawatts of power.

The Côte-Nord region was gradually explored by French colonists during the centuries with the help of natives. However it is worth noting the contribution of Henry de Puyjalon (1841-1905), a pioneer in ecology that as devoted his life to the exploration of this region.