Propane Butane (data page) NFPA 704
Not to be confused with butene, butyne, or Bhutan.
organic compound

Butane (/ˈbjuːteɪn/) or n-butane is an alkane with the formula C4H10. Butane is a gas at room temperature and atmospheric pressure. Butane is a highly flammable, colorless, easily liquefied gas that quickly vaporizes at room temperature. The name butane comes from the roots but- (from butyric acid, named after the Greek word for butter) and -ane. It was discovered by the chemist Edward Frankland in 1849.[6] It was found dissolved in crude petroleum in 1864 by Edmund Ronalds, who was the first to describe its properties.[7][8] 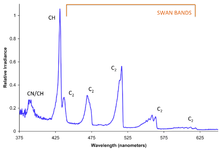 When oxygen is plentiful, butane burns to form carbon dioxide and water vapor; when oxygen is limited, carbon (soot) or carbon monoxide may also be formed. Butane is denser than air.

When there is sufficient oxygen:

When oxygen is limited:

n-Butane is the feedstock for DuPont's catalytic process for the preparation of maleic anhydride:

n-Butane, like all hydrocarbons, undergoes free radical chlorination providing both 1-chloro- and 2-chlorobutanes, as well as more highly chlorinated derivatives. The relative rates of the chlorination is partially explained by the differing bond dissociation energies, 425 and 411 kJ/mol for the two types of C-H bonds.

Normal butane can be used for gasoline blending, as a fuel gas, fragrance extraction solvent, either alone or in a mixture with propane, and as a feedstock for the manufacture of ethylene and butadiene, a key ingredient of synthetic rubber. Isobutane is primarily used by refineries to enhance (increase) the octane number of motor gasoline.[10][11][12][13]

When blended with propane and other hydrocarbons, it may be referred to commercially as LPG, for liquefied petroleum gas. It is used as a petrol component, as a feedstock for the production of base petrochemicals in steam cracking, as fuel for cigarette lighters and as a propellant in aerosol sprays such as deodorants.[14]

Very pure forms of butane, especially isobutane, can be used as refrigerants and have largely replaced the ozone-layer-depleting halomethanes, for instance in household refrigerators and freezers. The system operating pressure for butane is lower than for the halomethanes, such as R-12, so R-12 systems such as in automotive air conditioning systems, when converted to pure butane will not function optimally and therefore a mix of isobutane and propane is used to give cooling system performance comparable to R-12.

Butane is also used as lighter fuel for a common lighter or butane torch and is sold bottled as a fuel for cooking, barbecues and camping stoves. Butane canisters global market is dominated by South Korean manufacturers.[15]

As fuel, it is often mixed with small amounts of hydrogen sulfide and mercaptans which will give the unburned gas an offensive smell easily detected by the human nose. In this way, butane leaks can easily be identified. While hydrogen sulfide and mercaptans are toxic, they are present in levels so low that suffocation and fire hazard by the butane becomes a concern far before toxicity.[citation needed] Most commercially available butane also contains a certain amount of contaminant oil which can be removed through filtration but which will otherwise leave a deposit at the point of ignition and may eventually block the uniform flow of gas.[16] Contaminants are not used in fragrance extraction[clarify] and butane gases can cause gas explosions in poorly ventilated areas if leaks go unnoticed and are ignited by spark or flame.[citation needed]

Inhalation of butane can cause euphoria, drowsiness, unconsciousness, asphyxia, cardiac arrhythmia, fluctuations in blood pressure and temporary memory loss, when abused directly from a highly pressurized container, and can result in death from asphyxiation and ventricular fibrillation. It enters the blood supply and within seconds produces intoxication.[17] Butane is the most commonly abused volatile substance in the UK, and was the cause of 52% of solvent related deaths in 2000.[18] By spraying butane directly into the throat, the jet of fluid can cool rapidly to −20 °C (−4 °F) by expansion, causing prolonged laryngospasm.[19] "Sudden sniffer's death" syndrome, first described by Bass in 1970,[20] is the most common single cause of solvent related death, resulting in 55% of known fatal cases.[19]

A small amount of nitrogen dioxide, a toxic gas, results from burning butane gas, along with any combustion in the earth's atmosphere, and represents a human health hazard from home heaters and stoves.[21]