The main campuses of Simon Fraser University and the British Columbia Institute of Technology are located in Burnaby. Metropolis at Metrotown is the largest mall in British Columbia, and second largest in Canada. It is home to high-tech companies such as Ballard Power (fuel cell), Clio (legal software), D-Wave (quantum computing), General Fusion (fusion power), Electronic Arts Vancouver, and Capcom Canada.

The city is served by the Expo Line and the Millennium Line. Metrotown station in downtown Metrotown is the second-busiest station in regional Vancouver's Skytrain system as of 2018.[2]

Burnaby is the original home to Halkomelem and Squamish-speaking Central Coast Salish Nations. Local landmarks such as Burnaby Mountain, Deer Lake, and Brunette River feature prominently in Indigenous history passed down through oral traditions.[3] The northern shorelines of Burnaby, along the second narrows of Burrard Inlet was site of an ancient battle between the attacking Lekwiltok and the defending Musquem according to Chief Charlie Qiyəplenəxw.[4]

The Coast Salish people living in BC and Washington state numbered more than 100,000 people, a level of population density only supported by agriculture in other geographies.[5] Techniques to preserve and store surplus food sustained a hierarchical society. Burnaby's marshlands along its rivers and lakes were cranberry harvesting areas for numerous villages some numbering over 1000 residents.[6] Indigenous people travelled through Burnaby to reach the mouth of Brunette and Fraser River for the bountiful fishing seasons, eulachon in the spring and sockeye salmon in the late summer. Early explorers and fur traders introduced diseases that decimated the Indigenous population. This false appearance of Burnaby as a vast open space, along with traditional Indigenous farming techniques which did not permanently alter the landscape, meant Indigenous land in Burnaby was mislabeled as Terra Nullius.[7]

The Fraser Canyon Gold Rush of 1858, the first of many gold rushes in British Columbia, brought over 30,000 fortune seekers including many American miners. The fear of an impending annexation by the United States, led to the creation of the Colony of British Columbia in 1858 and the establishment of New Westminster as its capital.[8]

Settlers in Burnaby acquired land through a process called pre-emption which allowed people to claim a piece of land by clearing forests and building houses. Pre-emption was excluded from Indigenous people. Royal Engineers dispossessed land from Indigenous people with the assistance of military force including the original routes of North Road, Kingsway, Canada Way, and Marine Drive. Logging permits given to settlers destroyed the forests of southern Burnaby which had provided vital sustenance for Indigenous people.[9]

The City of Burnaby is named after Robert Burnaby, Freemason, explorer, and legislator. He was previously private secretary to Colonel Richard Moody, the first land commissioner for the Colony of British of Columbia.[10][11] In 1859, Burnaby surveyed a freshwater lake in the city's geographic centre. Moody named it Burnaby Lake.

Burnaby was established in 1891 and incorporated a year later in 1892. In the same year, interurban tram between Vancouver and New Westminster began construction.[12]

The expanding urban centres of Vancouver and New Westminster influenced the growth of Burnaby. It developed as an agricultural area supplying nearby markets. Later, it evolved into an important transportation corridor between Vancouver, the Fraser Valley and the Interior. The introduction of the Skytrain's Expo Line cemented this trend into the 21st century.

As Vancouver expanded and became a metropolis, Burnaby was one of the first-tier suburbs of Vancouver, along with North Vancouver and Richmond. During the suburbanization of Burnaby, "Mid-Century Vernacular" homes were built by the hundreds to satisfy demand by new residents. The establishment of British Columbia Institute of Technology (BCIT) in 1960 and Simon Fraser University (SFU) in 1965 helped Burnaby gradually become more urban in character. In 1992, one hundred years after its incorporation, Burnaby officially became a city.[13]

Since the 1970s, Burnaby has seen a decline in resource sectors and a subsequent rise of high value-added services and technology sectors. The presence of BCIT and SFU promoted research & development in the area. For example, manufacturing plants near Still Creek closed in the late 1970s, only to reopen few years later as film production studios.[14] The continued expansion of media production in Burnaby contributed to Hollywood North.

Geography and land use

Burnaby occupies 98.60 square kilometres (38.07 sq mi) and is located at the geographic centre of the Metro Vancouver area and home to the Metro Vancouver regional government in Metrotown. Situated between the city of Vancouver on the west and Port Moody, Coquitlam, and New Westminster on the east, Burnaby is bounded by Burrard Inlet and the Fraser River on the north and south, respectively. Burnaby, Vancouver and New Westminster collectively occupy the major portion of the Burrard Peninsula. The elevation of Burnaby ranges from sea level to a maximum of 370 metres (1,210 ft) atop Burnaby Mountain. Due to its elevation, the city of Burnaby typically has quite a bit more snowfall during the winter months than nearby Vancouver or Richmond. Overall, the physical landscape of Burnaby is one of hills, ridges, valleys and an alluvial plain. The land features and their relative locations have had an influence on the location, type and form of development in the city.

Burnaby is home to many industrial and commercial firms. British Columbia's largest (and Canada's second largest) commercial mall, the Metropolis at Metrotown, is located in Burnaby. Still, Burnaby's ratio of park land to residents is one of the highest in North America. It also maintains some agricultural land, particularly along the Fraser foreshore flats in the Big Bend neighbourhood along its southern perimeter.

Burnaby's Simon Fraser University weather station is located 365 metres (1,198 ft) above sea level on Burnaby Mountain. Therefore, climate records are cooler and wetter, with more snowfall, as compared to the rest of the city.

The SkyTrain rapid transit system, based in Burnaby, crosses the city from east to west in two places: the Expo Line (completed in 1986) crosses the south along Kingsway and the Millennium Line (completed in 2002) follows Lougheed Highway. The SkyTrain has encouraged closer connections to New Westminster, Vancouver, and Surrey, as well as dense urban development at Lougheed Town Centre on the city's eastern border, at Brentwood Town Centre in the centre-west and, most notably, at Metrotown in the south.

Major north–south streets crossing the City include Boundary Road, Willingdon Avenue, Royal Oak Avenue, Kensington Avenue, Sperling Avenue, Gaglardi Way, Cariboo Road, and North Road. East–west routes linking Burnaby's neighbouring cities to each other include Hastings Street, Barnet Highway, the Lougheed Highway, Kingsway (which follows the old horse trail between Vancouver and New Westminster), Canada Way and Marine Drive/Marine Way. Douglas Road, which used to cross the city from northwest to southeast, has largely been absorbed by the Trans-Canada Highway and Canada Way. Since the 1990s, Burnaby has developed a network of cycling trails. It is also well served by Metro Vancouver's bus system, run by the Coast Mountain Bus Company, a division of TransLink.

The Brentwood neighbourhood, with Capitol Hill in the distance

While Burnaby occupies about 4 percent of the land area of the Greater Vancouver Regional District, it accounted for about 10 percent of the region's population in 2001. It is the third most populated urban centre in British Columbia (after Vancouver and Surrey) with an estimated population of 249,197 (2017).

Similar to Greater Vancouver, Burnaby has always had diverse ethnic and immigrant communities. For example, North Burnaby near Hastings Street has long been home to many Italian restaurants and recreational bocce games. Metrotown's high-rise condominium towers in the south have been fuelled in part by recent arrivals from China (Hong Kong and Macau), Taiwan, and South Korea. According to the 2006 Census, 54% of Burnaby residents have a mother tongue that is neither English nor French.

Politically, Burnaby has maintained a left-wing city council closely affiliated with the provincial NDP and school board for many years, while sometimes electing more conservative legislators provincially (for the Social Credit and BC Liberal parties) and federally (for the Reform, Alliance, and Conservative parties). Its longest-serving politician had been Svend Robinson of the New Democratic Party (NDP), Canada's first openly gay member of Parliament, but after 25 years and seven elections he resigned his post in early 2004 after stealing and then returning an expensive ring. Burnaby voters endorsed his assistant, Bill Siksay, as his replacement in the spring 2004 Canadian federal election. In the May 2013 provincial election, residents of the city sent 3 NDP MLAs and one Liberal MLA to the British Columbia legislature. The NDP MLA for Burnaby-Lougheed, Jane Shin, faced controversy after the election for misrepresenting herself as a physician while not having completed a medical residency nor holding a licence to practise medicine.[22]

According to a 2009 survey by Maclean's magazine, Burnaby is Canada's best run city. The survey looks at a city's efficiency, the cost of producing results, and the effectiveness of its city services.[23] However, Maclean's does note that Burnaby has one of the worst municipal voter turnouts in the country, 26 per cent. In 2015, the Canadian Federation of Independent Business (CFIB) included Burnaby as a Vancouver periphery to rank eighth for entrepreneurial communities.[24] 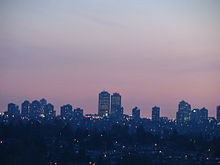 Metrotown at sunset, as seen from Lochdale

Metropolis mall located in Metrotown neighbourhood, the Downtown of Burnaby,[25] is the largest mall in British Columbia with West Vancouver's Park Royal in the second place. It is the fifth largest in Canada behind the first place West Edmonton Mall located in Edmonton, Alberta. Despite its size, Metropolis mall was the second most visited mall in Canada in 2017 and third most visited in 2018.[26]

The city's main stadium, Swangard Stadium, is located in Central Park (Burnaby). It was completed in 1969. The stadium was home to Vancouver 86ers (now Vancouver Whitecaps) in the Canadian Soccer League from 1986 to 2010, when the team relocated to BC Place to play in the Major League Soccer.

Burnaby Velodrome hosted the National Junior and U17 Track Championship in 2014. 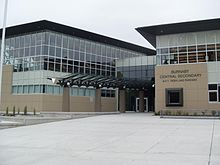 Simon Fraser University's main campus, with more than 30,000 students and 950 staff, is located atop Burnaby Mountain (elevation 370 metres (1,210 ft)). In Maclean's 2020 rankings, the university placed first in their comprehensive university category, and ninth in their reputation ranking for Canadian universities.[28] Burnaby gondola, operating between the main campus and Production Way–University station has been included in TransLink (British Columbia)'s 10-Year Investment Plan in 2018.

British Columbia Institute of Technology's main campus in Burnaby, home to more than 49,000 full-time and part-time students, was established in 1964. A new $78 million, net-zero emission Health Science Centre, expected to open in late 2021, will accommodate 7000 students.[29]

The city has over 24,000 students throughout the 41 elementary schools and 8 secondary schools managed by School District 41. It also has a Community and Adult Education Department and an International Students Programme.

Burnaby is home to multiple museums highlighting the diverse history and culture of the city. Burnaby Village Museum is a 10-acre, open-air museum preserving a 1920s Canadian village. The Nikkei National Museum & Cultural Centre which includes a Japanese garden opened in 2000 to promote awareness and understanding of Japanese Canadian culture. The Museum of Archaeology and Ethnology is located within the Simon Fraser University campus at the top of Burnaby Mountain.

Burnaby Public Library was first established in 1954. It currently has 4 locations throughout the city including the central Bobbie Prittie Metrotown branch in downtown Burnaby. The library system holds over 3 million items in circulation, with more than 5,000 visitors per day.

Many cultural facilities are located in or around Deer Lake Park, including the Burnaby Art Gallery, Shadbolt Centre for the Arts, and the Burnaby Village Museum. 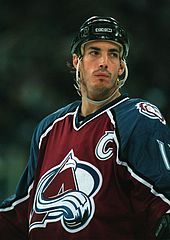 Joe Sakic, the former captain for the Colorado Avalanche 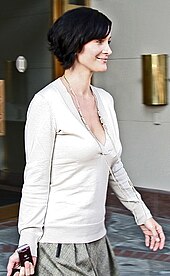 Actress Carrie-Anne Moss, from movies such as The Matrix trilogy and Memento