Bulgarian Canadians (Bulgarian: канадски българи, kanadski balgari) are Canadian citizens or residents from Bulgaria or people of Bulgarian descent. According to the 2016 Census there were 34,560[1] Canadians who claimed Bulgarian ancestry, an increase compared to the 27,260[4] of the 2006 Census.

Mass Bulgarian emigration to Canada began in the late 1890s and the early 20th century. Bulgarians primarily settled in Canada's industrial cities, mostly Toronto, Ontario, which was a major centre of Bulgarian migration to North America. Between 1900 and 1944, 19,955 people from Bulgaria settled in Canada; however, this number excludes the mass Bulgarian migration from Ottoman and later Serbian and Greek-ruled Macedonia, Dobruja, southern Thrace, the Western Outlands and Bessarabia, which was indeed the bulk of Bulgarian emigration to Canada.[5] The largest wave of migration from the Kingdom of Bulgaria to Canada was in 1912, when 6,388 people arrived in that country. Other significant waves were those of 1914, consisting of 4,512 people, and 1907–09, which numbered 2,529.[6]

The first organization of Bulgarians in Canada, the Zhelevo Bulgarian Brotherhood[8] or Zhelevo Benevolence Brotherhood was established in 1907 in Toronto by emigrants from Zhelevo (Antartiko) in Aegean Macedonia. Other Bulgarian organizations were soon established by emigrants from Zagorichani (Vassiliada), Oshtima (Trigono), Smardesh (Krystallopigi), Gabresh (Gavros), Banitsa (Vevi), Buf (Akritas) and Tarsie (Trivuno), all villages in Aegean Macedonia.[8] Bulgarian emigrants from Murgash near Tsaribrod and Bansko also established emigrant organizations. Most such communities were founded in Toronto, though some were based in other Ontario towns like Kitchener, Windsor and Courtland.[8]

The foundations of the Bulgarian Orthodox community in Canada were laid down in 1908 with the first Bulgarian ecclesiastical mission in North America. The priests Hristo Karabashev and hieromonk Theophylactus, who first visited the United States, arrived in Toronto in 1910 and established what is today the Sts. Cyril and Methodius Macedono-Bulgarian[10] Orthodox Parish, which until 1945 remained the only such community in Canada.[11] 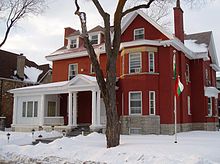 Embassy of Bulgaria in Ottawa