The Buick V8 is a family of V8 engines produced by the Buick division of General Motors between 1953 and 1981. The first version replaced the Buick straight-eight. Displacements vary from 215 cu in (3.5 L) (for the division's unique all-aluminum early 1960s engine) to 455 cu in (7.5 L) for its last big block in 1976. All are naturally aspirated OHV pushrod engines, except for an optional turbocharged version of the short-lived 215 used in the 1962-63 Oldsmobile Cutlass.

Some of these Buick V8s, such as the 350, 400, and 455, had the same displacements as those from other GM divisions, but were otherwise entirely different engines.

Buick's first generation of V8 was offered from 1953 through 1956. It was an OHV pushrod engine like the then-new Oldsmobile "Rocket V8". It became known as the "nailhead" for the unusual vertical alignment of its small-sized valves, features that were the result of putting both valves on the intake manifold side of the "pent-roof" combustion chamber used in this engine series. (Originally, it was known to hot rodders as the “nail valve” because the valves had long stems and small heads which made them look like nails.)[1] To offset the smaller-sized valves and restrictive intake- and exhaust-port diameters, the nailhead V8 family used a camshaft with greater lift and duration. The small-diameter intake runners allowed these engines to develop high torque, with many exceeding one foot-pound per cubic inch, exceptional for the time. All of the nailhead designs have a 4.75 in (121 mm) bore spacing.

The 264 cu in (4.3 L) produced in 1954 and 1955 was a direct replacement for the 263 straight-eight and the only engine available for the economy "Special" series during its run. The smallest displacement Nailhead, it is a small-bore version of the 322, sharing stroke and deck height but having its own 3.625 in (92.1 mm) bore.

Buick's second variation of the nailhead was produced from 1957–1966. 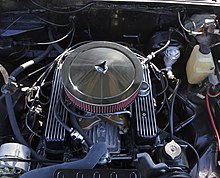 The 401/400 became Buick's full-size and later intermediate muscle car powerplant of choice, used in the company's Skylark Gran Sport and Buick Wildcat models, among others. The engine was variously designated the Wildcat 375, Wildcat 410, and Wildcat 445 depending on the foot-pounds of torque each version produced. The Wildcat 410 was the two-barrel carbureted engine, standard on the 1962-63 LeSabre. The Wildcat 375 was a no-cost option for the 1962-63 LeSabre that used a lower compression ratio to run on lower-octane fuel. The various Wildcat engines had decals on their air cleaners indicating their version; however, the four-barrel edition of the 1966-67 small-block Buick 340 V8 was also labeled Wildcat 375 on its air cleaner, but was not a nailhead engine.

In an effort to overcome the restrictive exhaust-port design of the nailhead, Buick drag racing enthusiasts in the 1960s adapted superchargers with a custom camshaft to feed intake air in through the exhaust ports; the larger intake ports became the exhaust outlets. 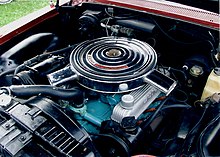 Four-barrel carburetion was standard on the basic 425, called the Wildcat 465 for the foot-pounds of torque it developed. The Super Wildcat (Regular Production Option {RPO}-coded Y48) was available on the 1965 Riviera Gran Sport and 1966 Wildcat GS which included two four-barrel carburetors and matching intake manifold. Coded "MW", these parts were delivered in the car's trunk for dealer installation. Toward the end of the 1966 model year, in approximately May 1966, Buick offered the Super Wildcat 465 with factory-installed dual 4-barrel Carter AFB carburetors as an "MZ" option. Only one hundred seventy-nine 1966 Riviera GS cars were built with the MZ package. 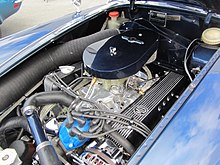 In 1961, Buick unveiled an entirely new small V8 engine with aluminum cylinder heads and cylinder block. Lightweight and powerful, the aluminum V8 also spawned a turbocharged version, (only in the 1962–63 Oldsmobile Cutlass), which together with the turbocharged Corvair Spyder, also introduced in 1962, were the first ever offered in a passenger car. It became the basis of a highly successful cast iron V6 engine, the Fireball. The all-aluminum V8 engine was dropped after the 1963 model year, but was replaced with a very similar cast-iron-block aluminum-head version for one year, and then in all-iron versions. Bore spacings for all variants of the SBB are 4.24 in (107.7 mm).

GM experimented with aluminum engines starting in the early 1950s. Aluminum Company of America (ALCOA) was pushing all automakers to use more aluminum. An early-development supercharged version of the 215-cubic-inch (3.5 L) V8 was used in the 1951 Le Sabre concept car,[2] and the 1953 Buick Roadmaster concept car, and work on a production unit commenced in 1956. Originally intended for 180-cubic-inch (2.9 L) displacement, Buick was designated by GM as the engine design leader and decided to begin with a larger, 215-cubic-inch (3.5 L) size, which was deemed ideal for the new senior compact cars introduced for the 1961 model year. This group of cars was commonly referred to as the B-O-P group — for Buick-Olds-Pontiac — or the Y-bodies.

Oldsmobile and Pontiac each used an all-aluminum 215 on its senior compact cars, the Oldsmobile F-85, Cutlass and Jetfire, and Pontiac Tempest and LeMans. Pontiac used the Buick version of the 215, however back before the mid '70s the engine was very much associated with the brand and Pontiac sold few cars with the Buick engine, which Pontiac only used for 1961 and 1962, besides the Pontiac 4 cylinder engine which was half of the famous 389 V-8 made the same HP with its 4bbl. 4 cylinder as the Buick V-8 ; Oldsmobile had its own version. The Oldsmobile version of this engine, although sharing the same basic architecture, had cylinder heads and angled valve covers designed by Oldsmobile engineers to look like a traditional Olds V8 and was produced on a separate assembly line. Among the differences between the Oldsmobile and Buick versions was weight, being somewhat heavier, at 350 lb (160 kg). The major design differences were in the cylinder heads: Buick used a 5-bolt pattern around each cylinder where Oldsmobile used a 6-bolt pattern and a wedge combustion chamber which allowed larger valves. The sixth bolt was added to the intake manifold side of the head, one extra bolt for each cylinder, meant to alleviate a head-warping problem on high-compression versions. This meant that Buick heads would fit on Oldsmobile blocks, but not vice versa. Changing the compression ratio on an Oldsmobile 215 required changing the heads, but on a Buick 215, only the pistons, which was less expensive and simpler. For that reason, the more common Buick version (which looks like a traditional nailhead V8) has emerged as more desirable to some.[citation needed] The Olds wedge-shaped/quench combustion chambers/pistons are more compatible with modern low-octane/low-lead motor fuels than the Buick 'hemispherical'-shaped combustion chambers and domed pistons.[citation needed] The previous statement is incorrect, the 215 Buick only used "dished head" pistons even in the highest compression models, all Buick 215's have a 37cc wedge combustion chamber. Later Rover versions of the aluminum block and subsequent Buick iron small block 300s with aluminum, then iron heads, 34 (0 and 350 with iron heads) went to a 4-bolt-per-cylinder pattern.[5]

The great expense of the aluminum engine led to its cancellation after the 1963 model year.[7] The engine had an abnormally high scrap ratio due to hidden block-casting porosity problems,[7] which caused serious oil leaks. Another problem was clogged radiators from antifreeze mixtures incompatible with aluminum.[7] It was said that one of the major problems was because the factory had to make extensive use of air gauging to check for casting leaks during the manufacturing process and was unable to detect leaks on blocks that were as much as 95% complete.[7] This raised the cost of complete engines to more than that of a comparable all cast-iron engine. Casting-sealing technology was not advanced enough at that time to prevent the high scrap rates.[7]

The 215's very high power-to-weight ratio made it immediately interesting for automobile and boat racing. Mickey Thompson entered a stock-block 215-powered car in the 1962 Indianapolis 500. From 1946-1962, there had not been a single stock-block car in this race. In 1962, the 215 was the only non-Offenhauser-powered entry in the field.[7] Rookie driver Dan Gurney qualified eighth and raced well for 92 laps before retiring with transmission problems.[7]

Surplus engine blocks of the Oldsmobile F85 version formed the basis of the Australian Formula One Repco V8[7] used by Brabham to win the 1966 Formula One world championship, although only the earliest engines had any Oldsmobile components.[7] The majority of Repco RB620 engines were cast and built in-house at Repco.[7]

Rights to these engines were purchased by the British Rover Company and used in the 1967 Rover P5B that replaced the 3 L straight six Rover engined P5. Throughout the years, the Rover Co. which became part of British Leyland in 1968, and its successor companies constantly improved the engine making it much stronger and more reliable. Capacities ranged from 3.5 to 5.0 L (215 to 307 cu in). This engine was used for V8 versions of the MGB GT known as the GTV8. Rover also used the engine in the 1970 Range Rover. Morgan used the Rover version in its Plus 8.[8] American 215s have also been engine swapped into countless other platforms, especially Chevrolet Vegas[9] and later British cars including the MG RV8 in the 1990s,[10] Triumph TR8, and various sports sedans and sports cars by the MG Rover Group and specialist manufacturers such as TVR. The engine remains well-supported by enthusiast clubs, specialist parts suppliers, and by shops that specialize in conversions and tuning.

In the mid-1980s, hot rodders discovered the 215 could be stretched to as much as 305 cu in (5.0 L), using the Buick 300 crankshaft, new cylinder sleeves, and an assortment of non-Buick parts.[11] It could also be fitted with high-compression cylinder heads from the Morgan Plus 8. Using the 5 liter Rover block and crankshaft, a maximum displacement of 317.8 cu in (5.2 L) is theoretically possible.[12] 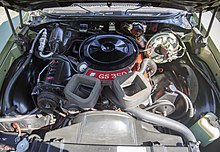 The major differences of the 350 in comparison to other GM V8s are Buick's "deep-skirt" engine block construction, the use of cast iron with increased nickel content, an external oil pump, a forward-mounted distributor, under-square cylinder bore sizing, 3 in (76.2 mm) crankshaft main journals, and 6.385 in (162.2 mm) connecting rods. The Buick 350 also shares an integrated aluminum timing cover, which incorporates the oil pump mechanisms, leaving the oil filter exposed to oncoming air for added cooling. The engine garnered a reputation as rugged and durable,[14] and some of its design characteristics are found in other Buick-designed GM engines, such as the 231 cu in (3.8 L) V6 and its 3800 descendants. Of all the GM "350s", the Buick has the longest piston stroke. This design characteristic made the engine significantly wider than the others — essentially the same as the Buick big-blocks, which have the shortest stroke of the GM big-blocks.

The 350 was used by Kaiser-Jeep and AMC Jeep in the Jeep Gladiator and Wagoneer models from 1968–71;[15] in these applications, the engine was billed as the Dauntless V8. 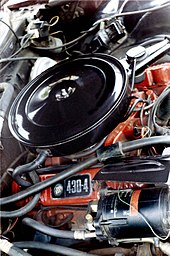 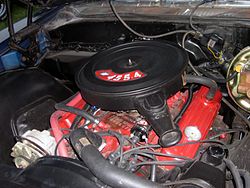 The 455 was one of the first "thin-wall casting" engine blocks at GM, and because of this[35] advance in production technology, it weighs significantly less than other engines of comparable size (for example, 150 lb (68 kg) less than a Chevrolet 454[35] and only 25 lb (11 kg) more than a Chevrolet 350).[citation needed]

In the mid-1970s Buick's 400/430/455 big blocks became unable to meet fuel economy/emission requirements and were phased out, with the Buick 350 remaining as a factory option until 1980. In their place were a variety of GM V8s were offered, both as standard equipment and factory options. These included:

From the 1950s-1970s, each GM division had its own V8 engine family. Many were shared among other divisions, but each design is most-closely associated with its own division:

GM later standardized on the later generations of the Chevrolet design: