The Buffalo Bisons are a Minor League Baseball team of the International League (IL) and the Triple-A affiliate of the Toronto Blue Jays. They are located in Buffalo, New York, and play their home games at Sahlen Field, the highest-capacity Triple-A ballpark in the United States.

Forbes valued the Buffalo Bisons at US$34 million in 2016, making it the 15th-most valuable Minor League Baseball franchise.[3]

Sahlen Field, home of the Bisons since 1988

In 1979, by which point the Braves had left town, the Double-A Eastern League's Jersey City A's were forced to leave their city due to the decrepitude of that city's Roosevelt Stadium and opted to move to Waterbury, Connecticut, a city that already had an Eastern League team. With Mayor Jimmy Griffin, Canisius College baseball coach Don Colpoys, broadcaster Stan Barron[4] and WNY umpire Peter Calieri leading the effort, the league awarded the extra franchise to Buffalo, and the Bisons (taking on the previous team's name and history) returned to the field. Robert E. Rich Jr. purchased the team in 1983.

After six seasons in the Eastern League, the Bisons rejoined the Triple-A ranks in 1985, joining the American Association when the Wichita Aeros' franchise rights were transferred to Buffalo. The team moved to the newly built Pilot Field (now Sahlen Field) in 1988. When, as part of a reorganization of Triple-A baseball, the American Association folded after the 1997 season, Buffalo joined the International League.

Since their return to Triple-A baseball in 1985, the Bisons have qualified for the playoffs several times. In 2004, although the Bisons were 10 games behind the first-place team in June, the Bisons won their division. Buffalo won its first-round playoff, against the Durham Bulls, and advanced to the Governors' Cup Finals, in which they had home field advantage over the Richmond Braves. The remnants of Hurricane Ivan caused major flooding problems in Richmond and the entire series was played in Buffalo. The Bisons defeated the Braves in four games and won the Governors' Cup for the second time since 1998. In 2005, Buffalo won the North Division and played the Indianapolis Indians in the first round, winning the first two games in Indianapolis, but losing all three remaining games. With many of its players shuffled to the Cleveland Indians throughout the final months of the season, the Bisons failed to qualify for the playoffs in 2006. In 2007, Buffalo again failed to clinch a playoff spot, marking the first time since Buffalo was parented with the Pittsburgh Pirates that the Bisons missed the playoffs in back-to-back seasons. The team has not reached the playoffs since then.

After the 2008 season, Buffalo parted ways with Cleveland, as the Indians signed an affiliation agreement with the Columbus Clippers beginning in 2009. The Bisons then signed a two-year agreement to be the top home for New York Mets prospects.[5]

On December 16, 2008, the Mets officially announced that Ken Oberkfell would be the Bisons new manager for 2009. At the same press conference, the Bisons also unveiled their new logo. The logo paid homage to baseball's history in the city of Buffalo with the city's skyline in the background. The logo, along with the new colors of blue and orange, closely resemble that of the team's new parent club, the Mets.[6]

In late July 2010, the Bisons and Mets agreed on a two-year extension that carried their agreement through the 2012 season.[7]

Wally Backman, manager of the Bisons in 2012

The 2010–2011 off-season saw changes to the Bisons coaching staff. Ken Oberkfell was replaced by Tim Teufel, who was a member of the 1986 Mets team. Teufel was introduced on Friday January 21, 2011, as the 16th manager in the Bisons' modern era.[8]

The Bisons' agreement with the Mets ended after the 2012 season due to Bisons' management being dissatisfied with their drop in attendance and poor performance during the Mets era. The Bisons enjoyed only one winning season out of the four years that they were affiliated with the Mets.[10] Consequently, the Bisons signed a player development contract with the Toronto Blue Jays on September 18, 2012.[11][12] The Blue Jays are geographically the closest MLB team to Buffalo and such a partnership would build on other international fan base efforts in the region, such as the now-defunct Bills Toronto Series in football.

As part of the rebuilding efforts, the Bisons announced a new uniform (a throwback uniform using a modernized variant of their 1980s logo and colors) and the return of former Bisons manager Marty Brown in November 2012.

The start of the 2020 season was postponed due to the COVID-19 pandemic before ultimately being cancelled on June 30.[17][18] Due to border restrictions stemming from the pandemic, the Blue Jays will play their 2020 season at Sahlen Field.[19]

Donald Palmer was an acrobatic batboy who performed for the Buffalo Bisons as "The Butcher" from 1979 to 1988.[22]

Earl Howze, Jr. was a beer vendor who performed for the Buffalo Bisons as "The Earl of Bud" from 1979 to 1997. He was known for dancing to the song "Tequila" atop the venue's dugouts, with a routine similar to the one made famous by Paul Reubens in the 1985 film Pee-wee's Big Adventure.[23] The Buffalo Bisons honored him at an August 2012 game, with every fan in attendance receiving a bobblehead of his likeness.[24]

Tom Girot is a beer vendor who has performed for the Buffalo Bisons as "Conehead" since 1979.[25] The Buffalo Bisons honored him at a July 2018 game, with a beer launched in his likeness called Conehead IPA by Resurgence Brewing Company.[26]

Buffalo Bisons games since 2011 have featured the Wing, Cheese & Carrot mascot race between costumed representations of various local foods just prior to the sixth-inning.[31]

"Stampede" has been the official fight song of the Buffalo Bisons since their inaugural season at Sahlen Field in 1988.

Tina Turner's cover of "The Best" from her 1989 album Foreign Affair is played after every Buffalo Bisons home victory at Sahlen Field.[32]

A parody of the Gary Glitter song "Rock and Roll Part 2" featuring lyrics referencing Irv Weinstein was played at Sahlen Field during the seventh-inning stretch of Buffalo Bisons games in the 1990s.[33] 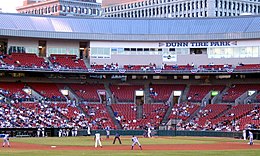 Sahlen Field with its press box overlooking the diamond

The Bisons Baseball Network broadcasts all Buffalo Bisons games. The flagship station is WWKB, a clear-channel station in Buffalo. Select games are broadcast on CJCL, the flagship station of the Toronto Blue Jays. Pat Malacaro serves as the team's play-by-play announcer, having taken over the position full-time in 2018[34] after serving as a fill-in in the years prior; he is teamed with color commentator Duke McGuire, who has been with the Bisons since 1979.[35] Until the 2016 season, a network of Western New York stations including WSPQ in Springville, WGGO in Salamanca and WOEN in Olean carried Bisons games, all of which have since ceased independent operations.

Jim Rosenhaus, a Bisons broadcaster for 11 years, is now a Cleveland Indians broadcaster. His predecessor Pete Weber, who was the Bisons play-by-play broadcaster for 13 years, currently serves in that role for the Nashville Predators. Stan Barron spent many years as the Bisons' broadcaster and was a major factor in preventing a proposed relocation in 1956 and returning the team to Buffalo in 1979.