Advertisement - You can get this game from STEAM
This article is about the province. For the capital of Argentina, see Buenos Aires. For the independent republic, see State of Buenos Aires.
Province of Argentina
Province in partido, Argentina 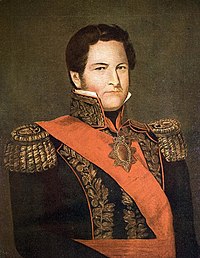 Governor Juan Manuel de Rosas (1841 oil portrait by Cayetano Descalzi) ruled until 1852 with an iron fist and kept the fragile Confederation under the tutelage of Buenos Aires Province.

The inhabitants of the province before the 16th-century advent of Spanish colonization were aboriginal peoples such as the Charrúas and the Querandíes. Their culture was lost over the next 350 years. They were subjected to Eurasian plagues from which few survived. The survivors joined other tribes or have been mostly absorbed by Argentina's European ethnic majority.

Amidst ongoing conflict with the aboriginals, the cattle farms extended from Buenos Aires, whose port was always the center of the economy of the territory. Following the creation of the Viceroyalty of the Río de la Plata at the end of the 18th century, the export of meat, leather and their derivatives through the port of Buenos Aires was the basis of the economic development of the region.

Jesuits unsuccessfully tried to peacefully assimilate the aboriginals into the European culture brought by the Spanish conquistadores. A certain balance was found at the end of the 18th century when the Salado River became the limit between both civilizations, despite frequent malones (aboriginal attacks on border settlements). The end to this situation came in 1879 with the Conquest of the Desert (Conquista del Desierto) in which the aboriginals were almost completely exterminated.

After the independence from Spain in 1816, the city and province of Buenos Aires became the focus of an intermittent Argentine Civil War with other provinces. A Federal Pact secured by Governor Juan Manuel de Rosas in 1831 led to the establishment of the Argentine Confederation and to his gaining the sum of public power, which provided a tenuous unity. Ongoing disputes regarding the influence of Buenos Aires, between Federalists and Unitarians, and over the Port of Buenos Aires (the prime source of public revenue at the time) fueled periodic hostilities. The province was declared independent on September 11, 1852, as the State of Buenos Aires. Concessions gained in 1859 Pact of San José de Flores and a victory at the Battle of Pavón led to its reincorporation into the Argentine Republic on December 17, 1861. Intermittent conflicts with the nation did not truly cease until 1880, when the city of Buenos Aires was formally federalized and, thus, administratively separated from the province.

Period illustration of the 1882 placement of La Plata's foundation stone.

La Plata was founded in 1882 by Governor Dardo Rocha for the purpose of becoming the provincial capital. The equivalent of a billion (1880s) dollars of British investment and pro-development, education and immigration policies pursued at the national level subsequently spurred dramatic economic growth. Driven by European immigration and improved health, the province's population, like Argentina's, nearly doubled to one million by 1895 and doubled again by 1914.[3] Rail lines connected nearly every town and hamlet in the province by 1914; many developed around the new railway stations.

This era of accelerated development was cut short by the Wall Street Crash of 1929, which caused a sharp drop in commodity prices (99% of Argentine exports were agricultural) and led to a halt in the flow of investment funds between nations. The new Concordance and Perón governments funded ambitious lending and public works programs, visible in Buenos Aires Province through the panoply of levees, power plants, water works, paved roads, municipal buildings, and (particularly during Perón's 1946-55 tenure) schools, clinics and massive regional hospitals.

The province's population, after 1930, began to grow disproportionately quickly in the suburban areas of Buenos Aires. These suburbs had grown to include 4 million out of the province's total 7 million people in 1960.[3] Much of the area these new suburbs were developed on (particularly the poorer ones) consisted of wetlands and were prone to flooding. To address this, Governor Oscar Alende initiated the province's most important flood-control project to date, the Roggero Reservoir. Completed a decade later, in 1971, the reservoir and associated electric and water-treatment facilities encouraged still more, and more orderly, development of the Greater Buenos Aires region, which today includes around 10 million people (​2⁄3 of the provincial population). It did not address worsening pollution resulting from the area's industrial growth, which had made itself evident since around 1920. This problem has been at its worst along the Reconquista River west and north of the city of Buenos Aires; over 4 million people (one in 10 Argentines) today live on the Reconquista's basin.[4] Of these, about a million still live with seriously compromised water quality, despite the province's (sometimes counterproductive) efforts to remedy the issue.[5]

In April 2013, the northeastern section of Buenos Aires Province, particularly its capital, La Plata, experienced several flash floods that claimed the lives of at least 59 people.

Alejandro Armendáriz, of the Radical Civic Union, was elected governor in 1983, when Raúl Alfonsín became president. Alfonsín lost the 1987 midterm elections, leading to the victory of Antonio Cafiero. From that year to 2015, all governors have been Peronists. The high population of the province makes it highly influential in Argentine politics. With both ruling for two terms, the rivalry of the president Carlos Menem and governor Eduardo Duhalde dominated the Argentine politics during the nineties. A similar case took place with the president Cristina Fernández de Kirchner and governor Daniel Scioli. María Eugenia Vidal, from Republican Proposal, won the 2015 elections, and became the first female governor of the province.[6] 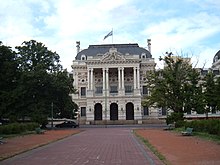 The provincial government is divided into three branches: the executive, headed by a popularly elected governor, who appoints the cabinet; the legislative; and the judiciary, headed by the Supreme Court.

The Constitution of Buenos Aires Province forms the formal law of the province.

In Argentina, the most important law enforcement organization is the Argentine Federal Police but the additional work is carried out by the Buenos Aires Provincial Police.

As part of The Pampas, the weather of the province is strongly influenced by the ocean, with hot summers and temperate winters. Humidity is high and precipitation is abundant and distributed over the year. The Western and Southwestern regions are drier.

Lake Gómez, near Junín in the north of the province 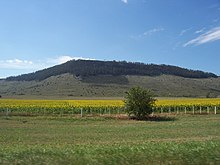 Rural area near Balcarce, in the south

The climate of the province of Buenos Aires is extremely benign for human activities: it is temperate, with four marked seasons and reliable rainfall on most regions. The province can be divided into four main climatic regions: the southwestern, drier region; the cool Atlantic region; the northern and eastern humid region, and the Delta region, with the warmest, wettest climate.

The Delta region is slightly warmer, especially at night, due to the presence of water and the northerly location. Summer nights tend to be stickier, and winters can be damp and foggy, with most nights between 4 and 8 °C (39 and 46 °F). Frost is still to be expected, but temperatures will almost never fall below −4 °C (25 °F), and snow has fallen only twice in the last century. Precipitation ranges from 1,000 to 1,300 mm (39 to 51 in) and falls throughout the year. The city of Buenos Aires is surrounded by a climate similar to the northern part of the province, but the city itself resembles more the Delta climate, with less frost.

The geography of the province is crossed by occasional west Pampero winds. The southern Sudestada produces storms and temperature drops, most notably the Santa Rosa storm,[7] which takes place every year almost exactly on August 30.

Unlike the other provinces of the country, in the province of Buenos Aires, the territorial divisions are called partidos instead of departments.

These also constitute the municipal division of the province. The provincial Constitution does not recognize the municipal autonomy that was recognized for the whole country in the reform of the National Constitution of 1994. Each partido corresponds to a municipality and is governed by a mayor elected by popular vote. The process of creating a partido is much more dynamic than in the other provinces, with a total of six more partidos in 2000 than in 1990. Most of the newer partidos were created in the Greater Buenos Aires. There are 135 partidos, the last established by law is Lezama (2009).

Buenos Aires Province is the most populated province of the country, with 15 million inhabitants (38% of the national population), of which 12 million live in Greater Buenos Aires and 3 million in the rest of the province. Around 33.8% of the inhabitants weren't born in the province, of whom 3,918,552 are immigrants from other provinces and 758,640 were born abroad.[8]

Most of its inhabitants are descendants from colonial-era settlers and immigrants from Europe who arrived within the 19th and 20th centuries, mostly Italians, Spaniards and to a lesser extent Germans, French and British. A number of suburbs in the province are also home to a large, predominantly mestizo population that began migrating from the country's northern provinces in the mid-20th century to take advantage of growing employment opportunities. These same communities are also home to considerable numbers of more recent migrants from Paraguay and Bolivia. 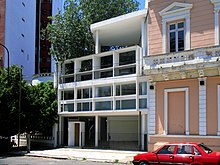 Tourists, mainly from Buenos Aires, visit the Atlantic coast. There are many cities and towns along the coastline, which starts some 250 kilometres (160 mi) from Buenos Aires after the Samborombón Bay. Among them, the biggest and most important is Mar del Plata, followed by the La Costa Partido, Pinamar, Villa Gesell, Miramar, and Necochea. The most important summer-related event, the National Sea Festival, is held annually in the city of Mar del Plata. The city's Central Casino and Grand Provincial Hotel are among the nation's largest.

In Buenos Aires Province, as throughout Argentina, football is the predominant sport. The province has numerous professional football teams, with most of them concentrated in the Greater Buenos Aires area. Club Atlético Independiente and Racing Club de Avellaneda are the most successful, famous and followed beyond the province borders. Other notable teams in Greater Buenos Aires include Arsenal, Quilmes, Banfield, Lanús, Chacarita Juniors, Tigre and Defensa y Justicia. In the capital of the province, Estudiantes and Gimnasia y Esgrima stand out.

The city of Mar del Plata hosted six matches of the 1978 FIFA World Cup and the 1995 Pan American Games, and annually holds the National Evita Games and the final stage of the Bonaerense Games, the last being the most important provincial sports event for young, the elderly and people with disabilities.[17]

Agriculture in the province is renowned around the world for its productivity. The province is Argentina's chief agricultural producer, and accounted for at least $8 billion in export earnings in 2014.[19] This sector adds about 5% to the province's highly diversified economy, however.[20] The province's ranching sector is diversified, and though cattle historically provided the main animal husbandry activity, Buenos Aires is also the top producer of sheep, pork, and chicken meat of the country. Equally important is the dairy industry. Crop harvests are the most diverse in the nation, and have grown to record levels in recent decades. The most important crops include soybean, maize, wheat, sunflower and other oilseeds, like flax. More recently, premium wines have been produced in the Buenos Aires wine region in the south of the province.

Manufacturing accounts for a fourth of the province's output and is about 40% of the entire nation's.[20] The industry of the province is diverse: chemical, pharmaceutical, metallurgic, motor vehicles, machinery, textiles and the food industry are the most notable. Excluding processed agricultural items, the province was responsible for over US$70 billion of industrial exports in 2016 and accounted for a third of all Argentine exports.[19][21]

The province's services sector is well-diversified and differs little from national trends. The largest local bank is the public Bank of the Province of Buenos Aires. The institution, the second-largest in Argentina, holds nearly a tenth of the nation's bank deposits.[22]