A budget is a financial plan for a defined period, often one year. It may also include planned sales volumes and revenues, resource quantities, costs and expenses, assets, liabilities and cash flows. Companies, governments, families and other organizations use it to express strategic plans of activities or events in measurable terms.[1]

A budget is the sum of money allocated for a particular purpose and the summary of intended expenditures along with proposals for how to meet them. It may include a budget surplus, providing money for use at a future time, or a deficit in which expenses exceed income. 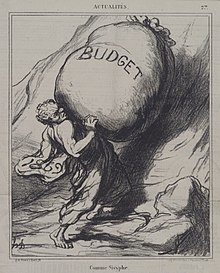 A budget (derived from the old French word meaning purse) is a quantified financial plan for a forthcoming accounting period.[2]

A budget is an important concept in microeconomics, which uses a budget line to illustrate the trade-offs between two or more goods. In other terms, a budget is an organizational plan stated in monetary terms.

In summary, the purpose of budgeting tools is to:

The budget of a company is often compiled annually, but may not be a finished budget, usually requiring considerable effort, is a plan for the short-term future, typically allows hundreds or even thousands of people in various departments (operations, human resources, IT, etc.) to list their expected revenues and expenses in the final budget.

If the actual figures delivered through the budget period come close to the budget, this suggests that the managers understand their business and have been successfully driving it in the intended direction. On the other hand, if the figures diverge wildly from the budget, this sends an 'out of control' signal, and the share price could suffer. Campaign planners incur two types of cost in any campaign: the first is the cost of human resource necessary to plan and execute the campaign. The second type of expense that campaign planners incur is the hard cost of the campaign itself.

The budget of a government is a summary or plan of the intended revenues and expenditures of that government. There are three types of government budget : the operating or current budget, the capital or investment budget, and the cash or cash flow budget.[3]

The federal budget is prepared by the Office of Management and Budget, and submitted to Congress for consideration. Invariably, Congress makes many and substantial changes. Nearly all American states are required to have balanced budgets, but the federal government is allowed to run deficits.[citation needed]

The budget is prepared by the Budget Division Department of Economic Affairs of the Ministry of Finance annually. The Finance Minister is the head of the budget making committee. The present Indian Finance minister is Nirmala Sitharaman. The Budget includes supplementary excess grants and when a proclamation by the President as to failure of Constitutional machinery is in operation in relation to a State or a Union Territory, preparation of the Budget of such State.[citation needed]

The first budget of India was submitted on 18 February 1860 by James Wilson. P C Mahalanobis is known as the father of Indian budget.

The Philippine budget is considered the most complicated in the world, incorporating multiple approaches in one single budget system: line-item (budget execution), performance (budget accountability), and zero-based budgeting. The Department of Budget and Management (DBM) prepares the National Expenditure Program and forwards it to the Committee on Appropriations of the House of Representatives to come up with a General Appropriations Bill (GAB). The GAB will go through budget deliberations and voting; the same process occurs when the GAB is transmitted to the Philippine Senate.

After both houses of Congress approves the GAB, the President signs the bill into a General Appropriations Act (GAA); also, the President may opt to veto the GAB and have it returned to the legislative branch or leave the bill unsigned for 30 days and lapse into law. There are two types of budget bill veto: the line-item veto and the veto of the whole budget.[citation needed]

A personal budget or home budget is a finance plan that allocates future personal income towards expenses, savings and debt repayment. Past spending and personal debt are considered when creating a personal budget. There are several methods and tools available for creating, using, and adjusting a personal budget. For example, jobs are an income source, while bills and rent payments are expenses. A third category (other than income and expenses) may be assets (such as property, investments, or other savings or value) representing a potential reserve for funds in case of budget shortfalls.

There are many informational sites and software available for use in personal and family problems.

A budget is a fundamental tool for an event director to predict with a reasonable accuracy whether the event will result in a profit, a loss, or will break-even.

There are two basic approaches or philosophies when it comes to budgeting. One approach is telling you on mathematical models, and the other on people.

The first school of thought believes that financial models if properly constructed, can be used to predict the future. The focus is on variables, inputs and outputs, drivers, and the like. Investments of time and money are devoted to perfecting these models, which are typically held in some type of financial spreadsheet application.

The other school of thought holds that it's not about models, it's about people. No matter how sophisticated models can get, the best information comes from the people in the business. The focus is therefore in engaging the managers in the business more fully in the budget process, and building accountability for the results. The companies that adhere to this approach have their managers develop their own budgets. While many companies would say that they do both, in reality, the investment of time and money falls squarely in one approach or the other.