The Brussels Agreement (Serbian: Бриселски споразум / Briselski sporazum, Albanian: Marrëveshja e Brukselit), formally the First Agreement of Principles Governing the Normalisation of Relations, was made between the governments of Serbia and Kosovo[a] on the normalization of their relations.[1] It was negotiated and concluded, although not signed by either party, in Brussels under the auspices of the European Union. The negotiations were led by Serbian Prime Minister Ivica Dačić and Kosovo Prime Minister Hashim Thaçi, and mediated by EU High Representative Catherine Ashton. The agreement was concluded on 19 April 2013.[2] The government of Serbia does not recognize Kosovo as a sovereign state, but began normalizing relations with the government of Kosovo nonetheless, in accordance with the Brussels Agreement. The term normalization of relations remains vague and thus largely problematic.[3]

Following the Kosovo War and NATO bombing of Yugoslavia in 1999, Kosovo, as part of Serbia and FR Yugoslavia, was placed under United Nations administration under UNSC Resolution 1244. In 2008, Kosovo declared independence and has since been recognized by 97 countries but Serbia maintains the position that Kosovo continues to be its territory.[4] It has become member of several international organizations, while according to Serbia and about half of the UN member states, Resolution 1244 remains legally binding to all parties. The EU-mediated dialogue between Kosovo and Serbia was launched in March 2011, three years after Kosovo declared independence.[5] Belgrade and Pristina are urged to continue talks in Brussels, but Serbia is not obliged to recognize Kosovo at any point in the process.[6]

So far ten rounds of talks were held at the European External Action Service office in Brussels. Baroness Ashton, the EU High Representative, had been chairing talks for two years, followed by Federica Mogherini. Normalization of relations with neighbouring states is a key precondition for states wishing to join the EU; the Brussels Agreement brought Serbia close to EU accession talks and Kosovo to initialling a Stabilisation and Association Agreement (SAA). The SAA was signed by HR Mogherini and PM Mustafa in October 2015. One of the most difficult problems still is removing the parallel Serbian structures in the Northern part of Kosovo until full sovereignty. 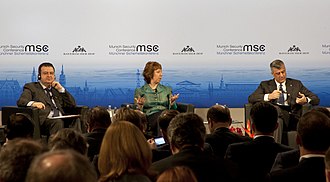 U.S. diplomats supported the EU-led dialogue from the beginning. Secretary of State Hillary Clinton invited Baroness Ashton to undertake joint travel in the Balkans, and the two made joint visits to Belgrade and Pristina (as well as Sarajevo) in October 2012. Clinton assigned Deputy Assistant Secretary of State ambassador Philip Reeker to support Ashton's efforts. Reeker and his team coordinated closely with EU colleagues, and met with Serbian and Kosovar representatives on the margins of every dialogue session in Brussels, and during visits to the region.

The result was a 15-point "First Agreement of Principles Governing the Normalisation of Relations", initialed but not signed on 19 April 2013.[7] 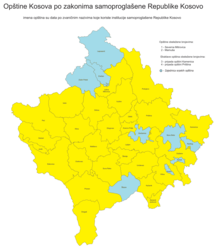 With just 2 pages, the agreement has 15 paragraphs. Paragraphs 1 to 6 concern the establishment, scope and functions of a proposed Community of Serb Municipalities. Paragraphs 7 to 9 concern police and security structures and include that there shall be one police force for all of Kosovo including its northern parts to be called "Kosovo Police". Paragraph 11 provides that municipal elections shall be held in all of Kosovo under Kosovo law. Paragraph 12 provides for the creation of an implementation plan and specifies a date (since lapsed) by which the plan would be concluded. Paragraph 13 contains an undertaking to intensify discussions on energy and telecoms. Paragraph 14 provides that "neither side will block, or encourage others to block, the other side's progress in their respective EU paths". Paragraph 15 envisages the establishment of an implementation committee with the facilitation of the EU.

Politically, the document is intended to agree the integration of the Serb-majority municipalities in Northern Kosovo into the Kosovo legal system, while providing certain guarantees. The guarantees are that: - all judicial matters are under the law of Kosovo, but Kosovo Serbs must be a majority of certain judicial panels, and a panel (Mitrovica District Court) must sit in Northern Mitrovica; -all policing is to be done by the Kosovo Police, but the Police Regional Commander for the Serb-majority areas must be a Kosovo Serb, chosen from a list provided by Kosovo Serb municipalities.[10][11]

After the Brussels Agreement, meetings are held regularly to bring about implementation of the provisions in different areas. In February 2015 a Justice agreement was concluded, followed by agreements on energy and telecom operators. On Aug. 25, 2015, an agreement was reached for the establishment of the Association of Serbian Comunitiers, the core of the Brussels Agreement. The statutes have yet to be drafted.

In October 2013, arrangements were made for Serbian officials to visit North Kosovo.[14] It was agreed that electoral bodies in Kosovo would include Kosovo Serb representatives[15] and that international dialing code +383 would be attributed to Kosovo.[16] The new code was expected to go into effect in late 2015 but has again been delayed by Serbia until March 2016.[17] The geographic phone code was implemented in December 2016.[18]

Some scholars, including Smilja Avramov and Elena Guskova, stated that the Brussels Agreement violates the Constitution of Serbia and the United Nations Charter and represents an indirect recognition of the independence of Kosovo.[19]

The Assembly of Kosovo has ratified the agreement, accepting it into a law, and treating it as an "international agreement".[20]

The National Assembly of Serbia has not treated the agreement as international, and has not ratified it into a binding law, which is a procedure required for international agreements in Serbia.[21] It has, however, merely accepted the government report about the "hitherto process of political and technical dialog with the temporary institutions in Pristina with the mediation of EU, including the process of implementation of the achieved agreements".[22] The constitutional court in Belgrade did not answer the question about constitutionality of the agreement, stating in December 2014[23] that the issue raised is a political question, and not a legal one.

Serbia has accepted, however, that progress in implementing the Brussels agreement is a prerequisite for EU accession talks within the opening of Chapter 35 negotiations in December 2015.[citation needed]