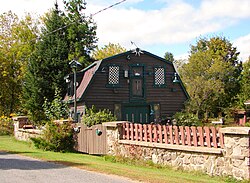 Brownsburg-Chatham is a municipality in the Laurentides region of Quebec, Canada, part of the Argenteuil Regional County Municipality. It is located along the Ottawa River, just west of Lachute, and includes the communities of Brownsburg, Cushing, Dalesville, Greece's Point, Pine Hill, and Saint-Philippe. Economic activities include agriculture, tourism and the manufacture of explosives.

It is the hometown of Gilles Lupien, retired defenceman of the Montreal Canadiens.

Chatham Township was established in 1799, and named after English Statesman William Pitt, 1st Earl of Chatham (1708–1778). Mostly populated by rich American Loyalists, its post office opened in 1829 and the township municipality was formed in 1845. By the mid-19th century, there were a few hamlets including Dalesville, Brownsbury, and Starneville.[1]

In 1818, Major George Brown, born in England, was granted by the government land on the West River (Rivière de l'Ouest). Together with pioneers Daniel Smith and Captain A. L. Howard, he was able to breathe life into the local industry during the 1820s. George Brown built, among other achievements, a sawmill and gristmill which contributed to the economic growth of the region and led to the formation of Brownsburg village which was named after him. In 1854, the Brownsburg Post Office opened. Later in the third quarter of the 19th century, a major arms factory run by the Dominion Cartridge Company was the major local industry.[1]

The city council meetings are available online since February 2, 2016.