Advertisement - You can get this game from STEAM
For the Italian national anthem, see Il Canto degli Italiani.
Italian political party

Brothers of Italy (Italian: Fratelli d'Italia, FdI) is a national-conservative[2][3][18] political party in Italy. Its leader is Giorgia Meloni, a member of the Chamber of Deputies and a former minister in Silvio Berlusconi's fourth cabinet.

The party, created from a split of The People of Freedom (PdL) in December 2012, is the main heir of the Italian neo-fascist conservative movement that had the Italian Social Movement (MSI, 1946–1995) and National Alliance (AN, 1995–2009) as its main political representatives. AN was merged into the PdL in 2009, but its bulk is now with the FdI. 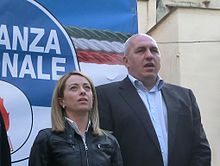 In November 2012, Ignazio La Russa and Maurizio Gasparri, leaders of the Protagonist Right, a faction within The People of Freedom (PdL), announced their support for Angelino Alfano in the party primary scheduled for December.[19] The subsequent cancellation of the primary was not agreed with by La Russa and many others in the party.

On 16 December, Giorgia Meloni and Fabio Rampelli, Guido Crosetto and Giuseppe Cossiga organised in Rome the so-called "Primaries of Ideas",[20] in which they openly criticised Silvio Berlusconi's leadership and any possible prospect of an electoral alliance with Prime Minister Mario Monti, proposed by some leading factions of the party (Liberamente, Network Italy, Reformism and Freedom, Liberal Populars, New Italy, FareItalia, etc.).[21][22]

On 17 December, La Russa, one of the three PdL national coordinators, announced he was leaving the party in order to form "National Centre-Right", including not just right-wingers, but also Christian democrats and liberals from Forza Italia (FI) like Crosetto and Cossiga.[23] The split from the PdL was agreed with Berlusconi in order to better represent the Italian right and offer an appealing choice to right-wing voters.[24] Simultaneously, Crosetto and Meloni announced the formation of "Brothers of Italy",[25] whose name was taken from the first line of the national anthem. On 21 December the two groups, formed mainly by former members of National Alliance (La Russa, Meloni, Rampelli, Massimo Corsaro, Viviana Beccalossi, Alfredo Mantica, etc.) joined forces as Brothers of Italy – National Centre-Right,[26] usually shortened to "Brothers of Italy" (FdI). La Russa's followers soon formed their own groups in most regional councils, starting with the Regional Council of Lombardy,[27] and the Senate.[28] Carlo Fidanza and Marco Scurria, MEPs in the European People's Party group, also joined the party.

In the 2013 general election the party obtained 2.0% of the vote and nine seats in the Chamber of Deputies.[29] On 5 March 2013 the party's executive board appointed La Russa president, Crosetto coordinator and Meloni leader in the Chamber.[30]

During 2013 presidential election's fourth ballot, the FdI decided to support Franco Marini, a Democrat supported also by the PdL and Lega Nord (LN). Following the unsuccessful outcome of the vote, the FdI started voting for colonel Sergio De Caprio,[31] known for having arrested Mafia boss Totò Riina. On 29 April 2013 Meloni announced in the Chamber of Deputies the party's vote of no confidence for Enrico Letta's government of Enrico Letta, supported by the Democrats, the PdL and Civic Choice.[32] The party would stay in opposition for the entire parliamentary term.

In September 2013, the FdI launched a "Workshop for Italy" (OpI), a political initiative aimed at broadening the party's base.[33] The newly-formed OpI's political committee, led by Cossiga, included, among others, former minister of Foreign Affairs Giulio Terzi di Sant'Agata, former members of AN (notably including Gianni Alemanno, Mario Landolfi, Sergio Berlato, Adolfo Urso and Souad Sbai), former members of FI (including former Socialists like Giulio Tremonti and Antonio Guidi, and former Christian Democrats like Fabio Garagnani), former members of the Union of the Centre (Magdi Allam and Luciano Ciocchetti), and a former member of the LN (Oreste Rossi).[34] Alemanno's Italy First and Urso's FareItalia were to join the FdI by February 2014.[35][36]

In December 2013, the "National Alliance Foundation", the association in charge of administering the assets of the defunct party, authorized the FdI, supported by Alemanno and Urso, to use the logo of AN in the 2014 European Parliament election,[37] despite opposition from an alternative front composed of The Right, Future and Freedom, Tricolour Flame, I the South, New Alliance, etc.[38] let alone the former members of AN who had joined FI like senators Maurizio Gasparri and Altero Matteoli.[39]

In February 2014, the party organised a "primary" in which members and supporters agreed to change the party's name to Brothers of Italy – National Alliance, chose the new symbol (including, in small, AN's one) and re-elected Meloni as president.[40] In March, during the party's first congress, the FdI ratified the primary's outcomes.[41]

In October 2015, during an assembly of the Foundation, the representatives of the FdI, supported by former AN heavyweights who had remained in the PdL, won a decisive vote over a front led by Alemanno, who had left the FdI earlier, joined forces with former allies of Gianfranco Fini and wanted to form a larger party (including the FdI). The FdI thus retained the use of AN's name and symbol, while Alemanno announced that he would create a "Movement for the United Right".[43][44]

Road to the 2018 general election 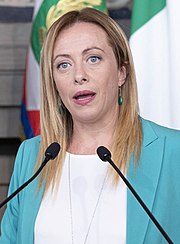 Meloni at the Quirinal Palace.

In November 2015, it was announced that the party would undergo a new process of enlargement and that a new political committee, named Our Land (TN), would be launched by January 2016. TN would comprise the FdI, along with other right-wing politicians, notably including Cossiga (former deputy of FI and founding member of the FdI), Alberto Giorgetti (a deputy of FI, who was long a member of AN) and Walter Rizzetto (deputy of Free Alternative, originally elected with the Five Star Movement).[45][46][47] In March 2016 Rizzetto officially joined the FdI and, contextually, it was announced that the party's group in the Chamber would be renamed "Brothers of Italy–Our Land".[48][49][50] The name change never happened, but the party's enlargement continued with the switch of two deputies from FI.[51]

In the 2016 municipal election in Rome, Meloni ran for mayor with the support of Us with Salvini, but in competition with the candidate supported by FI: Meloni won 20.6% of the vote, almost twice than FI's candidate, but did not qualify for the run-off, while the FdI obtained 12.3%.[52] In the Sicilian regional election Nello Musumeci, a conservative close to the party, was elected President of Sicily.

In December 2017, during the party's second congress, Meloni was re-elected president, the party was renamed simply Brothers of Italy and a new symbol was unveiled. In the event, the FdI welcomed several newcomers, notably including Daniela Santanchè and Bruno Mancuso, respectively from FI and Popular Alternative (AP).[53][54][55][56] Mancuso became the party's third senator, after Stefano Bertacco[57] and Bartolomeo Amidei[58] had switched from FI in the previous months. Additionally, Crosetto and Urso returned to an active role in the party.[59] Finally, Alessandro Urzì took his Alto Adige in the Heart party into the FdI.[60]

In February 2019, Marco Marsilio won 48.0% of the vote in the Abruzzo regional election and became FdI's first president of region.[65]

For the EP election the FdI recruited several high-profile candidates, including five outgoing MEPs (two of Direction Italy, plus three more recent splinters from FI: Fabrizio Bertot, Stefano Maullu and Elisabetta Gardini), other former FI heavyweights (Alfredo Antoniozzi and Monica Stefania Baldi) and renowned sociologist Francesco Alberoni.[66] As a result, the FdI obtained 6.4% of the vote (10.3% in Calabria, 9.0% in Lazio, 8.9% in Apulia and 8.4% in Basilicata) and five MEPs.

The FdI traces its roots in the history and values of the Italian Social Movement and its successor National Alliance.[67][68] The party's main ideological trends are Italian nationalism and conservatism,[2] and its ideology includes also a Eurosceptic sentiment.[69]

The FdI has included several internal factions, notably including:

Alemanno and Poli Bortone left the FdI, along with their factions, in December 2014 and April 2015, respectively.

The electoral results of the FdI in general (Chamber of Deputies) and European Parliament elections since 2013 are shown in the chart below.