Brooklyn College, part of the City University of New York, is a public college in Brooklyn, New York, with about 15,000 undergraduate and 2,800 graduate students on a 35-acre campus. New York City's first public coeducational liberal arts college, it has been nicknamed, more recently, "the poor man's Harvard."[4]

In 1930, the college formed by the merger of the Brooklyn branches of Hunter College, then a women's college, and of the City College of New York, then a men's college, both established in 1926. Initially tuition-free, Brooklyn College suffered in New York City government's near bankruptcy in 1975, when the college closed its campus in downtown Brooklyn.

During 1976, with its Midwood campus intact and newly its only campus, Brooklyn College charged tuition for the first time. The college maintained its high national ranking in numbers of doctoral alumni. Prominent alumni include US Senators, federal judges, US financial chairpersons, Olympians, CEOs, and recipients of Academy Awards, Emmy Awards, and Pulitzer Prizes. 52.5% of students graduate within six years.[5]

Brooklyn College was founded in 1930.[6] That year, as directed by the New York City Board of Higher Education on April 22, the college authorized the combination of the Downtown Brooklyn branches of Hunter College, at that time a women's college, and the City College of New York, then a men's college, both established in 1926.[7][8] Meanwhile, Brooklyn College became the first public coeducational liberal arts college in New York City.[9] The school opened in September 1930, holding separate classes for men and women until their junior years.[7][10] Admission would require passing a stringent entrance exam.[11] 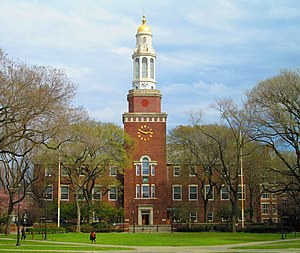 In 1932, architect Randolph Evans drafted a plan for the campus on a substantial plot that his employer owned in Brooklyn's Midwood section. Evans sketched a Georgian campus facing a central quadrangle, and anchored by a library building with a tower. Evans presented the sketches to the college's then president, Dr. William A. Boylan, who approved the layout.

The land was bought for $1.6 million ($30,000,000 today), and construction allotment was $5 million ($94,000,000 today).[11] Construction began in 1935. At the groundbreaking ceremony was Mayor Fiorello La Guardia and Brooklyn Borough President Raymond Ingersoll.[11] In 1936, United States President Franklin D. Roosevelt visited and laid the gymnasium's cornerstone.[11] Boylan, Ingersoll, and Roosevelt each became namesake of a campus building.

During the tenure of its second president, Harry Gideonse, from 1939 to 1966, Brooklyn College ranked high nationally in number of alumni with doctorate degrees.[12][13] As academics fled Nazi Germany, nearly a third of refugee historians who were female would at some point work at Brooklyn College.[9] And in 1956, with John Hope Franklin joining, it became the first "white" college to hire on a permanent basis a historian who was black.[9]

In 1959, still tuition-free, about 8,000 undergraduates were enrolled.[14] In 1962, the college joined six other colleges to form the City University of New York, creating the world's second-largest university.[15] In 1983, Brooklyn College named its library the Harry D. Gideonse Library.[12][16] The college's third president, Francis Kilcoyne, served from 1966 to 1967.[17] The fourth president, Harold Syrett, resigned via illness in 1969.[18]

John Kneller, Brooklyn College's fifth president, served from 1969 until 1979.[19][20][21] In 1970, students on campus seized his office during a student strike upon the Kent State shootings and the Cambodian Campaign.[20][22][23] President Kneller terminated classes, but kept campus buildings open for students and faculty.[20] On the other hand, in 1974, a member of the fencing team, dashing across the Quad, introduced streaking to campus.[20]

In 1975, amid New York City's financial crisis, near bankruptcy, Brooklyn College's campus in downtown Brooklyn closed, leaving the Midwood campus as the Brookyn College's only campus. The following year, with some 30,000 undergraduates enrolled, the college charged tuition for the first time.[14]

Brooklyn College's sixth president was Robert Hess, who served from 1979 to 1992.[24][25][26][27] In a 1988 survey of thousands of American college deans, Brooklyn College ranked 5th in providing students with a strong general education, and was the only public institution among the top five.[25][26] As of 1989, Brooklyn College ranked 11th in the US, and ahead of six of the eight Ivy League universities, by number of graduates who had acquired doctoral degrees.[28] At Brooklyn College being called “the poor man’s Harvard,” President Hess quipped, “I like to think of Harvard as the rich man’s Brooklyn College.”[29]

Brooklyn College's campus leafy East Quad looks much like it did when it was originally constructed.[6] The campus also serves as home to BCBC/ Brooklyn College Presents complex and its four theaters, including the George Gershwin.

The demolition of Gershwin Hall, replaced by The Leonard & Claire Tow Center for the Performing Arts for which ground was broken in 2011, is the most recent construction on an evolving campus.[11][31] Alumni Leonard and Claire Tow gifted $10 million to the college.[6] Other changes to the original design include the demolition of Plaza Building, due to its inefficient use of space, poor ventilation, and significant maintenance costs. To replace the Plaza Building, the college constructed West Quad Center, designed by the notable Uruguayan architect Rafael Viñoly. The new building contains classroom space, offices, gymnasiums and a swimming pool. It houses the offices of Registration, Admissions, Financial Aid, and the Department of Physical Education and Exercise Science. The grounds contain a quadrangle with grassy areas and trees. New façades are being constructed on Roosevelt and James halls where they once connected with Plaza Building. The 2009–10 CUNYAC championship men's basketball team now plays its home games in the West Quad Center.

This followed a major $70 million library renovation completed in 2003 that saw the library moved to a temporary home while construction took place.[6] The Brooklyn College library is now located in its original location in a completely renovated and expanded LaGuardia Hall.

From 2000 to 2009 when he retired, Christoph M. Kimmich was the eighth President of Brooklyn College.[32] In the 2003 edition of The Best 345 Colleges, the Princeton Review named Brooklyn College as the most beautiful campus in the country, and ranked it fifth in the nation for “Best Academic Bang for the Buck.”[15][33]

The campus has been shown on numerous movies and television shows, including The Squid and the Whale (2005; received an Academy Award nomination for Best Original Screenplay), The First Wives Club (1996), and The Education of Max Bickford (2001–2002).[36]

View from the West Quad looking onto the East Quad (from left to right, James Hall, Boylan Hall, the library, Ingersoll Hall, and Roosevelt Hall) 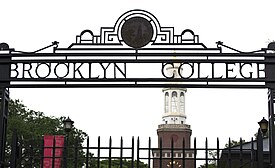 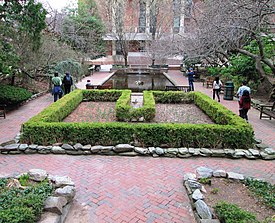 Beginning in 1981, the college instituted a group of classes that all undergraduates were required to take, called "Core Studies".[11] The classes were: Classical Origins of Western Culture, Introduction to Art, Introduction to Music, People, Power, and Politics, The Shaping of the Modern World, Introduction to Mathematical Reasoning and Computer Programming, Landmarks of Literature, Chemistry, Physics, Biology, Geology, Studies in African, Asian, and Latin American Cultures, and Knowledge, Existence and Values.[37]

In 2006, the Core Curriculum was revamped, and the 13 required courses were replaced with 15 courses in 3 disciplines, from which students were required to take 11.[38] In the fall of 2013, Brooklyn College embarked on CUNY's new general education alternative, the Pathways curriculum, consisting of three components: Required Core (four courses), Flexible Core (six courses) and College Option (four courses)—totaling 42 credits.[39] Brooklyn College offers over a hundred majors varying from the visual arts to Women's Studies.[40]

The Division of Graduate Studies at Brooklyn College was established in 1935 and offers more than seventy programs in the arts, education, humanities, sciences, and computer and social sciences. Among those programs is the Graduate theatre program, which is the top ranked in the CUNY system and 14th in the United States; faculty include Tony Award nominee Justin Townsend.[41][42]

The Brooklyn College B.A.–M.D. program is an 8-year program affiliated with SUNY Downstate Medical Center. The Program follows a rigorous selection process, with a maximum of 15 students selected every year. Each student selected to the program receives a Brooklyn College Presidential Scholarship. B.A.–M.D. students must engage in community service for three years, beginning in their lower sophomore semester. During one summer of their undergraduate studies, students are required to volunteer in a clinical setting where they are involved in direct patient care. B.A.–M.D. students are encouraged to major in the humanities or social sciences. A student who majors in a science must choose a minor in the humanities or social sciences. All students meet the pre-med science requirements by taking cell and molecular biology, physiology, general chemistry, organic chemistry, and general physics. B.A.–M.D. students must maintain at Brooklyn College an overall grade point average of 3.5, and a pre-med science GPA of 3.5.[44]

The Scholars Program is home to a small number of students with strong writing ability and academic record. Being the oldest honors program in the CUNY system, The Scholars Program has served as a model for many other honors programs nationwide. It was established in 1960 and is an interdisciplinary liberal arts program. The program offers honors-level Core courses and seminars as well as small, personalized classes. Upon graduation from Brooklyn College, many Scholars continue their education in competitive programs at top-ranked universities like Princeton, Yale, and New York University. The program accepts incoming freshmen in addition to matriculated sophomores and transfer students (up to 48 credits). Once admitted, they receive a Brooklyn College Foundation Presidential Scholarship of up to $4,000 for every year of their undergraduate study at Brooklyn College and a laptop computer. [45]

The Coordinated Honors Engineering Program offers a course of study equivalent to the first two years at any engineering school. Students who maintain the required academic level are guaranteed transfer to one of the three coordinating schools—NYU-Poly, City College of New York School of Engineering, and the College of Staten Island Engineering Science Program—to complete their bachelor's degree in engineering. Coordinating Engineering students have also transferred to Stony Brook University, University of Wisconsin, University of Michigan, Cooper Union, and the Massachusetts Institute of Technology. Students admitted as incoming First-Year receive a Brooklyn College Foundation Presidential Scholarship that provides full tuition for their two years of full-time undergraduate study in the Coordinated Engineering Program. As members of the Honors Academy, Engineering Honors students take advantage of individual advising, faculty consultation, and early registration. In the Commons they find study facilities, computer access, academic, scholarship, internship, and career opportunities, and, above all, intellectual stimulation among other talented students like themselves. Students applying to the Engineering Honors Program will also be considered for the Scholars Program.[46]

Barry R. Feirstein Graduate School of Cinema is the first public graduate film school in New York City. It is the only film school in America to have its own classroom on a film lot with the collaboration of Steiner Studios, the largest soundstage on the East Coast. The program offers a two-year M.A. in Cinema Studies, a two-year M.F.A. in Cinema Arts in the discipline of Producing, and a three-year M.F.A in Cinema Arts with five disciplines of Cinematography, Directing, Post-production, Screenwriting, and Digital Arts and Visual Effects. The school opened in the fall of 2015. The first graduating class was in Spring 2018.

U.S. News & World Report ranked the school tied for 59th overall as a Regional college (North region), tied for 3rd in Top Performers on Social Mobility, 14th for Top Public Schools, tied for 17th in Best Undergraduate Teaching, and tied for 33rd in Best Colleges for Veterans for 2020.[51]

In 2010, Brooklyn College adopted the Bulldog as its new mascot.[52] The athletic program was originally known as the Kingsmen. In 1994, the mascot was changed to the Bridges. However, after the school built new facilities and underwent other changes the athletic director pushed for a new name to reflect the new program.[53] 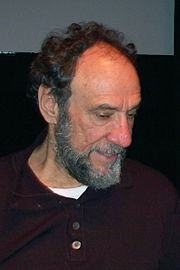 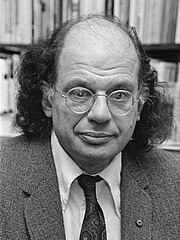 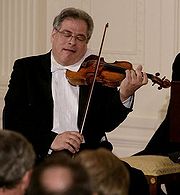 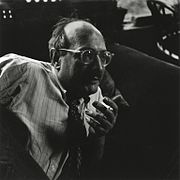 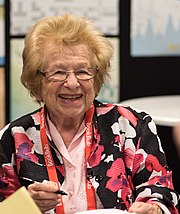 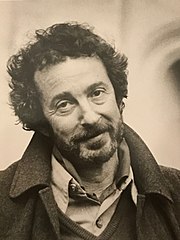