Bromont is a city in southwestern Quebec, Canada, at the base of Mont Brome; it is in the Brome-Missisquoi Regional County Municipality. The Bromont area and its resort, Ski Bromont, is well known as a tourist destination for its downhill skiing, mountain biking, BMX-riding and water slides. It also features golf and equestrian events in moderate weather. Bromont also boasts a high-tech industrial park, which includes IBM,[5] General Electric, and Teledyne DALSA. Bromont (Roland Désourdy) Airport serves the region.

In the southern portion of the city lies Lac Bromont, the largest lake within the city limits, and the smaller Lac Gale, near which is built BALNEA Spa, the largest bathhouse resort in Quebec.

On June 9, 2014, the International Federation for Equestrian Sports (FEI) chose Bromont as the site of the 2018 FEI World Equestrian Games.[6] The main venue for the games was supposed to be the Bromont Olympic Equestrian Park.[7][8] On July 22, 2016, Bromont was forced to withdraw from hosting the event because of financial problems.[9]

Located between Montreal and Sherbrooke in proximity of Granby, the territory known as Bromont is characterized by a mountain with several summits, called Mont Brome (or Bromont), Mount Gale, and a smaller top, almost a hill, mount Soleil (literally mount Sun). By contrast, the terrain around this mountainous mass is flat and has hills and vales sparsely distributed. This is crossed by the Yamaska river, flowing in from Fulford from its source lake Brome, separated from Bromont by Iron Hill and Fulford (both parts of Lac-Brome), and definitely leaving into Saint-Alphonse-de-Granby. Two lakes: Bromont and Gale, are pooling between the mountaintops of Mont Brome; Gale Lake, on Mount Gale, is fed by waters of the mountain. The surface of the territory is naturally covered by mixed forest and grasslands, sometimes exploited as grazing grounds or as growing space.

Another portion is exploited for human ends. Much of Bromont's surface is crisscrossed by roads andtrails, including a section of Quebec Autoroute 10 (which connects Montreal and Sherbrooke), with access to Bromont at two exits (74 and 78). This network has many touristic crossroads, a historic village, many neighbourhoods occupied by housing and shops, as well as a technology industrial park. Many spaces that aren't covered by woodland are cultivated, others serve to sustain large herbivorous domestic animals: cows, horses, and alpacas.

A natural domain established on Mount Gale includes a protected area, uniting privately owned lands for conservation and hiking. In spite of these conservation efforts, a large part of Mount Brome is exploited intensively. Bromont, mountain of experiences is a mega-tourist complex, including alpine skiing facilities, a water park, holiday housing, and residences.

Bromont was envisioned by Roland Désourdy (1917–2011). In 1963 he became the first French Canadian Master of the Montreal Hunt.

In 1966, Bromont annexed the town of West Shefford, Quebec, which had been founded in 1792 and was a stop on the stagecoach route between Montreal and Sherbrooke, Quebec.[16]

The plant was designed to manufacture approximately 2,000 Hyundai Sonatas per week.[17] Subsequently, Chrysler and Hyundai considered a joint venture that would have Chrysler rebranding the Sonata manufactured at Bromont, but later said the deal had failed.[18] The Bromont plant was operational for four years before it closed in 1994, with Hyundai's sales unable to support the plant.[19] Hyundai subsequently sold the plant to Olymbec Inc.[19] It subdivided the plant, leasing the former paint and assembly plant to Goodyear from February 2007. The former metal stamping portion of the plant was leased to AAER Inc., a manufacturer of wind turbines based in Quebec. 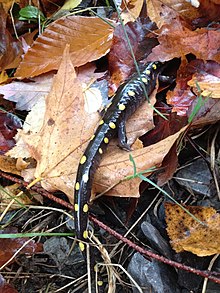 A spotted salamander on Mont Gale

The environment present within Bromont limits allowed special ecosystems to develop; indeed, mountainous terrain, the presence of water in the form of lakes, creeks, and the river, the blend of trees and the expanse of prairies permit various flora and fauna to flourish there. On Mount Gale, it is possible to observe species of amphibians that only thrive at higher elevations; the lakes harbour many species of fish, amphibians, water birds, turtles, and aquatic mammals such as muskrat. Humans having encroached in the area have kept many species of domestic animals that populate the fields and roam wild just the same, house cats, dogs, and horses are among the most common in the municipality. Fields and forests serve as breeding grounds for many species of birds, some of which remain all year, though a large portion migrates south during the colder months; Canada geese, European starling, American crows and black-capped chickadees to name a few. Many animals coveted by hunters and trappers also inhabit the land, red fox, white-tailed deer, wild turkey; raccoon and deer are often victim of roadkill. Covering most of the territory, vegetation of many kinds thrives; a majority of Bromont is forest covered, though plants occur in grasslands and urban developments alike. Biodiversity is a pride and Bromont aims to respect it.[20]