Advertisement - You can get this game from STEAM
This article is about the town in Quebec. For the fresh water lake, see Brome Lake.
Town in Quebec, Canada

The Town of Brome Lake (officially Lac-Brome[2]) is a town in southern Quebec, Canada. It is located in the Brome-Missisquoi Regional County Municipality of the Montérégie administrative region. The population as of the Canada 2011 Census was 5,609.

Historically, the town was situated in Brome County in Quebec's Eastern Townships. Seven villages surrounding the lake by the same name, Brome Lake — Bondville, East Hill, Foster, Fulford, Knowlton, Iron Hill and West Brome — were amalgamated in 1971 to create the Town of Brome Lake. Tourism is also a major industry in the village of Knowlton because of skiing in the winter, lake activities in summer, and fall colours which peak in early October.

Knowlton is sometimes nicknamed The Knamptons[5] (a portemanteau of Knowlton and the Hamptons) because of its many affluent seasonal residents from Montreal,[6] who own multimillion-dollar country houses in the area.[5] Sotheby's International Realty has a branch office located in Knowlton because of its upscale market.

The Old Court House and Registry Office of Brome County.

The village was founded in 1802 by United Empire Loyalists from the New England states and New York. Originally known as Coldbrook for the stream that runs through the centre of the village, in 1855 the village had become the county seat of Brome County, Quebec. Much more on the history can be found at the Brome County Historical Society which was incorporated on March 9, 1898. The museum is still in operation today.

Brome Lake was also the only place in Canada where a large portion of the Canadian Royal Family was gathered. In July 1976, Queen Elizabeth II, Prince Philip, Duke of Edinburgh, Charles, Prince of Wales, Princess Anne, Prince Andrew, Prince Edward, and Mark Phillips were in attendance. The Royal Family was housed on the grounds of Alva House, a private residence on the shores of Brome Lake. The location was ideally suited to allow them easy access to the 1976 Olympic Games Equestrian Park, located in nearby Bromont Quebec, where Princess Anne was competing in equestrian events.[7] 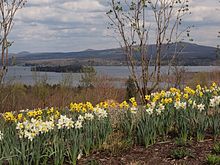 Metamorphic rock of Cambrian age—mostly schist and phyllite—underlies the area. Quaternary glaciation left deposits of stony loam till plus outwash sands and gravels. Brown podzolic and podzol soils are most common. Gleysols and peats occur in poorly drained areas.

The area's most significant soil is the Blandford series. This well-drained loam developed under deciduous forest. Settlers exploited this forest for wood, potash, and maple sugar. Cleared areas were found to be productive for crops and pasture. Much former farmland has reverted to forest and today provides a supply of hardwood lumber.

In 1968, Paramount Studios chose Knowlton as the location to film the children's movie My Side of the Mountain (film), an adaptation of a book by Jean Craighead George.[1] Many scenes from the village were used as well as a man-made pond at the corner of Chemin Paramount and Chemin Paige near Mount Glen.

In 1975, Knowlton was also used as one of the sites for filming the Jodie Foster suspense film The Little Girl Who Lives Down the Lane.[12]