Oxford shoe Clog Derby shoe
This article is about the shoe. For the accent, see Brogue.

The brogue (derived from the Gaelic bróg (Irish), bròg (Scottish) "shoe")[1][2] is a style of low-heeled shoe or boot traditionally characterised by multiple-piece, sturdy leather uppers with decorative perforations (or "broguing") and serration along the pieces' visible edges.[3]

Brogues were traditionally considered to be outdoor or country footwear not otherwise appropriate for casual or business occasions, but brogues are now considered appropriate in most contexts.[4] Brogues are most commonly found in one of four toe cap styles (full or "wingtip", semi-, quarter and longwing) and four closure styles (Oxford, Derby, ghillie, and monk). Today, in addition to their typical form of sturdy leather shoes or boots, brogues may also take the form of business dress shoes, sneakers, high-heeled women's shoes, or any other shoe form that utilises or evokes the multi-piece construction and perforated, serrated piece edges characteristic of brogues.

Modern brogues trace their roots to a rudimentary shoe originating in Ireland and Scotland that was constructed using untanned hide.[5] Modern brogues feature decorative perforations. These are often said to stem from the original Irish brogues as well, specifically from holes intended to allow water to drain from the shoes when the wearer crossed wet terrain such as a bog. However, contemporary descriptions of the original brogues do not mention such holes.[5] The word "brogue" came into English in the late sixteenth century. It comes from the Gaelic bróg (Irish), bròg (Scottish) "shoe", from the Old Norse "brók" meaning "leg covering".[1][2] The Scots word brogue[6] is also used to denote a bradawl or boring tool as well as the action of piercing with such a tool.[7]

The word "brogue" was first used to describe a form of outdoor, country walking shoe in the early twentieth century traditionally worn by men.[1] At that time the brogue was not considered to be appropriate for other occasions, social or business. Over time perceptions have changed and brogues are now considered appropriate in most contexts, including business.[4] Brogues continue to be most common as leather dress and casual shoes and boots, but can also be found in many other forms including canvas and leather sneakers and high-heeled women's shoes.

Brogues are most commonly found in one of four toe-cap styles (full or "wingtip" brogues, semi-brogues, quarter brogues and longwing brogues) and four closure styles (Oxford, Derby, ghillie and monk strap). Most commonly offered as a leather dress shoe, brogues may also come in the form of boots, canvas or leather sneakers or any other shoe type that includes or evokes the multi-piece construction and perforated, serrated edges characteristic of brogues.

Brogue styles are determined by the shape of the toe cap and include the commonly available full brogue (or "wingtip" in the United States), semi-brogue and quarter brogue styles, and may also be found in the less common longwing brogue style. 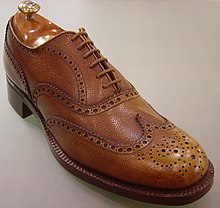 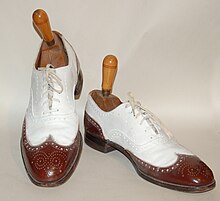 Full brogues (also known as wingtips) are characterised by a pointed toe cap with extensions (wings) that run along both sides of the toe, terminating near the ball of the foot. Viewed from the top, this toe cap style is "W" shaped and looks similar to a bird with extended wings, explaining the style name "wingtips" that is commonly used in the United States. The toe cap of a full brogue is both perforated and serrated along its edges and includes additional decorative perforations in the center of the toe cap. A shoe with a wingtip-style toecap but no perforations is known as an "austerity brogue", while a plain-toe shoe with wingtip-style perforations is a "blind brogue".

Spectator shoes (British English: Co-respondent shoes) are full brogue Oxfords constructed from two contrasting colours, typically having the toe and heel cap and sometimes the lace panels in a darker color than the main body of the shoe.[3][8] Common color combinations include a white shoe body with either black or tan caps, but other colours can be used. 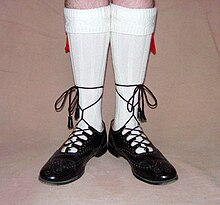 The ghillie style of full brogue has no tongue, to facilitate drying, and long laces that wrap around the leg above the ankle and tie below the calf to facilitate keeping the tie clear of mud. Despite the functional aspects of their design, ghillie brogues are most commonly seen as a component of traditional, formal Scottish dress and are worn primarily for social occasions.

Semi-brogues (also known as half brogues) are characterised by a toe cap with decorative perforations and serration along the cap's edge and includes additional decorative perforations in the center of the toe cap. The half brogue was first designed and produced by John Lobb Ltd. as an Oxford in 1937 in an effort to offer his customers a shoe more stylish than a plain oxford, yet not as bold as a full brogue. 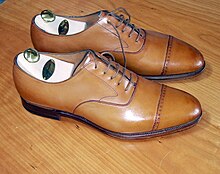 Longwing brogues (also known in the US as "English" brogues, and in the UK as "American" brogues)[citation needed] are Derby style shoes characterised by a pointed toe cap with wings that extend the full length of the shoe, meeting at a center seam at the heel. Longwing Derby brogues were most popular in the US during the 1970s, and although the popularity of this style has decreased, it remains available.

Closure style is not a defining characteristic of the brogue and therefore brogues can be found in a variety of closure styles. Brogues are commonly available in laced Oxford, Derby or ghillie styles, but can also be found as buckle and monk strap shoes and slip-on shoes with or without elastic closures.