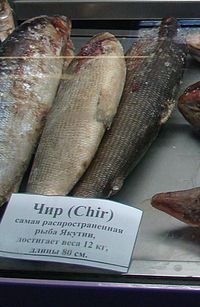 The broad whitefish (Coregonus nasus) is a freshwater whitefish species. Dark silvery in colour, and like a herring in its shape, its distinctive features include a convex head, short gill rakers, and a mild overbite. It is found in the Arctic-draining streams, lakes, and rivers of far eastern Russia and North America. Its prey includes larval insects, snails, and shellfish. It is eaten by humans and brown bears.

The broad whitefish is a herring-shaped fish with a more compressed body and convex head than other whitefishes. It is iridescent, with a dark olive-brown back, silvery grey sides, and a whitish bottom.[2][3] Features that distinguish it from other species include a mild overbite and 18–25 short gill rakers.[2][3] The fins of adults are grey, while those of young fish are grey.[4] It reaches a maximum length of 70 centimetres (28 in), and a maximum weight of 16 kilograms (35 lb).[2]

The broad whitefish is found in Arctic-draining basins in northern Eurasia and North America from the Pechora River to the Perry River. Most commonly inhabiting streams,[3] it is also found in lakes and estuaries with a salinity of less than 15 percent.[1] Fish from freshwater populations sometimes migrate to or through ocean waters, especially in the winter.[4] It is nerito-pelagic, meaning that it is found in inshore open water.[2] Throughout its range it is widespread and abundant, and there are no known threats to its survival,[1][3] though it could potentially be threatened by overfishing, habitat destruction caused by oil exploration, and alteration of rivers.[4] It has a number of genetically distinct forms in the various basins it occurs in.[5] It has been stocked successfully in Belgium and unsuccessfully in Latvia, Ukraine, Estonia, China.[2] An introduction has been made in Mining, Austria, where a rod and reel record fish was caught in 2002.[6]

Recorded items in the broad whitefish's diet are chironomid midges, mosquito larvae, snails, bivalves, and crustaceans.[4] It migrates upstream to spawn, except in some estuaries. These migrations are difficult for it, and many individuals become heavily scarred from infestations, lampreys, and fishing nets.[7] It prefers streams with gravel bottoms, especially those with finer gravel, for spawning. After hatching, larval fish move downstream.[4] In Russia, spawning occurs between July and November in various populations.[2]

This fish is commonly consumed by humans, especially on a subsistence basis, and its good-tasting flesh is sold fresh, smoked, or dried.[2][4] Also known as Chir, the broad whitefish is one of the species used in the Arctic Siberian dish stroganina.[8]

It is also eaten by brown bears, especially when their preferred salmon is not available.[9]