BSI Group, also known as the British Standards Institution, is the national standards body of the United Kingdom. BSI produces technical standards on a wide range of products and services and also supplies certification and standards-related services to businesses.

BSI Group was founded as the Engineering Standards Committee in London in 1901.[5][2] It subsequently extended its standardization work and became the British Engineering Standards Association in 1918, adopting the name British Standards Institution in 1931 after receiving a Royal Charter in 1929.[2] In 1998 a revision of the Charter enabled the organization to diversify and acquire other businesses, and the trading name was changed to BSI Group.

The Group now operates in 193 countries.[4] The core business remains standards and standards related services, although the majority of the Group's revenue comes from management systems assessment and certification work.[6]

Meeting of the international standards committee for the C++ programming language, hosted at the British Standards Institution in 1997

In response to commercial demands, BSI also produces commissioned standards products such as Publicly Available Specifications, (PASs), Private Standards and Business Information Publications. These products are commissioned by individual organizations and trade associations to meet their needs for standardized specifications, guidelines, codes of practice etc. Because they are not subject to the same consultation and consensus requirements as formal standards, the lead time is shorter.

It is independently accredited[8] and assesses a wide range of standards and other specifications including: 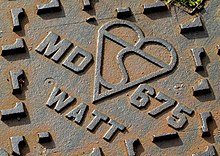 Kitemark symbol as seen on an access cover in Newtownards, Northern Ireland

Within Testing Services, BSI's best known product in the UK is the Kitemark, a registered certification mark first used in 1903.[2][5] The Kitemark – which is recognized by 82% of UK adults[9] – signifies products or services which have been assessed and tested as meeting the requirements of the related specification or standard within a Kitemark scheme.

BSI also conducts testing of products for a range of certifications, including for CE marking. CE marking must be applied to a wide range of products intended for sale in the European Economic Area. Frequently manufacturers or importers need a third-party certification of their product from an accredited or 'Notified' body. BSI holds Notified Body status for 15 EU Directives,[10] including construction products, marine equipment, pressurised equipment and personal protective equipment.

BSI also conducts testing for manufacturers developing new products and has facilities to test across a wide range of sectors, including construction, fire safety, electrical and electronic and engineering products.

Within Healthcare, BSI provides regulatory and quality management reviews and product certification for medical device manufacturers in Europe, the United States, Australia, Japan, Taiwan, Canada and China.[11] It is the market leader in the US, the world's biggest healthcare market.[12]

Starting in 1998, BSI Group has adopted a policy of international growth through acquisition as follows:[18]