British North America comprised the British Empire's colonial territories in North America from 1783 to 1907, not including the Caribbean. The Atlantic island of Bermuda (originally part of Virginia and, with the Bahamas, grouped with North America prior to 1783) was grouped with the Maritimes from 1783 until the formation of the Canadian dominion, and thereafter generally with the colonies in the British West Indies, although the Church of England continued to place Bermuda under the Bishop of Newfoundland until 1919. The term was first used informally in 1783, but it was uncommon before the Report on the Affairs of British North America (1839), called the Durham Report. These territories today form modern-day Canada and the Pacific Northwest of the United States.

English colonisation of North America began in the 16th century in Newfoundland, then began further south at Roanoke and Jamestown, Virginia, and reached its peak when colonies had been established through much of the Americas.

In 1775, on the eve of the American Revolution, British America included 23 territories in the Western Hemisphere northeast of New Spain, apart from the islands and claims of the British West Indies. These were:

The Somers Isles, or Bermuda, had been occupied by the Virginia Company since its flagship, the Sea Venture, was wrecked there in 1609, and the archipelago was officially added to the company's territory in 1612, then managed by a spin-off, the Somers Isles Company, 'til 1684, but maintained close links with Virginia and Carolina Colony (which was subsequently settled from Bermuda). The British Government originally grouped Bermuda with North America (the archipelago is approximately 1,035.26 km (643 mi) east-southeast of Cape Hatteras, North Carolina (with Cape Point on Hatteras Island being the nearest landfall); 1,236 km (768 mi) south of Cape Sable Island, Nova Scotia; 1,759 km (1,093 mi) northeast of Cuba, and 1,538 km (956 mi) due north of the British Virgin Islands. 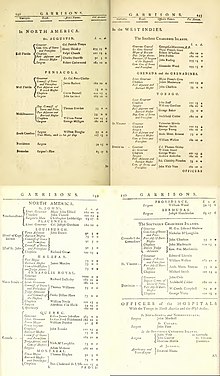 Although Bermudians, with close ties of blood and trade to the southern continental colonies (especially Virginia and South Carolina), tended towards the rebels early in the American War of Independence, the control of the surrounding Atlantic by the Royal Navy meant there was no likelihood of the colony joining the rebellion. Although the rebels were supplied with ships and gunpowder by the Bermudians, Bermudian privateers soon turned aggressively on rebel shipping. After the acknowledgement by the British Government of the independence of the thirteen rebellious continental colonies in 1783, Bermuda was grouped regionally by the British Government with The Maritimes and Newfoundland and Labrador, and, more widely, with British North America.

Following the war, the Royal Navy spent a dozen years charting the barrier reef around Bermuda to discover the channel that enabled access to the northern lagoon, the Great Sound, and Hamilton Harbour. Once this had been located, a base was established (initially at St. George's before the construction of the Royal Naval Dockyard, Bermuda) in 1794, when Vice Admiral Sir George Murray, Commander-in-Chief of the new River St. Lawrence and Coast of America and North America and West Indies Station, set up the first Admiralty House, Bermuda at Rose Hill, St. George's. In 1813, the area of command became the North America Station again, with the West Indies falling under the Jamaica Station, and in 1816 it was renamed the North America and Lakes of Canada Station. The headquarters was initially in Bermuda during the winter and Halifax during the summer, but Bermuda, became the year-round headquarters of the Station in 1821, when the area of command became the North America and Newfoundland Station.[2] The Royal Naval Dockyard, Halifax was finally transferred to the Royal Canadian Navy in 1907.[3][4]

A British Army garrison was re-established at Bermuda in 1794 (a small garrison had existed from 1701 to 1768, alongside the militia, and part of the Royal Garrison Battalion had been stationed there between 1778 and 1784) and was expanded greatly during the 19th Century, both to defend the colony as a naval base and to launch amphibious operations against the Atlantic coast of the United States in any war that should transpire. Prior to 1784, the Bermuda Garrison had been placed under the military Commander-in-Chief America in New York during the American War of Independence, but was to become part of the Nova Scotia Command until the 1860s (in 1815, Lieutenant-General Sir George Prevost was Captain-General and Governor-in-Chief in and over the Provinces of Upper-Canada, Lower-Canada, Nova-Scotia, and New~Brunswick, and their several Dependencies, Vice-Admiral of the same, Lieutenant-General and Commander of all His Majesty’s Forces in the said Provinces of Lower Canada and Upper-Canada, Nova-Scotia and New-Brunswick, and their several Dependencies, and in the islands of Newfoundland, Prince Edward, Cape Breton and the Bermudas, &c. &c. &c. Beneath Prevost, the staff of the British Army in the Provinces of Nova-Scotia, New-Brunswick, and their Dependencies, including the Islands of Newfoundland, Cape Breton, Prince Edward and Bermuda were under the Command of Lieutenant-General Sir John Coape Sherbrooke. Below Sherbrooke, the Bermuda Garrison was under the immediate control of the Governor of Bermuda, Major-General George Horsford).[5] The Royal Navy, British Army, Royal Marines, and Colonial Marines forces based in Bermuda carried out actions of this sort during the American War of 1812 (most notably the Burning of Washington in retribution for the "wanton destruction of private property along the north shores of Lake Erie" by American forces under Col. John Campbell in May 1814, the most notable being the Raid on Port Dover[6]) to draw United States forces away from the Canadian border.[7][8]]

After threats and squabbles over rich timber lands[11], the boundary with Maine was clarified by the Webster–Ashburton Treaty of 1842.

The Canadas were united into the Province of Canada in 1841.

On 1 July 1867, the Dominion of Canada was created by the British North America Act, 1867. The confederation process brought together the provinces of Canada, New Brunswick, and Nova Scotia. The former Province of Canada was split back into its two parts, with Canada East (Lower Canada) being renamed Quebec, and Canada West (Upper Canada) renamed Ontario.

Following confederation in 1867, the British Army withdrew from Canada in 1871, handing military defence over to the Canadian Militia. With the consequent abolition of the British Army's Nova Scotia Command, and the office of its Commander-in-Chief for British North America, the still-growing Bermuda Garrison was elevated to a separate Bermuda Command.[12]]

Although Newfoundland remained separate from Canada until 1949, Bermuda, following Canadian confederation, was increasingly perceived by the British Government as in, or at least grouped for convenience with, the British West Indies. The last administrative link to the Maritimes was the established church. In 1879 the Synod of the Church of England in Bermuda was formed and a Diocese of Bermuda became separate from the Diocese of Newfoundland, but continued to be grouped under the Bishop of Newfoundland and Bermuda until 1919, when Newfoundland and Bermuda each received its own bishop.[13]

In 1870, Rupert's Land was annexed to Canada as the Northwest Territories (NWT) and the new province of Manitoba. British Columbia, the British colony on the west coast north of the 49th parallel, including all of Vancouver Island, joined as Canada's sixth province in 1871, and Prince Edward Island joined as the seventh in 1873. The boundary of British Columbia with Washington Territory was settled by arbitration in 1872, and with Alaska by arbitration in 1903.

The Arctic Archipelago was ceded by Britain to Canada in 1880 and added to the Northwest Territories (NWT). Later on, large sections of the NWT were split off as new territories (the Yukon Territory in 1898 and Nunavut in 1999), or provinces (Alberta and Saskatchewan, both in 1905), or were added to existing provinces (Manitoba, Ontario, and Quebec, in stages ending in 1912).

In 1907, the sole remaining British North American colony, Newfoundland, was granted the status of a Dominion, although starting in 1934 it returned to British administration under the Commission of Government. In 1949, the island of Newfoundland, and its associated mainland territory of Labrador, joined Canada as the tenth province.

Canada became semi-independent beginning in 1867, and fully sovereign on foreign affairs beginning with the Statute of Westminster 1931. Canada gained the right to establish and accept foreign embassies, with the first one being in Washington, D.C.

Then the last vestiges of Canada's constitutional dependency upon Britain remained until Canadians from various provinces agreed on an internal procedure for amending the Canadian Constitution. This agreement was implemented when the British Parliament passed the Canada Act 1982 at the request of Parliament of Canada.[14][1]

The colonies that existed before the signing of the 1846 Oregon Treaty:

Besides the local colonial governments in each colony, British North America was administered directly via London.

The postal system had a deputy based in British North America, with administration from London.[15]