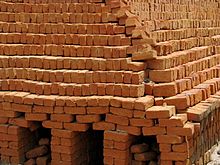 A brick clamp in rural India 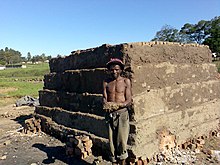 A brick clamp is a traditional method of baking bricks, done by stacking unbaked bricks with fuel under or among them, then igniting the fuel.[1] The clamp is considered a type of kiln. If the clamp is insulated by packing earth or mud around it, it becomes a scove kiln.[2]