Brazil–Canada relations refers to the diplomatic relations between the Federative Republic of Brazil and Canada. In 2016, approximately 36,000 people in Canada claim to be of Brazilian descent. It's also estimated that there are around 12,000 people in Brazil that are of Canadian descent.[1] Both nations are members of the G20, Organization of American States, United Nations and the World Trade Organization. 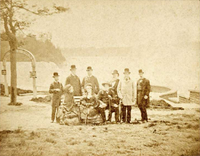 In 1866, Canada opened a consulate in Rio de Janeiro. In 1876, during his second world tour, Emperor Pedro II of Brazil paid a visit to Canada and visited the Niagara Falls and various locations within Ontario.[2] During World War II, both nations fought side by side during the Italian campaign. In 1941, Brazil opened an embassy in Ottawa and Canada opened an embassy in Brasília in 1944.[3]

In January 1998, Jean Chrétien became the first Canadian Prime Minister to visit Brazil. In 2001, the visit was reciprocated when Brazilian President Fernando Henrique Cardoso paid a visit to Canada.[3] After the initial visits, there would be several other high-level visits and reunions between leaders of both nations. Since 1998, Canada and Mercosur (which includes Brazil) have been discussing and negotiating on a free trade agreement.[4]

Among the central themes of the bilateral relationship between both nations are partnerships in education, science, agricultural policy, technology and innovation. Canada is the country that hosts the largest number of Brazilian students, mostly interested in studying English and French for short periods of time.[3] Both nations are major global players in medium size airplanes with Brazil's Embraer and Canada's Bombardier.

Canada is the main destination for Brazilian investment abroad, with a stock of over US$20 billion, making Brazil the seventh largest source of foreign direct investment in the country.[3] Brazilian investments are concentrated in the mining sector. Canadian investments in Brazil, in turn, reach around US$15 billion and cover areas such as civil engineering, technology and mining.[3]

High-level visits from Brazil to Canada

High-level visits from Canada to Brazil

Both nations have signed a few agreements such an Agreement on Science, Technology and Innovation Cooperation (2008); Memorandum of Understanding on Sustainable Development in Minerals and Metals (2009); Agreement on Social Security (2011); Memorandum of Understanding on International Development Cooperation Effectiveness (2011); Air Transport Agreement (2011) and an Agreement to explore possible avenues for cooperation in the use of outer space for peaceful purposes (2011).[5]

Embassy of Brazil in Ottawa