Brandon is the second-largest city in the province of Manitoba, Canada. It is located in the southwestern corner of the province on the banks of the Assiniboine River, approximately 214 km (133 mi) west of the provincial capital, Winnipeg, and 120 km (75 mi) east of the Saskatchewan border. Brandon covers an area of 77.41 km2 (29.89 sq mi) and has a population of 48,859,[2] while its census metropolitan area has a population of 58,003.[3] It is the primary hub of trade and commerce for the Westman region as well as parts of southeastern Saskatchewan and northern North Dakota, an area with a combined population of over 180,000 people.[4]

The City of Brandon was incorporated in 1882,[5] having a history rooted in the Assiniboine River fur trade as well as its role as a major junction on the Canadian Pacific Railway.[6] Known as The Wheat City, Brandon's economy is predominantly associated with agriculture;[7] however, it also has strengths in health care, manufacturing, food processing, business services, and transportation.[8][9]

Brandon is an important part of the higher education network in Manitoba, with several notable facilities located in the city including Brandon University, Assiniboine Community College, and the Manitoba Emergency Services College.[10] Canadian Forces Base Shilo is located 30 km (19 mi) east of Brandon and maintains close ties with the city.[11] Brandon's Keystone Centre, one of the largest consolidated entertainment, recreation, convention, and agriculture complexes in Canada,[12] is the home of the Brandon Wheat Kings and the Royal Manitoba Winter Fair.[13]

Prior to the influx of people from Eastern Canada, the area around Brandon was primarily used by the Sioux people, the Bungays, the Yellow Quills, and the Bird Tails.[14] In the 1870s and early 1880s, the Plains Bison were nearly wiped out by over-hunting. With the destruction of their staff of life, the buffalo, the nomadic Sioux people began to agree to settle in reservations such as the Sioux Valley Dakota Nation, or left the area entirely.

French Canadians also passed through the area on river boats on their way to the Hudson Bay Post, Fort Ellice located near present-day St. Lazare, Manitoba. The city of Brandon gets its name from the Blue Hills south of the city, which got their name from a Hudson's Bay trading post known as Brandon House, which got its name from a hill on an island in James Bay where Captain James had anchored his ship in 1631.[14]

During the 1870s it was believed by most that the transcontinental railway would take a northwesterly direction from Portage la Prairie. Many thought that the route would most likely go through either Minnedosa or Rapid City, Manitoba because they were both located at natural river crossings. Rapid City was the front runner for the site of the new railway and had prepared for the impending building boom accordingly. But suddenly, in 1881, the builders of the railway decided to take a more westerly route from Winnipeg, towards Grand Valley.[14] Grand Valley was located on the northern side of the Assiniboine, opposite the side of the river where present-day Brandon sits.

Grand Valley was originally settled by two brothers John and Dougal McVicar, and their families. With the expectation of the new railroad, settlers and prospectors now rushed to an area they had previously avoided.[14] Around 1879 a few settlers led by Reverend George Roddick had begun to build their new homes about 10 miles (16 km) south of Grand Valley, at the foot of the Brandon Hills.[14] 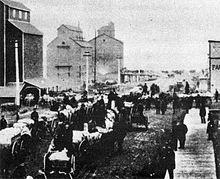 Wagons loaded with bags of grain awaiting delivery to elevators in Brandon, c. 1888

Meanwhile, in Grand Valley with the promise of the railway, the town began to boom. Regular voyages were made by steam sternwheelers to the city, each bringing more and more settlers.[14] In the spring of 1881, General Thomas L. Rosser, Chief Engineer of the Canadian Pacific Railway arrived in Grand Valley. It was Rosser's job to choose the townsites for the railway. Rosser approached Dougald McVicar of Grand Valley and offered him $25,000 for the railway in Grand Valley. McVicar countered with $50,000 to which Rosser replied that "I'll be damned if a town of any kind is ever built here".[14] So instead Rosser crossed the Assiniboine river and built the site of the railway on the high sandy south of the River, 2 miles (3.2 km) west of Grand Valley. So the site was then moved to a site just west of today's current First Street bridge in Brandon. A shanty had been built there by a man named J.D. Adamson, and it was on this quarter section Adamson claimed that Rosser chose as the townsite for the CPR Railway and named Brandon.[14]

Rosser had chosen Brandon as the townsite in May 1881, within a year settlers had flocked to Brandon in such numbers that it was incorporated as a city. Brandon never spent any time as a town or village but has only existed as a city.[14]

An Internment camp was set up at the Exhibition Building in Brandon from September 1914 to July 1916.[15] Post World War II, Brandon experience a minor disaster when an explosion at the Manitoba Power Commission's steam plant caused the 40 metre (130 ft) brick chimney to collapse, killing two workers in the process.[16] 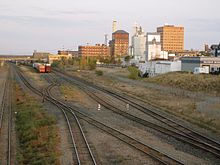 Brandon is located in south-western Manitoba, on the banks of the Assiniboine river. It is located in the Canadian Prairies and resides in the aspen parkland ecoregion of the prairies.[18] The terrain is generally flat and rolling surrounding Brandon, and there is a large valley located within the city. The Brandon hills are located to the southeast, from which Brandon got its name. Brandon is 214 km (133 mi) from the provincial capital, Winnipeg; and 120 km (75 mi) from the Saskatchewan border. 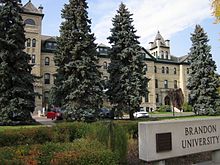 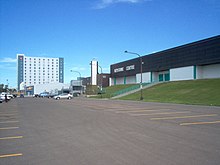 The Brandon Sun publishes newspapers on a daily basis.

Music and the arts 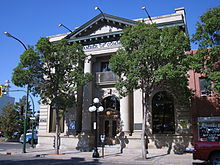 Brandon hosts numerous arts festivals every year, including the Brandon Festival of the Arts, Brandon Jazz Festival, and the Brandon Folk Music Festival. In addition to the music festivals the Brandon University School of Music hosts the annual 'Pro Series' which has included guests like Bob Brookmeyer, George Crumb, and the Winnipeg Symphony Orchestra. In 2009 Brandon was host to the Western Canadian Music Awards.

The "Words Alive" was an annual literary festival held in downtown Brandon, from 2007-10. Authors that participated in this festival included Robert J. Sawyer, Maggie Siggins, Fred Stenson and Corey Redekop.

Some of the local arts venues include the Western Manitoba Centennial Auditorium, Lorne Watson Recital Hall, Evans Theatre, and the Art Gallery of Southwestern Manitoba.