Languages typically construct phrases with a head word (or nucleus) and zero or more dependents (modifiers). The following phrases show the phrase heads in bold.

Examples of phrases that contain both left- and right-branching (= head-medial phrases):

Concerning phrases such as the house and the house there, this article assumes the traditional NP analysis, meaning that the noun is deemed to be head over the determiner. On a DP-analysis (determiner phrase), the phrase the house would be right-branching instead of left-branching.

Left- and right-branching structures are illustrated with the trees that follow. Each example appears twice, once according to a constituency-based analysis associated with a phrase structure grammar[4] and once according to a dependency-based analysis associated with a dependency grammar.[5] The first group of trees illustrate left-branching: 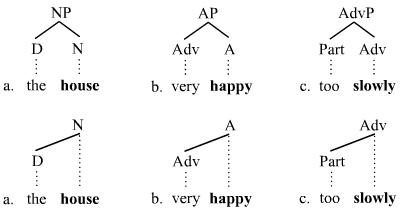 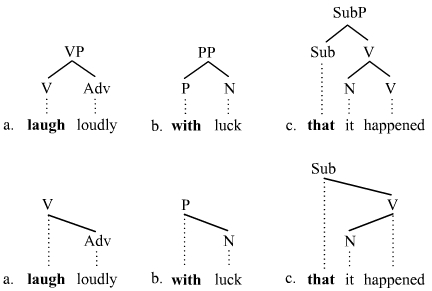 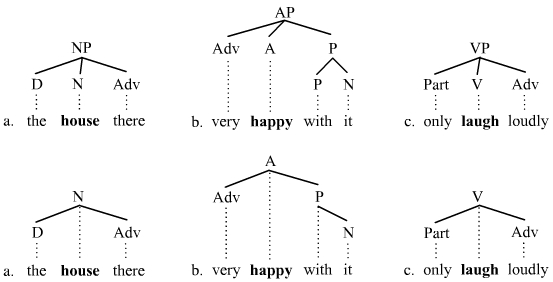 The combination of left- and right-branching is now completely visible in both the constituency- and dependency-based trees. The head appears in a medial position, which means that the phrase combines both types of branching. Note that the (b)-trees also contain a PP phrase that is an instance of pure right-branching.

The category Po (= possessive) is used to label possessive 's. The following sentence is completely right-branching:

Determiners (e.g. the) always and subjects (e.g. the child) usually appear on left branches in English, but infinitival verbs (e.g. try, eat) and the verb particle to usually appear on right branches. In the big picture, right-branching structures tend to outnumber the left-branching structures in English, which means that trees usually grow down to the right.

The X-bar schema[7] combines left- and right-branching. The standard X-bar schema has the following structure:

Much work in Government and Binding Theory (GB), the Minimalist Program (MP), and Lexical Functional Grammar (LFG) assumes all branching to be binary.[8] Other theories (both constituency- and dependency-based ones), e.g. early Transformational Grammar, Head-Driven Phrase Structure Grammar, Meaning-Text Theory, Word Grammar, etc. allow for n-ary branching. This distinction can have a profound impact on the overall nature of the theory of syntax. The two main possibilities in a phrase structure grammar are illustrated with the following trees:

As stated above, the main branching trait for a language is just a tendency and it often shows exceptions. Spanish, for example, while overwhelmingly right-branching, puts numeral modifiers before nouns and, in certain cases, objects before verbs. Languages like English or Swedish, though regarded as being right-branching because the main verbs precede direct objects, place adjectives and numerals before their nouns. Japanese and most other languages of northeastern Asia and the Indian subcontinent, on the other hand, are practically a model for rigidly left-branching languages. The Mon–Khmer and Austronesian languages of southeast Asia and many African languages come close to rigidly right-branching, with numerals as well as adjectives following their nouns and with degree words like very, too, extremely, and quite following the adjectives they modify.