Boutros Boutros-Ghali (/ˈbuːtrɒs ˈɡɑːli/; Coptic: Ⲡⲉⲧⲣⲟⲥ Ⲡⲉⲧⲣⲟⲥ-Ⲅⲁⲗⲓ, Arabic: بطرس بطرس غالي‎ Buṭrus Buṭrus Ghālī, Egyptian Arabic: [ˈbotɾos ˈɣæːli]; 14 November 1922 – 16 February 2016) was an Egyptian politician and diplomat who was the sixth Secretary-General of the United Nations (UN) from January 1992 to December 1996. An academic and former Vice Foreign Minister of Egypt, Boutros-Ghali oversaw the UN over a period coinciding with several world crises, including the breakup of Yugoslavia and the Rwandan genocide. He went on to serve as the first Secretary-General of the Organisation internationale de la Francophonie from 16 November 1997 to 31 December 2002.

Boutros Boutros-Ghali was born in Cairo, Egypt, on 14 November 1922 into a Coptic Christian family.[1] His father Yusuf Butros Ghali was the son of Boutros Ghali Bey then Pasha (also his namesake), who was Prime Minister of Egypt from 1908 until he was assassinated in 1910.[2][3] His mother Safela Mikhail Sharubim was daughter of Mikhail Sharubim (1861–1920), a prominent public servant and historian.[4]

Boutros-Ghali graduated from Cairo University in 1946.[5] He received a PhD in international law from the University of Paris and diploma in international relations from the Sciences Po in 1949. During 1949–1979, he was appointed Professor of International Law and International Relations at Cairo University. He became President of the Centre of Political and Strategic Studies in 1975 and President of the African Society of Political Studies in 1980. He was a Fulbright Research Scholar at Columbia University from 1954 to 1955, Director of the Centre of Research at The Hague Academy of International Law from 1963 to 1964, and Visiting Professor at the Faculty of Law at Paris University from 1967 to 1968. In 1986 he received an honorary doctorate from the Faculty of Law at Uppsala University, Sweden.[6] He was also the Honorary Rector of the Graduate Institute of Peace Studies, a branch of Kyunghee University Seoul.[citation needed] 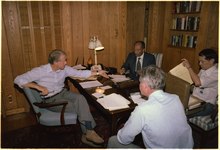 According to investigative journalist Linda Melvern, Boutros-Ghali approved a secret $26 million arms sale to the government of Rwanda in 1990 when he was Foreign Minister, the weapons stockpiled by the Hutu regime as part of the fairly public, long-term preparations for the subsequent genocide. He was serving as UN Secretary-General when the killings occurred four years later.[8]

Boutros-Ghali ran for Secretary-General of the United Nations in the 1991 selection. The top post in the UN was opening up as Javier Pérez de Cuéllar of Peru reached the end of his second term, and Africa was next in the rotation. Boutros-Ghali tied Bernard Chidzero of Zimbabwe in the first two rounds of polling, edged ahead by one vote in round 3, and fell behind by one vote in round 4. After several countries withdrew their support for Chidzero, fed by fears that the United States was trying to eliminate both of the leading candidates, Boutros-Ghali won a clear victory in round 5.[9]

Boutros-Ghali's term in office remains controversial. In 1992, he submitted An Agenda for Peace, a suggestion for how the UN could respond to violent conflict. He set three goals: for the UN to be more active in promoting democracy, for the UN to conduct preventative diplomacy to avert crises, and to expand the UN's role as peacekeeper. Although the goals were consistent with those of American President George H. W. Bush, he nevertheless clashed repeatedly with the United States, especially with his efforts to involve the UN more deeply in the civil wars in Somalia 1992 and in Rwanda in 1994. The United States refused to send troops under UN leadership.[10] Boutros-Ghali was criticised for the UN's failure to act during the 1994 Rwandan genocide, which officially left over one million people dead[citation needed], and he appeared unable to muster support in the UN for intervention in the continuing Angolan Civil War. One of the hardest tasks during his term was dealing with the crisis of the Yugoslav Wars after the disintegration of the former Yugoslavia. The UN peacekeeping force was ineffective in Bosnia, forcing the intervention by NATO in December 1995. His reputation became entangled in the larger controversies over the effectiveness of the UN and the role of the United States in the UN.

Some Somalis believed he was responsible for an escalation of the Somalia crisis by undertaking a personal vendetta against Mohamed Farrah Aidid and his Habr Gidr clan, favouring their rivals, the Darod the clan of the former dictator Mohamed Siad Barre. It was believed that he demanded the 12 July 1993 US helicopter attack on a meeting of Habr Gidr clan leaders, who were meeting to discuss a peace initiative put forward by the leader of the UN Mission in Mogadishu, retired U.S. Admiral Jonathan Howe. It is generally believed that the majority of the clan elders were eager to arrange a peace and to rein in the provocative activities of their clan leader, Mohamed Farrah Aidid, but, after this attack on a peaceful meeting, the clan was resolved on fighting the Americans and the UN, leading to the Battle of Mogadishu on 3–4 October 1993.[11]

Boutros-Ghali ran unopposed for the customary second term in 1996, despite efforts by the United States to unseat him. U.S. ambassador Madeleine Albright asked Boutros-Ghali to resign and offered to establish a foundation for him to run, an offer that other Western diplomats called "ludicrous."[12] American diplomatic pressure also had no effect, as other members of the Security Council remained unwavering in their support for Boutros-Ghali. He won 14 of the 15 votes in the Security Council, but the sole negative vote was a U.S. veto.[13][14] After four deadlocked meetings of the Security Council, France offered a compromise in which Boutros-Ghali would be appointed to a short term of two years, but the United States rejected the French offer. Finally, Boutros-Ghali suspended his candidacy, becoming the only Secretary-General ever to be denied a second term by a veto.

Boutros Boutros-Ghali's wife, Leia Maria Boutros-Ghali, born Leia Nadler, was raised in an Egyptian Jewish family in Alexandria and converted to Catholicism as a young woman.[5][15]

From 1997 to 2002, Boutros-Ghali was Secretary-General of La Francophonie, an organisation of French-speaking nations. From 2003 to 2006, he served as the chairman of the board of the South Centre,[16] an intergovernmental research organisation of developing countries. Boutros-Ghali played a "significant role"[17] in creating Egypt's National Council for Human Rights, and served as its president until 2012.[18][19]

Boutros-Ghali supported the Campaign for the Establishment of a United Nations Parliamentary Assembly and was one of the initial signatories of the Campaign's appeal in 2007. In a message to the Campaign, he stressed the necessity to establish democratic participation of citizens at the global level.[20] From 2009–2015 he also participated as jury member for the Conflict Prevention Prize, awarded every year by the Fondation Chirac.[21]

Boutros-Ghali died aged 93 in a hospital in Cairo, after having been admitted for a broken pelvis or leg, on 16 February 2016.[22][23][24][25] A military funeral was held for him with prayers led by Coptic Pope Tawadros II. He is buried at Petrine Church in Abbassia, Cairo.[26] 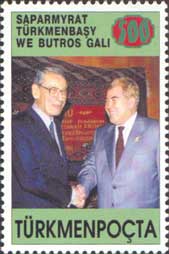 As Secretary-General, Boutros-Ghali wrote An Agenda for Peace. He also published other memoirs: