Within the limits set by that code there is another set of rules, the International Code of Nomenclature for Cultivated Plants (ICNCP) which applies to plant cultivars that have been deliberately altered or selected by humans (see cultigen).

Botanical nomenclature has a long history, going back beyond the period when Latin was the scientific language throughout Europe, to Theophrastus (c. 370–287 BC), Dioscorides (c. 40 – 90 AD) and other Greek writers. Many of these works have come down to us in Latin translations. The principal Latin writer on botany was Pliny the Elder (23–79 AD). From Mediaeval times, Latin became the universal scientific language (lingua franca) in Europe. Most written plant knowledge was the property of monks, particularly Benedictine, and the purpose of those early herbals was primarily medicinal rather than plant science per se. It would require the invention of the printing press (1450) to make such information more widely available.[1][2][3]

Leonhart Fuchs, a German physician and botanist is often considered the originator of Latin names for the rapidly increasing number of plants known to science. For instance he coined the name Digitalis in his De Historia Stirpium Commentarii Insignes (1542).

A key event was Linnaeus’ adoption of binomial names for plant species in his Species Plantarum (1753).[4]

In the nineteenth century it became increasingly clear that there was a need for rules to govern scientific nomenclature, and initiatives were taken to refine the body of laws initiated by Linnaeus. These were published in successively more sophisticated editions. For plants, key dates are 1867 (lois de Candolle) and 1906 (International Rules of Botanical Nomenclature, 'Vienna Rules'). The most recent is the Shenzhen Code, adopted in 2018.

Another development was the insight into the delimitation of the concept of 'plant'. Gradually more and more groups of organisms are being recognised as being independent of plants. Nevertheless, the formal names of most of these organisms are governed by the (ICN), even today. Some protists that do not fit easily into either plant or animal categories are treated under either or both of the ICN and the ICZN. A separate Code was adopted to govern the nomenclature of Bacteria, the International Code of Nomenclature of Bacteria.

Plant taxonomy is an empirical science, a science that determines what constitutes a particular taxon (taxonomic grouping, plural: taxa): e.g. "What plants belong to this species?" and "What species belong to this genus?". The definition of the limits of a taxon is called its 'circumscription'. For a particular taxon, if two taxonomists agree exactly on its circumscription, rank and position (i.e. the higher rank in which it is included) then there is only one name which can apply under the ICN.[5] Where they differ in opinion on any of these issues, one and the same plant may be placed in taxa with different names. As an example, consider Siehe's Glory-of-the-Snow, Chionodoxa siehei: 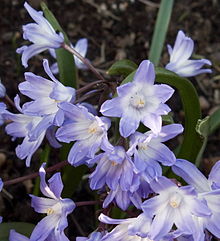 Flowers of Chionodoxa siehei, which can also be called Scilla siehei, or included in Chionodoxa forbesii or in Scilla forbesii

In summary, if a plant has different names or is placed in differently named taxa:

Various botanical databases such as Plants of the World Online and World Flora Online make determinations as to whether a name is accepted, eg accepted species. If a name is not accepted, it may be because the name is a synonym for a name that is already accepted, and is listed as such. Another term is ambiguous to denote a name that is not accepted because its separate existence cannot be reliably determined. For instance, specimens that are damaged, immature or the necessary information or expertise ids not available. This can lead to abundances, multiple published names for the same entity.[12]