Borgarnes (Icelandic pronunciation: ​[ˈpɔrkarˌnɛs]) is a town located on a peninsula at the shore of Borgarfjörður in Iceland and is the largest town in the Borgarbyggð municipality with a population of about 3750 residents. It is a main junction in Iceland and the gateway to the Snaefellsnes National Park. Iceland's capital Reykjavik is 69 kilometers from the center of Borgarnes. The second largest bridge in Iceland, the Borgarfjarðarbrú, connects traffic to and from Reykjavik.

There are four national forests in the region (approximately 40 km from the town center) which are overseen by the Icelandic Forest Service.[1] The forest in Borgarfjardur are mix of Birch woods and native conifers. These forests are Vatnshorn, Norðtunga, Selskógar, Stalpastaðir and Jafnaskarð. Borgarnes has the oldest and tallest of the birch trees in Iceland.[2]

Borgarnes was founded in the late nineteenth-century, in a region that served as the setting of Egil's Saga.[3] The town draws its name from Borg á Mýrum, the farm of Egill Skallagrimsson, the saga's poet-hero protagonist. A museum in Borgarnes, the Settlement Center, is devoted to the region's ties to Egill Skallagrimsson.[4] 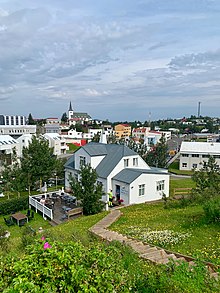 View of the town of Borgarnes

Borgarnes is also one of the filming locations in the Hollywood film The Secret Life of Walter Mitty. The Geirabakari Kaffihus, which is featured in the film, was transformed into Papa John's during the filming.[7] Borgarnes is the birthplace of Icelandic composer Anna Thorvaldsdottir.

Borgarnes' commerce is primarily based on agriculture, tourism and culture.[8]

The city of Borgarnes as seen from the south, driving up on Route 1.