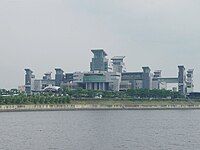 A border checkpoint is a place, generally between two countries, where travelers or goods are inspected. Authorization often is required to enter a country through its borders. Access-controlled borders often have a limited number of checkpoints where they can be crossed without legal sanctions. Arrangements or treaties may be formed to allow or mandate less restrained crossings (e.g. the Schengen Agreement). Land border checkpoints (land ports of entry) can be contrasted with the customs and immigration facilities at seaports, international airports, and other ports of entry.

Checkpoints are usually manned by a uniformed service (sometimes referred to as customs service or border patrol agents).

Italian-Swiss border post - since Switzerland joined the Schengen Area in 2009, this checkpoint is solely for customs formalities

The Schengen Borders Code, which forms part of the law of the European Union, defines some terms as follows (particularities with respect to the EU are left out, in order to emphasize general usability of those definitions):[3]

These definitions mean that a place where a road crosses an internal Schengen border is legally not a "border crossing point".

Busiest checkpoints in the world

This is a list of the busiest land border checkpoints in the world, handling more than 35 million travelers in both directions annually. These travelers (or individual crossings) comprise pedestrians, drivers and vehicle passengers. International border checkpoints are in green.

This is a list of the busiest seaports in the world, with proper customs, immigration and quarantine facilities to be deemed as maritime checkpoints. Although figures simply represent total passenger traffic, most (if not, all) of the passengers served at these ports are bound for other countries and have to pass through checkpoint (i.e. the port is not a domestic one). This list only includes ports that handle more than 4 million passengers annually.