Borås and the river Viskan in winter. 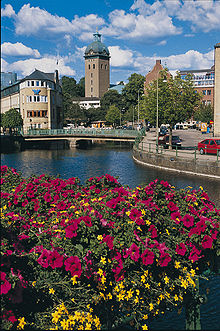 A view from Krokshall square onto Caroli church with Viskan in front.

listen)) is a city (officially, a locality) and the seat of Borås Municipality, Västra Götaland County, Sweden. It had 66,273 inhabitants in 2010.[1]

Borås is located at the point of two crossing railways, among them the railway between Gothenburg and Kalmar, and is often considered[citation needed] the Swedish city gaining the most from the nationwide railway system laid between 1870 and 1910.

The city of Borås received its privileges in 1621 by King Gustav II Adolf. The reason was to give local pedlars a legal place for vending their merchandise (and for the government the ability to collect taxes on this trade). The city developed soon after it was founded. After a century it had increased to over 2,000 inhabitants. Borås has been ravaged by fires four times: in 1681, 1727, 1822 and 1827. The Caroli church is the oldest of Borås's buildings, and has withstood all fires.

In its 2017 report, Police in Sweden placed the Norrby, Hässleholmen and Hulta districts in the most severe category of urban areas with high crime rates.[5]

The city arms depicts two pairs of sheep shears, a tribute to the vast number of smiths in the town in early history. It currently holds the Swedish record in the number of established mail-order firms.

Outside the city in the industrial park of Viared, there are many companies specializing in logistics. Industries in Borås have close collaboration with the University College of Borås as well as the SP Technical Research Institute of Sweden, the largest technical research institute of Sweden, both located in Borås. Besides being the home of the official Swedish Kilogram-weight and the atomic clock that sets the national time, SP conducts various testing and research to promote consumer safety.

Borås is a railway junction. The Coast-to-Coast Line from Gothenburg to Kalmar runs through the city centre. At the Borås Railway Station it meets the Älvsborg Line (heading north to Herrljunga and Uddevalla) and the Viskadal Line (going south to Varberg). Continuous passenger trains often run through the city along the two latter lines.

As of 2019 SJ runs 3-4 daily trains in each direction between Gothenburg and Kalmar. The regional traffic agency Västtrafik runs frequent trains between Borås and Gothenburg, Herrljunga, and Varberg. All passenger trains stop at Borås railway station. Trains on the northern line to and from Herrljunga also stop at Knalleland halt within the city.

Other teams are Borås Hockey Club, M7 (a basketball team that worked with Magic Johnson for a short while) and Borås Rhinos which is an American football team.

Other sports that can be practiced in Borås are: archery, track and field, rowing, handball, table tennis, tennis, skiing, orienteering, sport shooting, swimming, golf, equestrian, bowling, cheerleading, floorball and various martial arts. Borås Judoclub has tried to create a national center for judo. Members from the club that have participated in the olympics include Per Kjellin and Lars Adolfsson (who competed twice).

Boråshallen is the largest indoor sports hall in Borås, where the Mariedal cup, an indoor football competition, is held annually in October or November. The competition started in 1978 in its current form.

The city also hosted the 2019 European Athletics U20 Championships.

Other sports clubs located in Borås include:

Every summer, a number of free outdoor concerts are held on the town square on Thursday evenings.

The city has lately been recognized as a city of outdoor sculptures, such as Catafalque by Sean Henry, Carl Fredrik Reuterswärd's knotted non-violence pistol and a huge bronze version of Pinocchio called Walking to Borås by the American pop artist Jim Dine.

During the holiday All Saints' Day, there is an annual gaming convention called Borås Spelkonvent, where people, mostly youths, meet to play various board games, Warhammer 40k and Magic: The Gathering among other games.

Borås has a cold oceanic climate, influenced by Atlantic trade winds travelling without major obstacles over the land, with low mean temperatures, compared to coastal areas and the more urban metropolis, Gothenburg, near to the west. Considering it being inland and quite far south, summer temperatures are rather subdued by Swedish standards, whilst winter average highs hover just above freezing. Being inland still enables severe extremes to sometimes occur, such as a 36 °C (97 °F) reading from July 1901, the warmest July temperature on record in Sweden, although not a national record (38 °C (100 °F) set on two different June dates and years on other stations). The coldest extreme was set in February 1966 with −34.1 °C (−29.4 °F), a severely cold temperature for southern Sweden.

By Swedish standards, the climate of Borås is very wet, with a precipitation average of 975 millimetres (38.4 in). This is also due to marine airflows coming from the Atlantic and easily being transported over lowland areas, where the precipitation eventually falls. This renders heavy solid or wet snowfall in winter and the freeze-thaw cycle is normally dominant, with irregular snow cover.