Bopomofo, also called Zhuyin (Chinese: 注音) or Mandarin Phonetic Symbols, is the major Chinese transliteration system for Mandarin Chinese and other related languages and dialects which is nowadays most commonly used in Taiwanese Mandarin. It is also used to transcribe other varieties of Chinese, particularly other varieties of Standard Chinese and related Mandarin dialects, as well as Taiwanese Hokkien.

Zhuyin Fuhao and Zhuyin are traditional terms, whereas Bopomofo is the colloquial term, also used by the ISO and Unicode. Consisting of 37 characters and four tone marks, it transcribes all possible sounds in Mandarin. Zhuyin was introduced in China by the Republican Government in the 1910s and used alongside the Wade–Giles system, which used a modified Latin alphabet. The Wade system was replaced by Hanyu Pinyin in 1958 by the Government of the People's Republic of China,[2] and at the International Organization for Standardization (ISO) in 1982.[3] Bopomofo is an official transliteration system in Taiwan, being used in dictionaries and other documents. It is widely used as the main electronic input method for Mandarin Chinese in Taiwan (ROC). Taiwan adopted Hanyu Pinyin as one of the official romanization systems for Mandarin Chinese in 2009,[4] but the system is not commonly used in electronic input.

Similarly to the way that the word "alphabet" is ultimately derived from the names of the first two letters of the alphabet (alpha and beta), the name "Bopomofo" is derived from the first four syllables in the conventional ordering of available syllables in Mandarin Chinese. The four Bopomofo characters (ㄅㄆㄇㄈ) that correspond to these syllables are usually placed first in a list of these characters. The same sequence is sometimes used by other speakers of Chinese to refer to other phonetic systems.[citation needed]

Main article: Commission on the Unification of Pronunciation § Phonetic symbols

The Commission on the Unification of Pronunciation, led by Wu Zhihui from 1912 to 1913, created a system called Zhuyin Zimu,[6] which was based on Zhang Binglin's shorthand. A draft was released on July 11, 1913, by the Republic of China National Ministry of Education, but it was not officially proclaimed until November 23, 1928.[6] It was later renamed first Guoyin Zimu and then, in April 1930, Zhuyin Fuhao. The last renaming addressed fears that the alphabetic system might independently replace Chinese characters.[8]

Bopomofo is the predominant phonetic system in teaching reading and writing in elementary school in Taiwan. It is also the most popular way to enter Chinese characters into computers and smartphones and to look up characters in a dictionary.

In elementary school, particularly in the lower years, Chinese characters in textbooks are often annotated with Bopomofo as ruby characters as an aid to learning. Additionally, one children's newspaper in Taiwan, the Mandarin Daily News, annotates all articles with Zhuyin ruby characters.

In teaching Mandarin, Taiwan institutions and some overseas communities such as Filipino Chinese use Bopomofo.

Bopomofo is shown in a secondary position to Hanyu Pinyin in all editions of Xiandai Hanyu Cidian from the 1960 edition to present 2016 edition (7th edition). 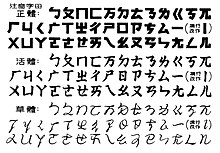 The Zhuyin characters were created by Zhang Binglin, taken mainly from "regularized" forms of ancient Chinese characters, the modern readings of which contain the sound that each letter represents. The consonants are listed in order of place of articulation, from the front of the mouth to the back, /b/, /p/, /m/, /f/, /d/, /t/, /n/, /l/ etc.

Zhuyin is written in the same stroke order rule as Chinese characters. Note that ㄖ is written with three strokes, unlike the character from which it is derived (Chinese: 日; pinyin: rì), which has four strokes.

ㄧ can be written as a vertical line (

) or a horizontal line (

Unlike Hanyu Pinyin, Zhuyin aligns well with the hanzi characters in books whose texts are printed vertically, making Zhuyin better suited for annotating the pronunciation of vertically oriented Chinese text.

Below is an example for the word "bottle" (pinyin: píngzi):

Zhuyin and pinyin are based on the same Mandarin pronunciations, hence there is a one-to-one correspondence between the two systems:

Use outside Standard Mandarin

Three letters were formerly used in the 1913 standard of Mandarin as well as in non-Mandarin Chinese varieties. Some Zhuyin fonts do not contain these letters; see External links for PDF pictures.

In Taiwan, Bopomofo is used to teach Taiwanese Hokkien, and is also used to transcribe it phonetically in contexts such as on storefront signs, karaoke lyrics, and film subtitles. 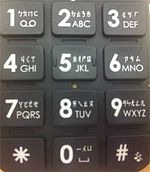 An example of a Zhuyin keypad for Taiwan

A typical keyboard layout for Zhuyin on computers

Zhuyin was added to the Unicode Standard in October 1991 with the release of version 1.0.

Additional characters were added in September 1999 with the release of version 3.0.

The Unicode block for these additional characters, called Bopomofo Extended, is U+31A0–U+31BF: