The Park of Bolívar (Parque de Bolívar) or Bolívar Park (Parque Bolívar), as it is popularly known, is an urban park in Medellín, Antioquia, Colombia. The park was inaugurated in 1892 and named in honor of the liberator Simón Bolívar. In 1923, an equestrian statue was erected in the center of the park, designed by the Italian sculptor Giovanni Anderlini and cast by the Italian sculptor Eugenio Maccagnani.

The park occupies two blocks, with approximately 14,400 m2 in area divided between green and paved areas. Its varied landscaping includes native trees. This urban space, replete with historical and cultural symbolism, is considered a symbol of the city itself. It is a main meeting place used by the city's different generations. Around the park are located several cultural sites of the city: at the north side the Metropolitan Cathedral of Medellín, and at the southeastern coast is the Lido Theater, run by Ballet Folklórico de Antioquia. Also worthy of appreciation are nearby old houses, in the former luxury residential sector of the city center. On the first three Sundays of each month at 11:15 a.m. the Banda Sinfónica Universidad de Antioquia holds their traditional Sunday open-air concert. The first Saturday of each month, the park hosts the traditional San Alejo market.[1] 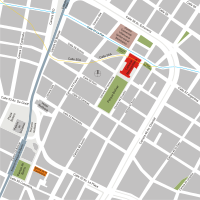 Berrío and Bolívar parks setting. The light gray line is the metro; the red zone is the cathedral, and the orange, the Basilica of Our Lady of Candelaria.

The Bolívar Park is located in the neighborhood of Villanueva, in the downtown area of Medellín. The avenues that converge near the ends of the park are named after places and events related to freedom: the calles are Perú and Bolivia, and the carreras are Venezuela and Ecuador, nations liberated by Bolívar. Two other streets are Caracas and La Paz, the latter passes just the rear of the cathedral. Along the Junín carrera, which ends in the south side of the park, can be found one of the more traditional shopping towns. Its name commemorates the Battle of Junín.[2]

The nearby streets have mixed usage as housing, business, trade and service industries. Traditionally, the park has been a place for meetings and cultural events, such the Retreta Dominical o del Parque (Sundays open-air concert), a tradition for more than 100 years, which is held by the Banda Sinfónica Universidad de Antioquia on the first three Sundays of the month at 11:15 a.m. Also, there is the Crafts Fair of San Alejo, which takes place the first Saturday of each month.[1] Moreover, the park often has storytelling, street theatre and other events.

Due to social programs, and police presence, the area has been being recovered from security issues.[2] Nowadays, the park is visited by both locals and tourists, with both the cathedral and the statue of Bolívar as the principal meeting places. There are 15 buildings listed as Architectural heritage of Medellín, including Lido theater, restored in 2007.[3]