A high pressure watertube boiler[1] (also spelled water-tube and water tube) is a type of boiler in which water circulates in tubes heated externally by the fire. Fuel is burned inside the furnace, creating hot gas which heats water in the steam-generating tubes. In smaller boilers, additional generating tubes are separate in the furnace, while larger utility boilers rely on the water-filled tubes that make up the walls of the furnace to generate steam.

The older fire-tube boiler design, in which the water surrounds the heat source and gases from combustion pass through tubes within the water space, is a much weaker structure and is rarely used for pressures above 2.4 MPa (350 psi). A significant advantage of the watertube boiler is that there is less chance of a catastrophic failure: there is not a large volume of water in the boiler nor are there large mechanical elements subject to failure.

A water tube boiler was patented by Blakey of England in 1766 and was made by Dallery of France in 1780.[2]

Owing to their superb working properties, the use of watertube boilers is highly preferred in the following major areas:

Besides, they are frequently employed in power generation plants where large quantities of steam (ranging up to 500 kg/s) having high pressures i.e. approximately 16 megapascals (160 bar) and high temperatures reaching up to 550 °C are generally required. For example, the Ivanpah solar-power station uses two Rentech Type-D watertube boilers.[4]

Modern boilers for power generation are almost entirely water-tube designs, owing to their ability to operate at higher pressures. Where process steam is required for heating or as a chemical component, then there is still a small niche for fire-tube boilers.

Their ability to work at higher pressures has led to marine boilers being almost entirely water-tube. This change began around 1900, and traced the adoption of turbines for propulsion rather than reciprocating (i.e. piston) engines – although watertube boilers were also used with reciprocating engines.

There has been no significant adoption of water-tube boilers for railway locomotives. A handful of experimental designs were produced, but none of these were successful or led to their widespread use.[5] Most water-tube railway locomotives, especially in Europe, used the Schmidt system. Most were compounds, and a few uniflows. The Norfolk and Western Railway's Jawn Henry was an exception, as it used a steam turbine combined with an electric transmission.[6]

Rebuilt completely after a fatal accident

Using a Yarrow boiler, rather than Schmidt. Never successful and re-boilered with a conventional boiler.[7]

A slightly more successful adoption was the use of hybrid water-tube / fire-tube systems. As the hottest part of a locomotive boiler is the firebox, it was an effective design to use a water-tube design here and a conventional fire-tube boiler as an economiser (i.e. pre-heater) in the usual position.

One famous example of this was the USA Baldwin 4-10-2 No. 60000, built in 1926. Operating as a compound at a boiler pressure of 2,400 kilopascals (350 psi) it covered over 160,000 kilometres (100,000 mi) successfully. After a year though, it became clear that any economies were overwhelmed by the extra costs and it was retired to become a stationary plant.[8] A series of twelve experimental locomotives were constructed at the Baltimore and Ohio Railroad's Mt. Clare shops under the supervision of George H. Emerson, but none of them was replicated in any numbers.[9] 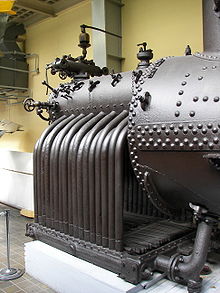 The only railway use of water-tube boilers in any numbers was the Brotan boiler, invented in Austria in 1902 by Johann Brotan and found in rare examples throughout Europe. Hungary, though, was a keen user and had around 1,000 of them. Like the Baldwin, this combined a water-tube firebox with a fire-tube barrel. The original characteristic of the Brotan was a long steam drum running above the main barrel, making it resemble a Flaman boiler in appearance.[10][11]

While the traction engine was usually built using its locomotive boiler as its frame, other types of steam road vehicles such as lorries and cars have used a wide range of different boiler types. Road transport pioneers Goldsworthy Gurney and Walter Hancock both used water-tube boilers in their steam carriages around 1830.

Most undertype wagons used water-tube boilers. Many manufacturers used variants of the vertical cross-tube boiler, including Atkinson, Clayton, Garrett and Sentinel. Other types include the Clarkson 'thimble tube' and the Foden O-type wagon's pistol-shaped boiler.[12]

Many steam cars used water-tube boilers, and the Bolsover Express company even made a water-tube replacement for the Stanley Steamer fire-tube boiler.[13]

The 'D-type' is the most common type of small- to medium-sized boilers, similar to the one shown in the schematic diagram. It is used in both stationary and marine applications. It consists of a large steam drum vertically connected to a smaller water drum (a.k.a. "mud drum") via multiple steam-generating tubes. These are surrounded by walls made up of larger water-filled tubes, which make up the furnace.

The M-Type boilers were used in many US World War II warships including hundreds of Fletcher-class destroyers. Three sets of tubes form the shape of an M, and create a separately fired superheater that allows better superheat temperature control. In addition to the mud drum shown on a D-type boiler, an M-Type has a water-screen header and a waterwall header at the bottom of the two additional rows of vertical tubes and downcomers.

The 'Low Water Content' boiler has a lower and upper header connected by watertubes that are directly impinged upon from the burner. This is a "furnace-less" boiler that can generate steam and react quickly to changes in load. 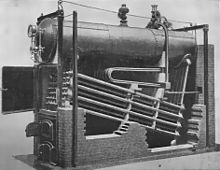 Designed by the American firm of Babcock & Wilcox, this type has a single drum, with feedwater drawn from the bottom of the drum into a header that supplies inclined water-tubes. The watertubes supply steam back into the top of the drum. Furnaces are located below the tubes and drum.

This type of boiler was used by the Royal Navy's Leander-class frigates.

The Stirling boiler has near-vertical, almost-straight watertubes that zig-zag between a number of steam and water drums. Usually there are three banks of tubes in a "four drum" layout, but certain applications use variations designed with a different number of drums and banks.

They are mainly used as stationary boilers, owing to their large size, although the large grate area does also encourage their ability to burn a wide range of fuels. Originally coal-fired in power stations, they also became widespread in industries that produced combustible waste and required process steam. Paper pulp mills could burn waste bark, sugar refineries their bagasse waste. It is a horizontal type of boiler.

End-view of a Yarrow boiler

Named after its designers, the then Poplar-based Yarrow Shipbuilders, this type of three-drum boiler has three drums in a delta formation connected by watertubes. The drums are linked by straight watertubes, allowing easy tube-cleaning. This does, however, mean that the tubes enter the drums at varying angles, a more difficult joint to caulk. Outside the firebox, a pair of 'cold-leg' pipes between each drum act as 'downcomers'.[14]

Due to its three drums, the Yarrow boiler has a greater water capacity. Hence, this type is usually used in older marine boiler applications. Its compact size made it attractive for use in transportable power generation units during World War II. In order to make it transportable, the boiler and its auxiliary equipment (fuel oil heating, pumping units, fans etc.), turbines, and condensers were mounted on wagons to be transported by rail.

The White-Forster type is similar to the Yarrow, but with tubes that are gradually curved. This makes their entry into the drums perpendicular, thus simpler to make a reliable seal.[14] 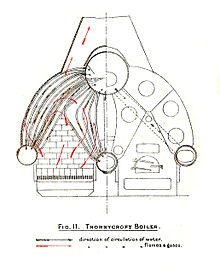 End-view of a Thornycroft boiler

Designed by the shipbuilder John I. Thornycroft & Company, the Thornycroft type features a single steam drum with two sets of watertubes either side of the furnace. These tubes, especially the central set, have sharp curves. Apart from obvious difficulties in cleaning them, this may also give rise to bending forces as the tubes warm up, tending to pull them loose from the tubeplate and creating a leak. There are two furnaces, venting into a common exhaust, giving the boiler a wide base tapering profile.[14]

In a forced circulation boiler, a pump is added to speed up the flow of water through the tubes.[15]