A Bohemian (/boʊˈhiːmiən/) is a resident of Bohemia, today a region of the Czech Republic or the former Kingdom of Bohemia (lands of the Bohemian Crown). In English, the word "Bohemian" was used to denote the Czech people as well as the Czech language before the word "Czech" became prevalent in the early 20th century.[1]

In a separate meaning, "Bohemian" may also denote "a socially unconventional person, especially one who is involved in the arts" according to Oxford Dictionaries Online. (See Bohemianism).[1] 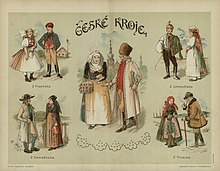 The name "Bohemia" derives from the name of the Boii, a Celtic tribe who inhabited the area towards the latter La Tène period (1st century BCE). The toponym Boiohaemum, first attested by Tacitus[2] around 98 CE, is taken to mean "home of the Boii" (from the Germanic root *haima- "world, home").

The word "Bohemian" has never been widely used by the Czech population. In Czech language, the region since the early Middle Ages has been called Čechy. Another term, stressing the importance of the state/nation, was Království české ("Czech Kingdom"), or Böhmen (Königreich) in German. Its mainly Czech-speaking inhabitants were called Čechové (in modern Czech Češi).

In most Western European vernaculars and Latin (as Bohemi), the word "Bohemian" or a derivative was used. If the Czech ethnic origin was to be stressed, combinations such as "Bohemian of Bohemian language" (Čech českého jazyka), "a real Bohemian" (pravý Čech), etc. were used.

It was not until the 19th century that other European languages began to use words related to "Czechs" (as in English, Tschechen in German, Tchèques in French) in a deliberate (and successful) attempt to distinguish between ethnic Slavic-speaking Bohemians and other inhabitants of Bohemia. The latter were mostly ethnic Germans, who identified as "German Bohemians" (Deutschböhmen) or simply as "Bohemians" (Böhmen). In many parts of Europe, state citizenship was not identical with ethnicity and language, and the various peoples were usually identified by their language. Ethnic boundaries in Bohemia were not always sharp, and people very often were bilingual. Intermarriages across language borders were also common. Native Czech speakers often spoke German and many native German speakers spoke Czech with varying fluency, particularly in areas with many Czech speakers.

Currently, the word "Bohemians" is sometimes used about persons from Bohemia of all ethnic origins, especially before the year 1918, when the Kingdom of Bohemia ceased to exist formally. It is also used to distinguish between inhabitants of the western part (Bohemia proper) of the state (see Bohemia), and the eastern (Moravia, Moravians) or north-eastern (Silesia) parts.

The different but distantly related term "Bohemianism" was associated since early 19th century with "a socially unconventional person, especially one who is involved in the arts", coming from the French bohémien.[1]