Bofors AB (UK: /ˈboʊfərz/ BOH-fərz, US: /ˈboʊfɔːrz/ BOH-forz,[1][2] Swedish: [buːˈfɔʂː])[check vowel length] is a Swedish and British arms manufacturer. The name has been associated with the iron industry and artillery manufacturing for more than 350 years.[3]

Located in Karlskoga, Sweden, the company originates from the hammer mill "Boofors", which was founded as a royal state-owned company in 1646. The modern corporate structure was created in 1873 with the foundation of Aktiebolaget (AB) Bofors-Gullspång.

A leading Swedish steel producer by the early 1870s, when steel began to be used for gun manufacture in Sweden, Bofors initially sold cast and forged steel produced by the Siemens-Martin process to Finspång gun works, but soon started to expand into weapons manufacture. The company's first cannon workshop was opened in 1884. Bofors' most famous owner was Alfred Nobel, who owned the company from 1894 until his death in December 1896.[4] Nobel played a key role in reshaping the former iron and steel producer to a modern cannon manufacturer and chemical industry participant.[5][6] The powder manufacturer AB Bofors Nobelkrut, later an explosives and general organic-chemical producer, was created in 1898 as a wholly owned subsidiary. By 1911, AB Bofors-Gullspång had outcompeted, bought and closed down its Finspång Swedish competitor in cannon manufacture. The company's name was shortened to AB Bofors in 1919.[7]

BAE Systems acquired UDI and its Bofors subsidiary in 2005, and BAE Systems Bofors is now a business unit of BAE Systems AB; Saab Bofors Dynamics is a unit of Saab AB.[9]

The name Bofors is strongly associated with the 40 mm anti-aircraft gun used by both sides during World War II. This automatic cannon is often simply called the Bofors gun and saw service on both land and sea. It became so widely known that anti-aircraft guns in general were often referred to as Bofors guns.[10] Another well-known gun made by the company was the Bofors 37 mm anti-tank gun, a standard anti-tank weapon used by a variety of armies early in the war. It was built under licence in Poland and the United States and was also used in a variety of tanks, including the 7TP and M3A3 Stuart.[11] 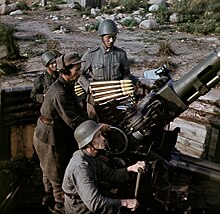 In 1986, the Government of India and Bofors signed a US$285 million contract for the supply of 410 155 mm field howitzers.[12] In 1987, Swedish Radio alleged that Bofors paid illegal commissions of Rs. 60 crores to top Indian politicians, members of the Congress party and key defence officials to seal the deal.[12] The scandal contributed to the defeat of Rajiv Gandhi government in the elections three years later.[13][14]