Indonesian language Jusuf Kalla Susilo Bambang Yudhoyono
This Indonesian name does not have a family name.

listen); born 25 February 1943) is an Indonesian economist and former politician. He is the 11th vice president of Indonesia, in office from 2009 to 2014. He became vice president after winning the 2009 presidential election together with the then-incumbent President Susilo Bambang Yudhoyono.

Boediono was listed as one of the Wharton School's 125 Influential People and Ideas in 2007 and was dubbed "Indonesia's financial rudder".[4] 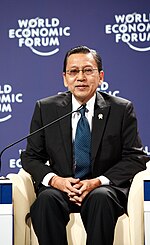 Boediono at the 2011 World Economic Forum

Boediono was a Bank of Indonesia deputy governor in charge of fiscal monetary policy from 1997 to 1998 and served as State Minister of National Planning and Development from 1998 to October 1999.

Following the removal of Abdurrahman Wahid from the presidency in 2001, President Megawati Sukarnoputri appointed Boediono as Minister of Finance in her new administration. Under his leadership, the economy grew by 4% in 2002.[5]

President Susilo Bambang Yudhoyono appointed Boediono as Coordinating Minister for the Economy during his first cabinet reshuffle in 2005, replacing Aburizal Bakrie. Bakrie had come under suspicion for having conflicts of interest.[6] In 2008, a commission of the People's Representative Council elected Boediono Governor of the Indonesian central bank, Bank Indonesia.[7] After he was selected by Yudhoyono as a running mate in the 2009 presidential election, Boediono submitted his resignation from the central bank post.[8]

Boediono is also a professor of economics at Gadjah Mada University where he has taught various courses on macroeconomics and monetary policy since the early 1970s.

Boediono has received honorary degrees from the three Australian universities which he studied at and worked in between the early 1960s and 1970s.

Since his appointment as a staff member in the Faculty of Economics, Gadjah Mada University, in the early 1970s, Boediono has lectured and published widely on topics relating to contemporary issues of economic policy in Indonesia. His publications include the following.

As the vice president of Indonesia, Boediono is automatically bestowed the highest class of 6 out of 7 civilian Star Decorations (Indonesian: Tanda Kehormatan Bintang), namely:[12]