listen);[3][4] Lule Sami: Bådåddjo, Swedish: Bodö) is a municipality in Nordland county, Norway. It is part of the traditional region of Salten. The administrative centre of the municipality is the town of Bodø (which is also the capital of Nordland county). Some of the notable villages in Bodø include Misvær, Skjerstad, Saltstraumen, Løding, Løpsmarka, Kjerringøy, Sørvær, and Fenes. 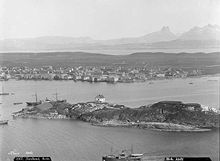 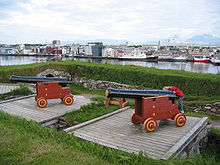 The village of Bodø was granted township status in 1816 and soon after, in 1818, it was known for the Bodø affair, smuggling by British merchants that later were compensated by Norway. The town of Bodø was established as a municipality on 1 January 1838 (see formannskapsdistrikt). On 1 January 1938, a part of the neighboring municipality of Bodin (population: 559) was transferred into the town of Bodø. On 1 January 1959, another part of Bodin (population: 1,303) was transferred into Bodø.

Most of the town of Bodø was destroyed during a Luftwaffe attack on 27 May 1940. Six thousand people were living in Bodø, and 3500 people lost their homes in the attack. Fifteen people lost their lives during the air attack (two British soldiers and 13 Norwegians).[9]

Due to the acute lack of housing, the Swedish Government helped build 107 apartments in the winter of 1941. These houses were built tightly together just outside the town. This small area, today in the heart of Bodø, is still called Svenskebyen ("the Swedish Town"). The town was subsequently rebuilt after the war. The rebuilding ended in 1959 with the completion of the new town hall. German shipping in and around Bodø was attacked in October 1943 in Operation Leader.[9]

The municipality is named after the old Bodøgård farm (Old Norse: Boðvin), since the town was built on its ground. The first element might be boði which means "sunken rock" or "skerry" and the last element is vin which means "meadow" or "pasture". The last element may have been misunderstood as øy which means "island" (and written with the Danish language form ø).[10]

The coat of arms was granted on 24 July 1959. The arms show a yellow sun on a red background. The arms are a representation of the midnight sun and they are a simplified version of the old arms from 1889 which showed a sun above a boat with mountains in the background.[11]

Mjelle in Bodø, a popular beach area when the summer weather is warm

Bodø is a rather compact town. The airport (upper left), the harbour (upper right) and the railway station (lower right) are all within walking distance of each other.

The municipality lies just north of the Arctic Circle where the midnight sun is visible from 1 June to 13 July. Due to atmospheric refraction, there is no true polar night in Bodø, but because of the mountains south of Bodø, the sun is not visible in parts of the municipality from early December to early January. The average number of sun-hours in Bodø is highest in June with 221 hours.[12]

Amongst the strongest tidal currents in the world, with water speeds reaching 22 knots (41 km/h; 25 mph), is Saltstraumen, situated about 30 kilometres (19 mi) southeast of Bodø. The village of Kjerringøy is a well preserved old trading village on the coast about 40 kilometres (25 mi) north of the town of Bodø. With its scenic setting and authentic buildings, several movies have been shot at this little port, including Benoni og Rosa (based on Knut Hamsun's novel), I am Dina, and Telegrafisten.

Located on a peninsula in the Norwegian Sea, the town of Bodø is one of Norway's windiest cities. Despite its location just north of the Arctic Circle, Bodø features a Subpolar oceanic climate (Cfc), with chilly (but not cold) winters and cool summers. Snow cover during winter varies and is often sparse in the city center, but only slightly inland the snow cover is much more reliable. The "midnight sun" is above the horizon from 1 June to 14 July (44 days), and the period with continuous daylight lasts a bit longer.

The all-time low was recorded in February 1966, which was the coldest month on record with a mean of −8.9 °C (16.0 °F). The all-time high was recorded in July 2019, while July 2014 was the warmest month on record with a 24-hr mean of 17.3 °C (63.1 °F). Recent decades have seen warming, and there has been no overnight air frost in June since 1981. Under the Köppen Climate Classification Bodø sits on the border between "Cfb" (Oceanic) and "Cfc" (Subpolar Oceanic Climate); with its location on the Arctic Circle the city features one of the largest latitudinal temperature anomalies on Earth. Data in table below is from Bodø Airport, summer daily highs are often warmer in the city center. 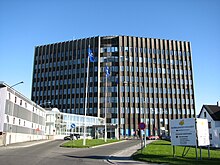 Nordlandssykehuset is the main county hospital

Besides Saltstraumen, the municipality of Bodø has much wilderness for hikers. About 10 kilometres (6.2 mi) north of the town of Bodø lies the popular recreation area Geitvågen. The area is inhabited by a large number of white-tailed eagles. Sjunkhatten National Park is partly located in Bodø municipality, and there are also 17 nature reserves. Sundstraumlian nature reserve has undisturbed mixed forest with marble bedrock,[16] Skånland with coastal pine forest,[17] Børvatnet protecting a birch forest with many orchids,[18] and Bliksvær nature reserve with well-preserved coastal nature of many types and a rich bird life, making it a Ramsar site as well.[19]

All municipalities in Norway, including Bodø, are responsible for primary education (through 10th grade), outpatient health services, senior citizen services, unemployment and other social services, zoning, economic development, and municipal roads. The municipality is governed by a municipal council of elected representatives, which in turn elect a mayor.[20] The municipality falls under the Salten District Court and the Hålogaland Court of Appeal.

The municipal council (Kommunestyre) of Bodø is made up of 39 representatives that are elected to four year terms. The party breakdown of the council is as follows:

As the northern terminus of the Nordland Line, the town of Bodø is the northern end of Vy network. However, travellers going further north will often switch to a connecting bus in the nearby town of Fauske bound for the town of Narvik. There is also a railway from Narvik to Kiruna in Sweden, and further into the Swedish rail network. Bodø Station was completed in 1961. Bodø Airport lies just south of the city centre and was opened in 1952. The airport served 1,733,330 passengers in 2015 and is the site of Bodø Air Traffic Control Center. The airline Widerøe has its head office in Bodø.[45] Ferries run between Bodø and the Lofoten Islands to the west. 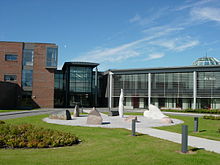 The main campus of Nord University is located 10 kilometres (6.2 mi) outside the city centre. Twelve thousand undergraduate and graduate students study at the university.[46]

Bodø is the location of the only police academy in Norway outside Oslo. The Norwegian Civil Aviation Authority is situated in Bodø, as is the Joint Rescue Coordination Centre of Northern Norway. The Norwegian Armed Forces headquarters for North Norway is located at Reitan, east of the city. SB Nordlandsbuss has its headquarters in Bodø, as does Bodø Energi and Nordlandsbanken.

The largest shopping centre in Nordland, City Nord, is located in the town of Bodø.[47]

Bodø has a long history with the Norwegian Armed Forces, and especially the Royal Norwegian Air Force (RNoAF). The Norwegian Armed Forces Joint Operational Headquarters are located at Reitan, east of Bodø. Parts of NATO air forces attending the annual Cold Response are stationed at Bodø Main Air Station. Bodø MAS is a major Norwegian military air base, housing two-thirds of Norway's F-16 fighter force and two of RNoAFs SAR Sea Kings. Bodø, competing with Ørland and Evenes, is a candidate for the Northern Air Base in the new RNoAF system.

Bodin Leir located near the air station was an RNoAF recruit school including Norwegian Advanced Surface to Air Missile System personnel and a national response unit. The base was central during the Cold War due to its strategic location and proximity to the Soviet Union. It would have been vital in the build-up of NATO air and land forces to defend Norway, and thus the entire northern flank of NATO, in a war with the Warsaw Pact. It could also have been used as a forward base for American bombers to strike targets in the Soviet Union. Now Bodin Leir is an camp to house military personnel for The Norwegian Joint Headquarters and Bodø Main Air Station.

Bodø received international attention during the U-2 Crisis in May 1960, when it became known that the American U-2 pilot Gary Powers had been shot down over the Soviet Union on his way from Pakistan to Bodø.

The Norwegian Aviation Museum and Salten Museum are located in Bodø. Salten Museum has four exhibitions: The Lofoten Fisheries, a Sami exhibit, a Viking treasure, and an exhibition about Bodø's history from 1816 to 2000.

The Bodø Cathedral was built in 1956, representing post-war architecture, whereas the Bodin Church just outside the city centre dates from the 13th century, representing a typical medieval stone church.

The new cultural centre "Stormen" (the storm) was opened in 2014. It contains a library, a concert hall and theater. The building was designed by Daniel Rosbottom and David Howarth from London-based DRDH Architects.

Bodø is host to the cultural festivals Nordland Musikkfestuke, Parkenfestivalen and the Opptur festival every summer, as well as the free and volunteer based Bodø Hardcore Festival in early winter.

Fram Kino was the first cinema in Norway. It was started in the year 1908. 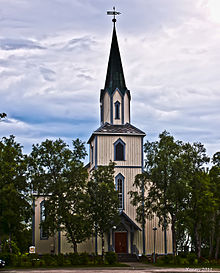 The Church of Norway has six parishes (sokn) within the municipality of Bodø. It is part of the Bodø domprosti (arch-deanery) in the Diocese of Sør-Hålogaland.

Bodø's main professional team is the football club Bodø/Glimt, playing in Eliteserien, the top division of football in Norway.

The most well-known sporting arena in Bodø is Aspmyra Stadion, which in addition to being the home of Bodø/Glimt has hosted one international match. Also, the multi-purpose indoor Bodø Spektrum, contains full-size football and handball courts, as well as several swimming and bathing facilities.

The town is also home of Bodø Barbarians, a leading rugby league team.[48]