The first bobsleds were built in St. Moritz, Switzerland, in the late 19th century by wealthy tourists from Victorian Britain who were staying at the Palace Hotel owned by Caspar Badrutt. The early sleds were adapted from boys' delivery sleds and toboggans. These eventually evolved into bobsleighs, luges and skeletons. Initially the tourists would race their hand-built contraptions down the narrow streets of St. Moritz, however, as collisions increased growing opposition from St Moritz residents led to bobsledding being eventually banned from public highways. In the winter of 1884, Badrutt had a purpose-built run constructed near the hamlet of Cresta. The Cresta Run remains the oldest in the world and is the home of the St. Moritz Tobogganing Club. It has hosted two Olympic Winter Games and is still in use.

Modern bobsleigh teams compete to complete a downhill route in the fastest times. An aggregate time from several runs is used to determine the winners. The four-man event has been featured since the first Winter Games in 1924 in Chamonix, France. The only exception was the 1960 games in Squaw Valley when the organizing committee decided not to build a track to reduce costs. The two-man event was introduced at the 1932 games and a two-woman event was first contested at the 2002 Winter Olympics.

The name is derived from the action some early competitors adopted of bobbing back and forth inside their sleds to increase speed.[1] 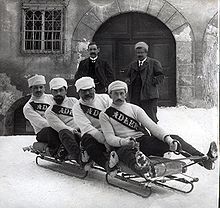 Although sledding on snow or ice had long been popular in many northern countries, the origins of bobsleighing as a modern sport are relatively recent.

Its foundation began when hotelier Caspar Badrutt (1848–1904) convinced some wealthy English regulars to remain through the entire winter at his hotel in the mineral spa town of St. Moritz, Switzerland. He had been frustrated that his hotel was only busy during the summer months. By keeping his guests entertained with food, alcohol, and activities, he quickly established the concept of "winter resorting". Within a few years, wintering at Badrutt's St Moritz hotel became very fashionable in Victorian Britain. However, with increased numbers this led some guests to search for new diversions. In the early 1870s some adventurous Englishmen began adapting boys' delivery sleds for recreational purposes.[2]

However, when they began colliding with pedestrians in the icy lanes, alleyways and roads of St Moritz, this led to the invention of "steering means" for the sleds. The basic bobsleigh (bobsled) consisted of two cresta's (skeleton sleds) attached together with a board that had a steering mechanism at the front. The ability to steer meant the sleds could make longer runs through the town. Longer runs also meant higher speeds on curves. Local sentiments varied about these informal competitions but eventually complaints grew so vociferous that Badrutt had to do something. His solution was to build a basic natural ice run for his guests outside the town near the small hamlet named Cresta in the lates 1870s. Badrutt took action because he did not want to make enemies in the town and he had worked hard and investing a lot of time and money in popularizing wintering in St. Moritz so he was not going to let customers stop coming due to boredom.[2]

Formal competitions started down the natural ice Cresta Run in 1884, which was built in an annual partnership between guests and local people. The run, which is still in operation as of 2014[update], has served as a host track for skeleton at two Winter Olympics (1928 and 1948). As one of the few natural weather tracks in the world, it does not use artificial refrigeration. It is not known how much the original track evolved in the early years as the three sports matured and stabilized. The first club formed in 1897, and the first purpose-built track solely for bobsleds opened in 1902 outside St Moritz. Over the years, bobsleigh tracks evolved from straight runs to twisting and turning tracks. The original wooden sleds[3] gave way to streamlined fiberglass and metal ones.

Germany and Switzerland have proven the most successful bobsleighing nations measured by overall success in European, World, World Cup, and Olympic championships. Since the 1990s Germans have dominated in international competition, having won more medals than any other nation. Italy, Austria, United States and Canada also have strong bobsleigh traditions.

Modern tracks are made of concrete, coated with ice. They are required to have at least one straight section and one labyrinth (three turns in quick succession without a straight section). Ideally, a modern track should be 1,200 to 1,300 metres (3,900–4,300 ft) long and have at least fifteen curves. Speeds may exceed 120 kilometres per hour (75 mph), and some curves can subject the crews to as much as 5 g.

Some bobsleigh tracks are also used for luge and skeleton competition.

Team USA on a wall, Shauna Rohbock (pilot) and Valerie Fleming (brakes) during their 2006 silver run on Cesana Pariol, Italy

Modern day sleighs combine light metals, steel runners, and an aerodynamic composite body. Competition sleighs must be a maximum of 3.80 metres (12.5 ft) long (4-crew) or 2.70 metres (8.9 ft) long (2-crew). The runners on both are set at 0.67 metres (2.2 ft) gauge. Until the weight-limit rule was added in 1952, bobsleigh crews tended to be very heavy to ensure the greatest possible speed. Nowadays, the maximum weight, including crew, is 630 kilograms (1,390 lb) (4-man), 390 kilograms (860 lb) (2-man), or 340 kilograms (750 lb) (2-woman), which can be reached via the addition of metal weights. The bobsleighs themselves are designed to be as light as possible to allow dynamic positioning of mass through the turns of the bobsleigh course.[5]

Although bobsleigh crews once consisted of five or six people, they were reduced to two- and four-person sleighs in the 1930s. The crew has a pilot, a brakeman, and pushers. Athletes are selected based on their speed and strength, which are necessary to push the sleigh to a competitive speed at the start of the race. Pilots must have the skill, timing, and finesse to steer the sleigh along the path, or "line", that will produce the greatest speed.

In modern bobsleighs, the steering system consists of two metal rings that actuate a pulley system located in the forward cowling that turns the front runners. For example, to turn left, the pilot would pull the left ring. Only subtle steering adjustments are necessary to guide the sled; at speeds up to 80 miles per hour (130 km/h), anything larger would result in a crash. The pilot does most of the steering, and the brakeman stops the sled after crossing the finish line by pulling the sled's brake lever.

Women compete in women's bobsleigh (which is always two-woman) and men in both two and four-man competitions.[6] Women were confirmed as being able to compete in any four-"man" bobsleigh event, as from 25 September 2014, either as part of a mixed-sex team or an all-female team.

Individual runs down the course, or "heats", begin from a standing start, with the crew pushing the sled for up to 50 metres (160 ft) before boarding; though the pilot does not steer, grooves in the ice make steering unnecessary until the sled leaves the starting area. While poor form during the initial push can lose a team the heat, it is otherwise rarely, if ever, decisive. Over the rest of the course, a sleigh's speed depends on its weight, aerodynamics, runners, the condition of the ice, and the skill of the pilot.

Race times are recorded in hundredths of seconds, so even seemingly minor errors – especially those at the beginning, which affect the remainder of the heat – can have a measurable impact on the final race standings.

The men's and women's standings for normal races are calculated over the aggregate of two runs or heats. At the Olympic Winter Games and World Championships, all competitions (for both men and women) consist of four heats. 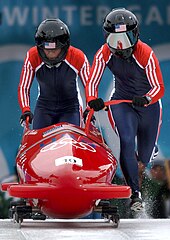 Vonetta Flowers (left) and Jill Bakken power up in the push zone for their 80-mile-per-hour (130 km/h) ride down the Winter Olympic bobsledding track. Bakken, the driver, and Flowers, the brakeman, won the first gold medal presented in Olympic women's bobsledding (2002).
Main article: Bobsleigh at the Winter Olympics
Further information: List of Olympic medalists in bobsleigh

Sledding at a competitive level involves sledders repeatedly subjecting themselves to high-G forces and multiple small collisions of their head into their helmet as sharp turns are taken. Additionally, when mistakes happen and the sled crashes, there are no "seatbelts" or other protections; the sledders can simply be falling down the course at high speed with their helmet grinding along the surface or bouncing off the interior of the sled. One sledder described his experience during crashes as being equivalent to his head being inside a jet engine.[7] Even ignoring crashes, repetitive shaking from small imperfections in the course are hypothesized to cause small tears in the brain, especially if performed repeatedly.[8] The culture of competitive bobsledders (especially before this danger was recognized) also made injured participants hesitant to speak up and request breaks, fearful of being dropped from the team.[8] Bobsledders who train frequently have reported issues such as chronic headaches, a heightened sensitivity to bright lights and loud noises, forgetfulness, a "mental fog", and psychological problems. Repeated mild brain trauma has caused issues for boxers, rugby players, and football players with chronic traumatic encephalopathy, and fears have arisen that bobsledding carries a similar danger, at least with the steeper and faster courses used in competitions.[7] A brain scan of one bobsledder revealed damage to the rear and frontal lobes, consistent with micro tears in the brain's white matter.[7]

An alarming number of athletes have either committed suicide or died of drug overdoses. Examples include medal-winning bobsledders Eugenio Monti and Pavle Jovanovic, who committed suicide; Steven Holcomb died of an overdose. Since 2013, three former North American bobsledders have taken their lives, another attempted it, and two others died of overdoses; this is far over expectation of the group from chance, as only a few hundred athletes participate seriously in bobsled and other sliding sports such as luge and skeleton at any one time.[8]