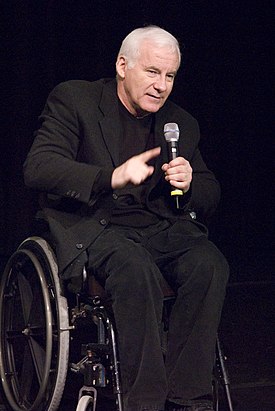 He was born on Long Island, and grew up in Great Neck, New York and attended Hofstra University. He enlisted in the U.S. Marine Corps in 1967, during the Vietnam War. His commission with the Marines began the same day he received his bachelor's degree in business administration from Hofstra University in 1968, and by September of that year he was a combat lieutenant leading a Marine infantry platoon. In April 1969, while leading an assault in Vietnam, a bullet entered his chest and severed his spinal cord, leaving him paralyzed from the chest down.

After returning from Vietnam, Muller became a staunch advocate for veterans' rights and Peace activist. In 1974 he earned his J.D. degree from the Hofstra University School of Law. In the same year, he appeared in the anti-war documentary film Hearts and Minds, speaking about his life before, during, and after the Vietnam War. He founded Vietnam Veterans of America (VVA) in 1978 and Vietnam Veterans of America Foundation (VVAF) in 1980. The VVAF co-founded the International Campaign to Ban Landmines, which won a 1997 Nobel Peace Prize.

In 2004, Muller founded Alliance for Security. He is currently serving as an advisory board member for a group called Operation Truth and for the Military Religious Freedom Foundation.[1]

Muller is a friend of Bill Wieman, Mark Clevinger, and Ron Kovic. He has lectured about his experiences on over 100 college campuses.

In a 1997 MSNBC NewsChat segment Muller debated Ann Coulter. Muller attempted to explain to Ann that "In 90 percent of cases that U.S. soldiers got blown up—Ann, are you listening?—they were our own mines." She interrupted Muller's point about the role that landmines played in the Vietnam War with the statement "No wonder you guys lost." Muller responded to Coulter's remark with an incredulous "Say that again," while moderator Felicia Taylor sharply rebuked the in-house pundit: "OK, we're not going to get into that conversation. Ann, that was unnecessary! Mr. Muller, please continue...."[2]

Muller was misquoting a 1969 Pentagon report that found that 90 percent of the components used in enemy mines came from U.S. duds and refuse. Coulter, who found Muller's statement laughable, averted her eyes and responded sarcastically: "No wonder you guys lost." It became an infamous—and oft-misreported—Coulter moment. The Washington Post and others turned the line into a more personal attack: "People like you caused us to lose that war."[3]