Boa Vista (Brazilian Portuguese: [ˈbo(w.w)ɐ ˈvistɐ],[2] Good View) is the capital of the Brazilian state of Roraima. Situated on the western bank of the Branco River, the city lies 220 km (140 mi) from Brazil's border with Venezuela. It is the only Brazilian state capital located entirely north of the equator.

Boa Vista is the most populous municipality in the state of Roraima;[3] approximately half of the population of the state lives in the city. Commerce mostly occurs with Manaus, the capital of the State of Amazonas. Business also takes place between Boa Vista and with the cities of Lethem, in Guyana and Santa Elena de Uairén, in Venezuela. These two foreign cities are the only major cities that can be accessed from Boa Vista by road, although roads connect other smaller state municipalities with the capital city. Travel by airplane is the only means of transportation with other regions of the country.

As a modern city, Boa Vista stands out among the other capitals of the North Region of Brazil as it is a planned city with a radial plan. It was planned by the architect Darci Aleixo Derenusson who based his design for the city on one that is similar to that of Paris, France.[citation needed] The city was built under the direction of Captain Ene Garcez, the first governor of Roraima. 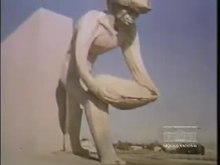 The municipality of Boa Vista formed the first urban area of the state of Roraima. The São Joaquim do Rio Branco Fort, founded in 1775, is located on the banks of the Uraricoera River about 32 km from the capital and is considered to be of great importance to the region.

The city was created on July 9, 1890 as Boa Vista do Rio Branco. It was founded by Augusto Villeroy (Amazonas's Governor). The first mayor was João Capistrano da Silva Mota, also known as Coronel Mota. After the mayor, two councillors (José Francisco Coelho and José Gonzaga de Souza Junior) were appointed.

In 1943, during the middle of World War II, Boa Vista became the capital of the recently created Federal Territory of Rio Branco. The territory grew from mining operations in the area. The then Federal Territory of Rio Branco was elevated to statehood, later being renamed as "Roraima". Later, machine-based mining was prohibited (because of the resulting damage to the landscape), which ended up hindering the economy of the state and the municipality.

In the 2010s, the crisis in Venezuela led to the population swelling by around 50,000 Venezuelan immigrants.[4]

Boa Vista experiences a tropical savanna climate (Koppen Aw), with a hot, humid wet season and a very warm dry season. Being the only major Brazilian city north of the equator, the wettest and driest months in Boa Vista are the reverse of the rest of the Amazonian region of Brazil, with a hot, humid, rainy period from April to November and a very warm, dry period from December to March. Temperatures fluctuations are relatively unsubstantial throughout the year.

The Maracá Ecological Station was established by presidential decree on 2 June 1981. The station consists of the island of Maracá between the Santa Rosa and Maracá branches of the Uraricoera River in the municipality of Boa Vista, and has an area of 101,312 hectares (250,350 acres).[5] The strictly protected area was established with the purpose of preserving a representative sample of the Amazon ecosystem.[6] 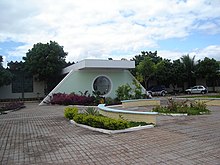 Portuguese is the official national language, and the primary language taught in schools. But English and Spanish are part of the official high school curriculum. 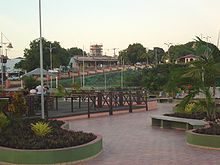 Festa Junina was introduced to Northeastern Brazil by the Portuguese for whom St John's day (also celebrated as Midsummer Day in several European countries), on the 24th of June, is one of the oldest and most popular celebrations of the year. The festivities traditionally begin after the 12th of June, on the eve of St Anthony's day, and last until the 29th, which is Saint Peter's day. During these fifteen days, there are bonfires, fireworks, and folk dancing in the streets (step names are in French, which shows the mutual influences between court life and peasant culture in the 17th, 18th, and 19th-century Europe). Once exclusively a rural celebration, today, in Brazil, it is now largely a city festival. 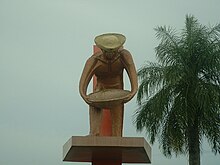 The Civic Center, built in the form of an opened fan, starts from the banks of the Rio Branco. This design was created by the engineer Darci Aleixo Deregusson during Ene Garcez's government, the first of its kind in Roraima.

From the Civic Center runs a system of 16 avenues, with inspiration drawn from Paris, France, Belo Horizonte, and Goiânia, Brazil. In this square are the head offices of the Executive, Judicial and Legislative branches of the state government. Other buildings of significance are the Palace of Culture, the Amazônia Bank, the Ministry of Education, and a cathedral.

The civic center also showcases a monument to the miners who were the first inhabitants of this land.

Initially, indigenous people were the only inhabitants of Boa Vista. Boa Vista had the highest growth rate of any Brazilian capital in the 1970s, at 3% per year. What attracts immigrants most to this city are employment opportunities generated by public service jobs for Brazilians. General commercial opportunities attract immigrants from neighboring countries. In 1950 Boa Vista had about 5,200 inhabitants. This number has grown 47 fold in only 56 years to approximately 250,000 inhabitants.

According to the Brazilian Institute of Geography and Statistics (IBGE), Boa Vista had more than 375,000 inhabitants in 2018. The city grew more than 10% in just one year due mainly to Venezuelan immigration.

There are several professional football clubs in Boa Vista:

The city's most important stadium is Estádio Flamarion Vasconcelos, better known as Canarinho, located in the neighborhood of the same name, Canarinho. The stadium, which located in the southern part of Boa Vista, has a maximum capacity of 10,000 people.

Also located in Boa Vista is the Estádio Raimundo Ribeiro de Souza, better known as the Ribeirão, which is located in a suburb of the city.

Boa Vista is served by Boa Vista-Atlas Brasil Cantanhede International Airport with direct flights to Brasília, Georgetown (Guyana), and Manaus. Boa Vista International Airport was opened on February 19, 1973, and underwent major remodelings in 1998 and 2009. The passenger terminal, runway and apron were all enlarged, and a separate taxiway was built. 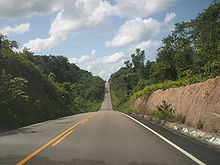 The federal government has started a project to link Boa Vista by road to Manaus and then by extension to the major centers of Brazil, by asphalting the BR-174 and building several bridges in the Amazon forest, allowing a direct road link to Manaus and then on over the BR-319 to the central regions of Brazil.[18]