A blizzard is a severe snowstorm characterized by strong sustained winds of at least 56 km/h (35 mph) and lasting for a prolonged period of time—typically three hours or more. A ground blizzard is a weather condition where snow is not falling but loose snow on the ground is lifted and blown by strong winds. Blizzards can have an immense size and usually stretch to hundreds or thousands of kilometres.

In the United States, the National Weather Service defines a blizzard as a severe snow storm characterized by strong winds causing blowing snow that results in low visibilities. The difference between a blizzard and a snowstorm is the strength of the wind, not the amount of snow. To be a blizzard, a snow storm must have sustained winds or frequent gusts that are greater than or equal to 56 km/h (35 mph) with blowing or drifting snow which reduces visibility to 400 m or 0.25 mi or less and must last for a prolonged period of time—typically three hours or more.[1][2]

While severe cold and large amounts of drifting snow may accompany blizzards, they are not required. Blizzards can bring whiteout conditions, and can paralyze regions for days at a time, particularly where snowfall is unusual or rare.

The Australia Bureau of Meteorology describes a blizzard as, "Violent and very cold wind which is laden with snow, some part, at least, of which has been raised from snow covered ground." [4]

The Oxford English Dictionary concludes the term blizzard is likely onomatopoeic, derived from the same sense as blow, blast, blister, and bluster; the first recorded use of it for weather dates to 1829, when it was defined as a "violent blow". It achieved its modern definition by 1859, when it was in use in the western United States. The term became common in the press during the harsh winter of 1880–81.[5] 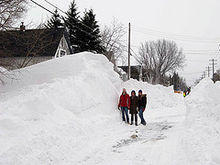 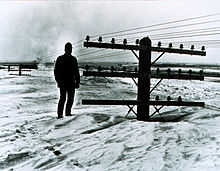 In the United States, storm systems powerful enough to cause blizzards usually form when the jet stream dips far to the south, allowing cold, dry polar air from the north to clash with warm, humid air moving up from the south.[2][6]

When cold, moist air from the Pacific Ocean moves eastward to the Rocky Mountains and the Great Plains, and warmer, moist air moves north from the Gulf of Mexico, all that is needed is a movement of cold polar air moving south to form potential blizzard conditions that may extend from the Texas Panhandle to the Great Lakes and Midwest. A blizzard also may be formed when a cold front and warm front mix together and a blizzard forms at the border line.

Conditions approaching a blizzard whiteout in Minnesota, on March 1, 2007. Note the unclear horizon near the center.

Low pressure systems moving out of the Rocky Mountains onto the Great Plains, a broad expanse of flat land, much of it covered in prairie, steppe and grassland, can cause thunderstorms and rain to the south and heavy snows and strong winds to the north. With few trees or other obstructions to reduce wind and blowing, this part of the country is particularly vulnerable to blizzards with very low temperatures and whiteout conditions. In a true whiteout there is no visible horizon. People can become lost in their own front yards, when the door is only 3 m (10 ft) away, and they would have to feel their way back. Motorists have to stop their cars where they are, as the road is impossible to see. 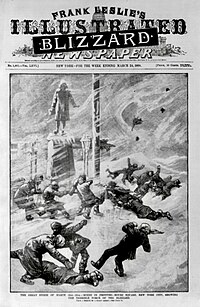 Illustration of the Great Blizzard of 1888

A nor'easter is a macro-scale storm that occurs off the New England and Atlantic Canada coastlines. It gets its name from the direction the wind is coming from. The usage of the term in North America comes from the wind associated with many different types of storms some of which can form in the North Atlantic Ocean and some of which form as far south as the Gulf of Mexico. The term is most often used in the coastal areas of New England and Atlantic Canada. This type of storm has characteristics similar to a hurricane. More specifically it describes a low-pressure area whose center of rotation is just off the coast and whose leading winds in the left-forward quadrant rotate onto land from the northeast. High storm waves may sink ships at sea and cause coastal flooding and beach erosion. Notable nor'easters include The Great Blizzard of 1888, one of the worst blizzards in U.S. history. It dropped 100–130 cm (40–50 in) of snow and had sustained winds of more than 45 miles per hour (72 km/h) that produced snowdrifts in excess of 50 feet (15 m). Railroads were shut down and people were confined to their houses for up to a week. It killed 400 people, mostly in New York.[7]

The 1972 Iran Blizzard, which caused 4,000 reported deaths, was the deadliest blizzard in recorded history. Dropping as much as 26 feet (7.9 m) of snow, it completely covered 200 villages. After a snowfall lasting nearly a week, an area the size of Wisconsin was entirely buried in snow.[8][9] 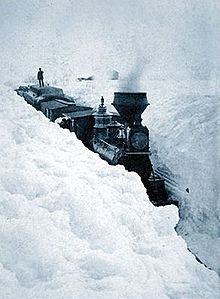 A snow blockade in southern Minnesota, central US. On March 29, 1881, snowdrifts in Minnesota were higher than locomotives.

The winter of 1880–1881 is widely considered the most severe winter ever known in parts of the United States. Many children—and their parents—learned of "The Snow Winter" through the children's book The Long Winter by Laura Ingalls Wilder, in which the author tells of her family's efforts to survive. The snow arrived in October 1880 and blizzard followed blizzard throughout the winter and into March 1881, leaving many areas snowbound throughout the entire winter. Accurate details in Wilder's novel include the blizzards' frequency and the deep cold, the Chicago and North Western Railway stopping trains until the spring thaw because the snow made the tracks impassable, the near-starvation of the townspeople, and the courage of her future husband Almanzo and another man, who ventured out on the open prairie in search of a cache of wheat that no one was even sure existed.

The October blizzard brought snowfalls so deep that two-story homes had snow up to the second floor windows. No one was prepared for the deep snow so early in the season and farmers all over the region were caught before their crops had even been harvested, their grain milled, or with their fuel supplies for the winter in place. By January the train service was almost entirely suspended from the region. Railroads hired scores of men to dig out the tracks but it was a wasted effort: As soon as they had finished shoveling a stretch of line, a new storm arrived, filling up the line and leaving their work useless. 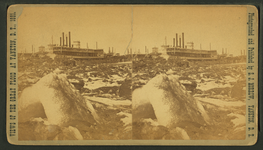 Stereoscopic view card showing "Blasting ice with dynamite from in front of steamer on the ways, by Stanley J. Morrow" ~ A view of Yankton's riverfront after the flood of March 1881.

There were no winter thaws and on February 2, 1881, a second massive blizzard struck that lasted for nine days. In the towns the streets were filled with solid drifts to the tops of the buildings and tunneling was needed to secure passage about town. Homes and barns were completely covered, compelling farmers to tunnel to reach and feed their stock.

When the snow finally melted in late spring of 1881, huge sections of the plains were flooded. Massive ice jams clogged the Missouri River and when they broke the downstream areas were ravaged. Most of the town of Yankton, in what is now South Dakota, was washed away when the river overflowed its banks.[10][11]

The Storm of the Century 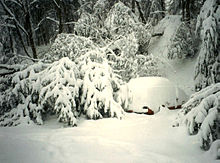 Under the weight of snow, a tree falls next to a car in Asheville, North Carolina

The Storm of the Century, also known as the Great Blizzard of 1993, was a large cyclonic storm that formed over the Gulf of Mexico on March 12, 1993, and dissipated in the North Atlantic Ocean on March 15. It is unique for its intensity, massive size and wide-reaching effect. At its height, the storm stretched from Canada towards Central America, but its main impact was on the United States and Cuba. The cyclone moved through the Gulf of Mexico, and then through the Eastern United States before moving into Canada. Areas as far south as northern Alabama and Georgia received a dusting of snow and areas such as Birmingham, Alabama, received up to 12 in (30 cm) [12] with hurricane-force wind gusts and record low barometric pressures. Between Louisiana and Cuba, hurricane-force winds produced high storm surges across northwestern Florida, which along with scattered tornadoes killed dozens of people. In the United States, the storm was responsible for the loss of electric power to over 10 million customers. It is purported to have been directly experienced by nearly 40 percent of the country's population at that time. A total of 310 people, including 10 from Cuba, perished during this storm. The storm cost $6 to $10 billion in damages.