Advertisement - You can get this game from STEAM
For other uses, see Black ice (disambiguation).
Thin coating of glazed ice on a surface 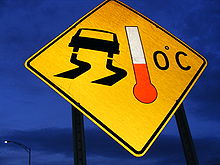 Black ice, sometimes called clear ice, is a thin coating of glaze ice on a surface, especially on roads. The ice itself is not black, but visually transparent, allowing the often black road below to be seen through it. The typically low levels of noticeable ice pellets, snow, or sleet surrounding black ice means that areas of the ice are often practically invisible to drivers or people stepping on it. There is, thus, a risk of slippage and subsequent accident due to the unexpected loss of traction.

The term "black ice" in the United States is often incorrectly used to describe any type of ice that forms on roadways, even when standing water on roads turns to ice as the temperature falls below freezing. Correctly defined, black ice is formed on relatively dry roads, rendering it invisible to drivers. It occurs when the textures present in all pavements very slightly below the top of the road surface contain water or moisture, thereby presenting a dry surface to tires until that water or moisture freezes and expands; drivers then find they are riding above the road surface on a honeycombed invisible sheet of ice.

Three other definitions of black ice by the World Meteorological Organization are:[1]

On roads and pavements

The American Meteorological Society Glossary of Meteorology includes the definition of black ice as "a thin sheet of ice, relatively dark in appearance, [that] may form when light rain or drizzle falls on a road surface that is at a temperature below 0 °C (32 °F)."[2] Because it represents only a thin accumulation, black ice is highly transparent and thus difficult to see as compared with snow, frozen slush, or thicker ice layers. In addition, it often is interleaved with wet pavement, which is nearly identical in appearance. This condition makes driving, cycling or walking on affected surfaces extremely dangerous. Deicing with salt (sodium chloride) is effective down to temperatures of about −18 °C (0 °F). Other compounds such as magnesium chloride or calcium chloride have been used for very cold temperatures since the freezing-point depression of their solutions is lower.

At low temperatures (below −18 °C [0 °F]), black ice can form on roadways when the moisture from automobile exhaust condenses on the road surface.[3] Such conditions caused multiple accidents in Minnesota when the temperatures dipped below −18 °C (0 °F) for a prolonged period of time in mid-December 2008.[4] Salt's ineffectiveness at melting ice at these temperatures compounds the problem. Black ice may form even when the ambient temperature is several degrees above the freezing point of water 0 °C (32 °F), if the air warms suddenly after a prolonged cold spell that has left the surface of the roadway well below the freezing point temperature.

On December 1, 2013, heavy post-Thanksgiving weekend traffic encountered black ice on the westbound I-290 expressway in Worcester, Massachusetts. A chain reaction series of crashes resulted, involving three tractor-trailers and over 60 other vehicles. The ice formed suddenly on a long downward slope, surprising drivers coming over the crest of a hill, who could not see crashed vehicles ahead until it was too late to stop on the slick pavement.[5] 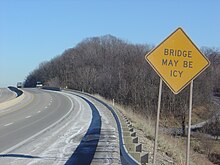 Bridges and overpasses can be especially dangerous. Black ice forms first on bridges and overpasses because air can circulate both above and below the surface of the elevated roadway when the ambient temperature drops, causing the bridge pavement temperature to fall more rapidly.[6] In the United States, road warning signs with the advisory Bridge May Be Icy indicate potentially dangerous roadways above bridge structures.

Similar road signs exists throughout Canada, but warnings sometimes appear without words to comply to bilingual requirements. The Canadian sign features a vehicle with skid marks and snow flakes. The same sign's official and undisclosed description is defined as "Pavement is slippery when wet".[7]

Additional signs may be attached with various different wording in Canadian provinces that do not have bilingual requirements: 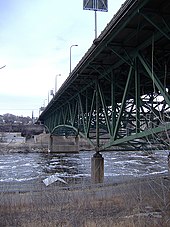 The I-35W Mississippi River bridge seen from below in 2006

The I-35W Mississippi River bridge in Minneapolis, Minnesota, was well known for its black ice before it collapsed in 2007 into the Mississippi River. It had caused several pileups during its 40-year life. On December 19, 1985, the temperature reached −34 °C (−29 °F). Cars crossing the bridge experienced black ice and there was a massive pile up of crashed vehicles on the bridge on the northbound side. In February and in December 1996, the bridge was identified as the single most treacherous cold-weather spot in the local freeway system, because of the almost frictionless thin layer of black ice that regularly formed when temperatures dropped below freezing. The bridge's proximity to Saint Anthony Falls contributed significantly to the icing problem and the site was noted for frequent spinouts and collisions.[8][9]

By January 1999, Mn/DOT began testing magnesium chloride solutions and a mixture of magnesium chloride and a corn-processing byproduct to see whether either would reduce the black ice that appeared on the bridge during the winter months.[10] In October 1999, the state embedded temperature-activated nozzles in the bridge deck to spray the bridge with potassium acetate solution to keep the area free of winter black ice.[11][12] The system came into operation in 2000.[13][14] 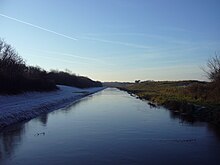 Black ice on a canal in the Netherlands

When the temperature is below freezing and the wind is calm, such as under a high atmospheric pressure at night in the fall, a thin layer of ice will form over open water of a lake. If the depth of the body of water is large enough, its color is black and can be seen through the ice, thus the name black ice.

Ice can also be formed by seawater spray and water vapour freezing upon contact with a vessel's superstructure when temperature is low enough. Ice formed in this manner is known as rime.[15] As the formation progress, the aboveboard weight of the vessel increases and may ultimately cause capsizing. Furthermore, rime ice may impede the correct functioning of important navigational instruments on board, such as radar or radio installations. Different strategies for the removal of such ice are employed: chipping away the ice or even using fire hoses in an attempt to remove the ice.

Black ice is a great hazard for climbers and scramblers. Cold weather is common at high altitudes, and black ice quickly forms on rock surfaces. Loss of traction is as sudden and unexpected as on a pavement or road, but can be fatal if the rock is in an exposed position with a drop below. An ice-axe and crampons are essential use in such circumstances as they will help to prevent a fall, and a belay rope will help to arrest a fall.